By KATE PICKETT and RICHARD WILKINSON for openDemocracy

Inequality creates the social and political divisions that isolate us from each other.

When people are asked what matters most for their happiness and wellbeing, they tend to talk about the importance of their relationships with family, friends and colleagues. It is their intimate world, their personal networks that mean the most to them, rather than material goods, income or wealth.

Most people probably don’t think that broader, structural issues to do with politics and the economy have anything to do with their emotional health and wellbeing, but they do. We’ve known for a long time that inequality causes a wide range of health and social problems, including everything from reduced life expectancy and higher infant mortality to poor educational attainment, lower social mobility and increased levels of violence. Differences in these areas between more and less equal societies are large, and everyone is affected by them.

In our 2009 book The Spirit Level, we hypothesised that this happens because inequality increases the grip of class and social status on us, making social comparisons more insidious and increasing the social and psychological distances between people.

In our new book, The Inner Level, we bring together a robust body of evidence that shows we were on the right track: inequality eats into the heart of our immediate, personal world, and the vast majority of the population are affected by the ways in which inequality becomes the enemy between us. What gets between us and other people are all the things that make us feel ill at ease with one another, worried about how others see us, and shy and awkward in company—in short, all our social anxieties.

For some people, these anxieties become so severe that social contact becomes an ordeal and they withdraw from social life. Others continue to participate in social life but are beset by the constant worry that they have no small talk or come across as boring, stupid or unattractive. Sadly, we all tend to feel that these anxieties are our own personal psychological weaknesses and that we need to hide them from others or seek therapy or treatment to try to overcome them by ourselves.

But a recent Mental Health Foundation Survey found that 74 percent of adults in the UK were so stressed at times in the past year that they felt overwhelmed and unable to cope. One-third had suicidal thoughts and 16 percent had self-harmed sometime in their lives. The figures were much higher for young people. In the USA, mortality rates are rising, particularly for white middle-aged men and women, due to ‘despair’, meaning deaths due to drug and alcohol addictions, suicide, and vehicle accidents.  An epidemic of distress seems to be gripping some of the richest nations in the world.

Socioeconomic inequality matters because it strengthens the belief that some people are worth much more than others. Those at the top seem hugely important and those at the bottom are seen as almost worthless. In more unequal societies we come to judge each other more by status and worry more about how others judge us. Research on 28 European countries shows that inequality increases status anxiety in all income groups, from the poorest ten percent to the richest tenth. The poor are affected most but even the richest ten percent of the population are more worried about status in unequal societies.

Another study of how people experience low social status in both rich and poor countries found that, despite huge differences in their material living standards, across the world people living in relative poverty had a strong sense of shame and self-loathing and felt that they were failures: being at the bottom of the social ladder feels the same whether you live in the UK, Norway, Uganda or Pakistan. Therefore, simply raising material living standards is not enough to produce genuine wellbeing or quality of life in the face of inequality.

Although it appears that the vast majority of the population are affected by inequality, we respond in different ways to the worries it creates about how others see and judge us. As we show in The Inner Level, one way is to feel burdened and oppressed by lack of confidence, feelings of inferiority and low self-esteem, and that leads to high levels of depression and anxiety in more unequal societies.

A second is to try to flaunt your own worth and achievements, to ‘self enhance’ and become narcissistic.Psychotic symptoms such as delusions of grandeur are more common in more unequal countries, as is schizophrenia. As the graph below shows, narcissism increases as income inequality rises, as measured by ‘Narcissistic Personality Inventory’ (NPI) scores from successive samples of the US population. 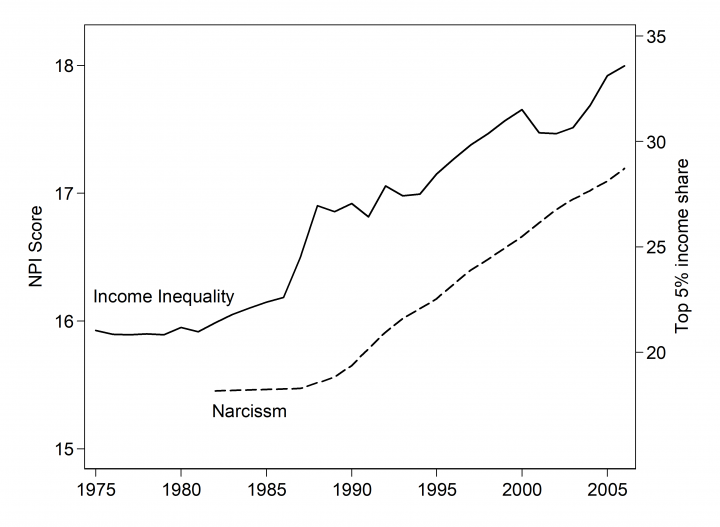 A third response is to find other ways to overcome what psychologists call the ‘social evaluative threat’ through drugs, alcohol or gambling, through comfort eating, or through status consumption and conspicuous consumerism. Those who live in more unequal places are more likely to spend money on expensive cars and shop for status goods; and they are more likely to have high levels of personal debt because they try to show that they are not ‘second-class people’ by owning ‘first-class things.’

In The Inner Level, the evidence we show of the impact of inequality on mental wellbeing is only part of the new picture. We also discuss two of the key myths that some commentators use to justify the perpetuation and tolerance of inequality.

First, by examining our evolutionary past and our history as egalitarian, cooperative, sharing hunter-gatherers, we dispel the false idea that humans are, in their very nature, competitive, aggressive and individualistic. Inequality is not inevitable and we humans have all the psychological and social aptitudes to live differently.

Second, we also tackle the idea that current levels of inequality reflect a justifiable ‘meritocracy’ where those of natural ability move up and the incapable languish at the bottom. In fact the reverse is true: inequalities of outcome limit equality of opportunity; differences in achievement and attainment are driven by inequality, rather than being a consequence of it.

Finally, we argue that inequality is a major roadblock to creating sustainable economies that serve to optimise the health and wellbeing of both people and planet.  Because consumerism is about self-enhancement and status competition, it is intensified by inequality. And as inequality leads to a societal breakdown in trust, solidarity and social cohesion, it reduces people’s willingness to act for the common good. This is shown in everything from the tendency for more unequal societies to do less recycling to surveys which show that business leaders in more unequal societies are less supportive of international environmental protection agreements.  By acting as an enemy between us, inequality prevents us from acting together to create the world that we want.

So what can we do? The first step is to recognise the problem and spread the word.  Empowering people to see the roots of their distress and unease not in their personal weaknesses but in the divisiveness of inequality and its emphasis on superiority and inferiority is a necessary step in releasing our collective capacity to fight for change.

The UK charity we founded, The Equality Trust, has resources for activists and a network of local groups. In the USA, check out inequality.org. Worldwide, the Fight Inequality Alliance works with more than 100 partners to work for a more equal world. And look out for the new global Wellbeing Economy Alliance this autumn.

Our own focus for change is to work for the increase of all kinds of economic democracy—everything from more cooperatives and employee-owned companies to stronger trade unions, more workers on company boards and the publication of pay-ratios. We believe that extending democratic rights to workers embeds greater equality more firmly into any culture.

Of course, we would also like to see more progressive taxation and action on tax evasion and tax havens. We’d like to see more citizens paid a Living Wage, and action taken on universal provision of high-quality lifelong education, universal health and social services. There are lots of ways to tackle inequality at the international, national and local levels, so we all need to work in ways that suit our capabilities and values.

Inequality creates the social and political divisions that isolate us from each other, so it’s time for us all to reach out, connect, communicate and act collectively. We really are all in this together.

Kate Pickett and Richard Wilkinson are professors of epidemiology, co-founders of The Equality Trust, and authors of The Inner Level: How More Equal Societies Reduce Stress, Restore Sanity and Improve Everyone’s Wellbeing, which is published by Allen Lane.