Once upon a time there was an African country, Tanzania, praised by the whole West as “peaceful, tolerant, hospitable, etc., etc., etc.”

Thanks to its founding ‘father’ J. K. Nyerere, a primary school teacher, Tanzania gained independence from colonial rule in 1961 without spilling a drop of blood, unlike all the neighbouring countries including Kenya with its ‘Mau-Mau’ (one of the first historical examples of terrorism against civilians).

Nyerere’s Tanzania was as much praised in words, and supported by NGOs (the real ones) around the world, as it was boycotted by the elite of world finance: for them, Nyerere was a dangerous enemy, much worse than Samora Machel (Mozambique), who died in 1986 after a plane crash due to probable sabotage, or Thomas Sankara (Burkina Faso), murdered in 1987 by his closer collaborator, hitman and then puppet of the West. In fact, Nyerere was the most respected opponent of South African apartheid, the most authoritative African leader among the Non-Aligned Countries, and the most charismatic promoter of the OAU (Organization for African Unity). However, Nyerere’s ‘traditional socialism’ was reluctant to die, and so in the 1980s the wave of neoliberalism (not being satisfied with neocolonialist exploitation) also targeted Tanzania. Here are some salient facts:

1981: The USA of Reagan veto the appointment of Tanzanian Salim A. Salim as UN Secretary General;

1983: At the World Summit in Cancun, Reagan mocks Nyerere;

1984: Nyerere announces that he will not re-apply to the Presidency of the United Republic of Tanzania;

1984: The Tanzanian Prime Minister Edward M. Sokoine, Nyerere’s chosen successor, dies in a very suspicious car accident caused by an infiltrator of Nelson Mandela’s ANC (African National Congress). Nyerere is forced to block any investigation into that suspected international conspiracy to leave no doubt about his support for Mandela in those critical months when South Africa would choose between open civil war and nonviolent resistance to apartheid.

From 1985 to 2015, three presidents followed one another, willingly or unwillingly moving Tanzania into the clutches of the Market god: the Tanzanian shilling is permanently hooked to the U.S. dollar under the strict control of the IMF (International Monetary Fund) with its infamous structural adjustment: dismantling the welfare state and privatising national strategic resources.

At this point, a paradox appears in the neo-colonialist robbery: with the new course, certified by the IMF, the Tanzanian economy grows by an average 7% every year, compared to the skimpy 2.5% of the USA, and yet the exchange rate between the shilling and the U.S. dollar, instead of appreciating, falls from 600 Tshs for 1 US$ in 1998 to almost 2400 at the end of 2018.  That is a devaluation close to 400%! 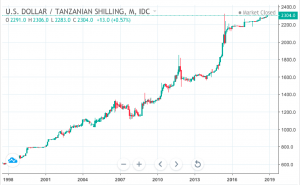 Well, let’s do our “home economics”, knowing that we are over-simplifying but not cheating. So, if in 1998 it cost 600 Tanzanian shillings (Tshs) to buy 1 US dollar, we could say that the Gross Domestic Product (GDP1 ) of the USA was 600 times greater than Tanzanian GDP… but it doesn’t matter, it could be 600,000 times greater!  We are not interested in the absolute value, but in the relative value.  Whatever the exchange rate was, after 20 years of Tanzania’s GDP growing more than that of the USA -certified by the IMF- that ratio should fall, not grow.

The attached table shows the two hypotheses (600 or 600,000 Tshs for 1 US$) with their respective annual increases. Whatever the absolute value, the fact remains that Tanzanian GDP has almost quadrupled while that of the USA has grown only by 64%; the fact remains that, if in 1998 one dollar was worth 600 Tshs, today 254 Tshs should be enough to buy one. 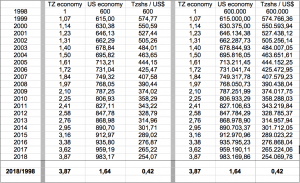 Question: why does the US$ cost almost ten times as much as what it theoretically should do?

“Because of inflation!” the econometricians reply in chorus. “The GDP of Tanzania did grow by 7%, but inflation grew by 20% or more, so the exchange rate worsened every year!”… And with such an argument they try to silence the ignorant.

But we read in the Treccani Encyclopedia: inflation = progressive decrease in the purchasing power (i.e. in the value) of money.

So let’s rephrase the question:
– why did the value of the Tanzanian currency decrease instead of grow?
– because it registered a progressive decrease in its value!

This is a tautology in perfect econometric style: econometricians in fact pretend to apply mathematics to economics, discarding any social, psychological or – horror! – emotional component, but at the same time they speak shamelessly about the ‘mood’ of the markets, ‘panic’ on the stock exchange, self-fulfilling ‘prophecies’, etc., etc.

– Wait a moment… what is the point?
– The point is that Inflation is the greatest scam in human history!  An obvious scam, but nobody investigates obvious matters…

…And thus econometrics becomes more and more alien, indeed hostile, to the real economy. Econometrics has overthrown classical economics which, not by chance, was called Political Economics.

1 GDP is an evil measure, but here we limit ourselves to using the IMF’s arguments.