As they say, a visit to China is a cultural experience and our day at Ci Qi Kou did not disappoint.

The day after the Global Video Media Forum, we had a chance to explore the streets and narrow alleyways of ancient Chongqing and experience the sights, smells, and sounds of traditional Chinese culture.

Dating back to the Qin Dynasty, many subsequent dynasties have set up administrative institutions here. Thanks to its strategic location right beside the Yangtze, known as the “Golden River”, Chongqing symbolizes Yangtze River civilizations and is the cradle of the Bayu Culture.

Chongqing was, for a while, the capital of the Republic of China during World War II, after the then capital of China, Nanjing, was under Japanese occupation. After the Japanese surrendered in 1945, the capital was relocated back to Nanjing. A shrine to the forgotten soldier can be found tucked in a corner of the Ci Qi Kou village.

With its dense population and modern city skyline against haze-filled skies, Chongqing is not known as a tourist destination and is usually a stepping stone for tourists rushing to its port where luxury boats offer cruises down the Yangtze River. But some pockets of history still exist amidst the urban landscape.

One of these is Ci Qi Kou, the Old Town area where porcelain was made and shipped during the Ming and Qing Dynasties. Over twenty old kiln sites have been discovered there to date. Because porcelain was an important industry, its name was changed from Long Yin to Ci Qi Kou which is translated as Porcelain Village. As the village was an important supply post for shipping on the river, many shops line the twelve lanes which are paved with large flagstones that form the main routes. Today, it is a popular place to experience Chongqing as it was during a bygone era.

The old houses still stand and the city’s dockside scenes have changed little over the years, built during the time when many masterpieces of Chinese architecture were created. Made of bamboo and timber, blue bricks and pillars set off the white walls that contrast with vermilion doors and lattice windows. Lanterns hang on the gates, giving them that authentic feel. The waters of the Jia Ling River flow in front of the village and have been its lifeblood for as long as anyone can remember.

Food, Food, and More Food. The village was bustling and alive with many visitors, both locals and foreigners alike, enjoying the many wares and attractions offered by the shops that lined the streets. All kinds of food were being prepared right before your very eyes. Hawkers in colorful costumes stood in front of the shops and restaurants in a bid to attract your attention. We walked past stall upon stall of food– all kinds of barbeque, pancakes, dumplings, hotpot, preserves, fruits, savory snacks, pastries, nuts, seeds and other exotic delicacies that made you wonder, What on earth are they? Many tea shops and bars of course! Although the city is no longer a part of the Sichuan province, it still shares its history and culture as can be seen in its hot and spicy cuisine as many of the dishes are made with the famous Sichuan peppers. 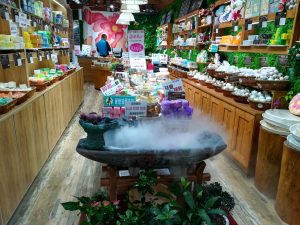 Traditional arts and crafts a-plenty. As you explore the side streets of the main street, local artists can be seen working at their craft. Shu embroidery, Chinese silk painting and calligraphy, bonsai, jewelry and all the produce of Chinese artisans can be found to take home as souvenirs and keepsakes.

In the midst of the hustle and bustle of all the shops atop a long stairway stands the Bao Lun Temple. The Jianwen Emperor of China’s Ming Dynasty lived the rest of his life here after he was ousted from Beijing and went into exile. Accordingly, the four large Chinese characters Da Xiong Bao Dian hanging on this temple were written by Zhao Puchu, a famous Chinese calligrapher who was the president of China’s Buddhist Society. The main building at the temple was built during the Ming Dynasty 600 years ago and was constructed without a single nail. Regarded as a miracle in China’s architectural history, it’s a place where Buddhists still go to, offering prayers and homage to the Buddha.  It was quiet and serene, a welcome respite, a chance to imbibe the spiritual atmosphere of Buddhist China as we looked upon the statues found within the pavilions housed in the temple complex. 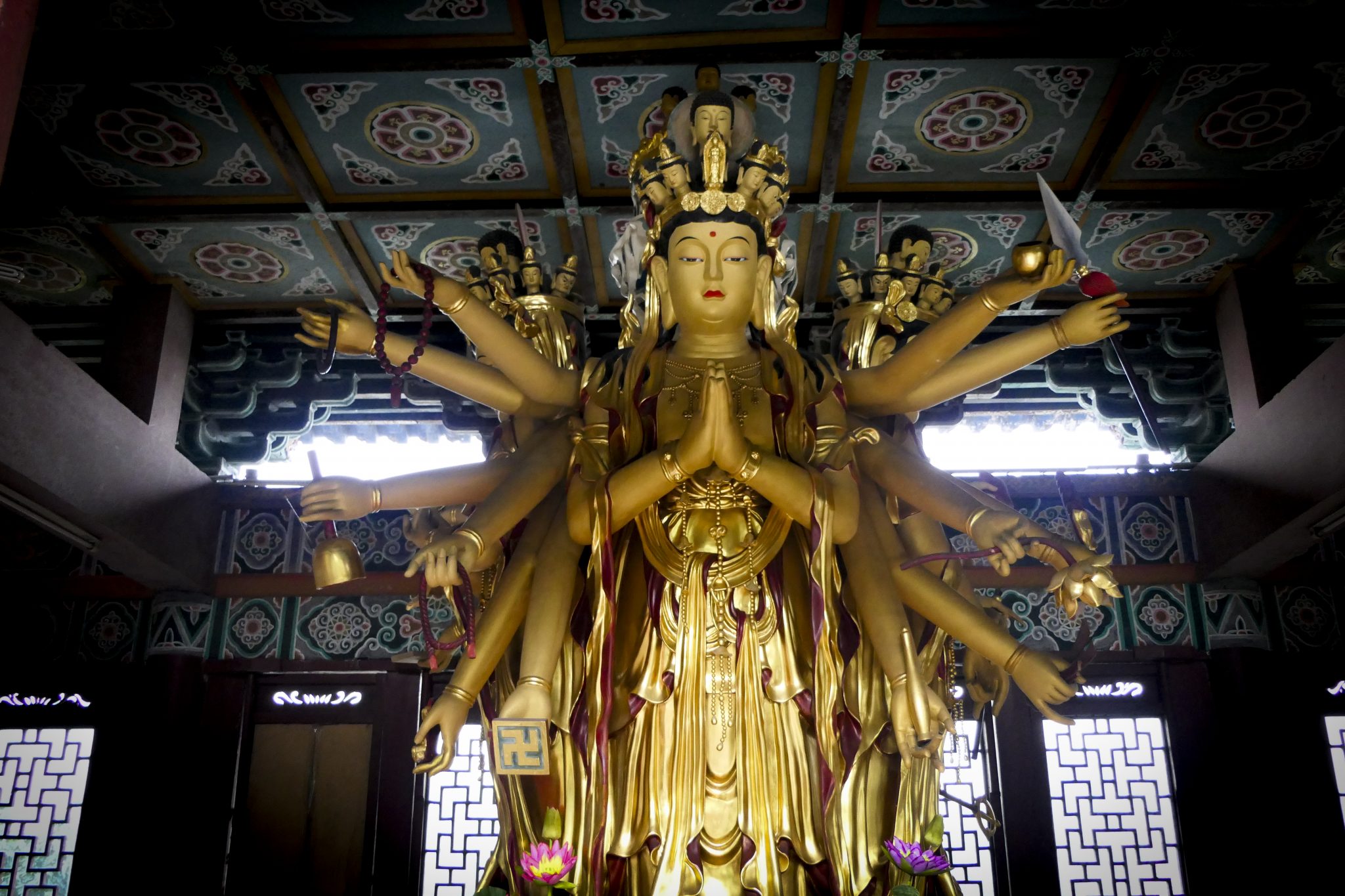 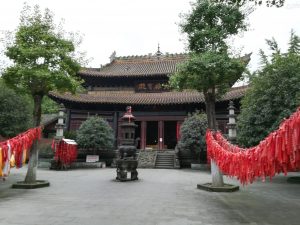 The Tea Pavilion by the Temple.

After visiting the temples, a light rain drizzled down. We took tea at a charming Tea Pavilion which afforded a topside view of the surrounding environs. The tea lady demonstrated how to prepare and enjoy green tea the traditional way. As we sipped our tea, two young Korean visitors came in and easily struck a conversation with us. They were fluent in English, Spanish and French, and were happy to meet people from Chile and Europe to speak with. The two brothers, one a graduate of political science and the other studying philosophy in Hong Kong, were touring the municipalities of China with a view of understanding China on a firsthand level. A spirited exchange ensued, with the Koreans sharing their perspectives of current events on the Korean Peninsula, expressing hope that the relationship between North and South do progress well so that peace can finally prevail in the future.