Since 9/11, the regions where the U.S. military has been most active—countries in Africa, the Middle East, and South Asia—have seen a five-fold increase in violent attacks –

In the 17 years since the events of Sept. 11 2001, after which the United States declared a “global war on terror,” there has not been a terrorist attack of similar size or magnitude on American soil.

However, according to findings in a new congressionally mandated report by the United States Institute of Peace—authored by members of a federal task force focused on extremism—nations around the world have suffered a five-fold increase in terrorist attacks following the post-9/11 policies unleashed by the U.S. and its allies.

The focus of the report—titled Beyond the Homeland: Protecting America from Extremism in Fragile States—maintains a very U.S.-centric worldview. And while it does little or nothing to critically challenge the widely criticized policies pursued by the Bush, Obama, or Trump presidencies, its tabulation of the dramatic rise in destablized states and growing terrorist violence throughout the regions where the U.S. military has been most active since 2001—namely, the Middle East and North Africa, South Asia, and Sub-Saharan Africa—is nonetheless revealing. 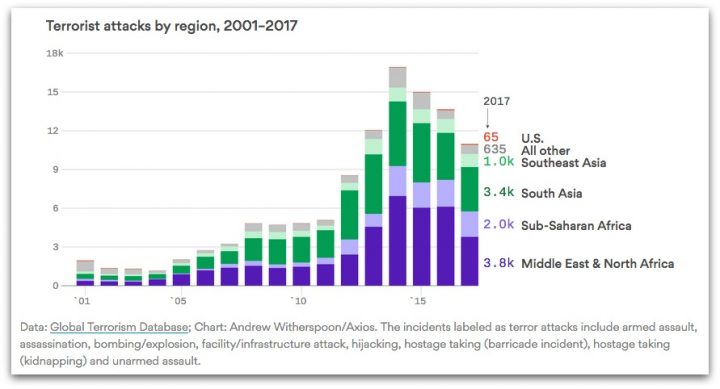 That the so-called “global war on terror” is, in fact, creating more terrorists than it eliminates is not news. Even the CIA has admitted that.

But 17 years after that fateful and horrifying day—and with the people of Syria, Iraq, Afghanistan, Libya, Somalia, Pakistan, Ethiopia, Chad, Yemen, and many other countries still being forced to suffer the consequences of a nearly borderless, limitless war—it remains important to once more document the futility of violence as being a solution to… violence.