I met David McReynolds when I was still a searching young adult, unsure of how to square my radical upbringing and inherited principles with being a grown up who had bills to pay and stars to catch in New York City. I started coming to War Resisters League meetings and listening as decades-old debates raged between socialists and anarchists, strategic and moral pacifists, young and old radicals, and those who believed in confronting war with a pointed, learned essay and those who believed it required a mass mobilization or a general strike.

David — who passed away last month at the age of 88 — was already an elder within the organization when I joined nearly 20 years ago. He wasn’t always on one side or the other, but he was always trying to impart hard-won wisdom from a life of pacifist strategizing, struggling and experimentation.

By now, David’s accomplishments and contributions have been enumerated and lauded in countless publications from the New York Times to Tikkun, so I won’t reprise them all here. If you didn’t know David, the best way to understand who he was and what his life meant to so many is to listen to Democracy Now’s extended interview with his friend and colleague Ed Hedemann and Jeremy Scahill, activist and journalist. I have found myself hungry for his voice in the weeks since his death. Luckily, YouTube has loads of interviews with David, including a whip-sharp appearance on Politically Incorrect with Bill Maher in August 2000, where he held his own — refusing to be caricatured as a political quack. Invited to sit alongside Shari Belafonte and two other actors, David stayed focused on the issues, got in his talking points and is not cowed by celebrity. He won the crowd’s respect and affection.

And while he bemoaned that he wasn’t going to jail all the time for his beliefs, he took a bust more than most and was consistent over more than half a century in his opposition to war and militarism. As his friend and longtime colleague Ed Hedemann told me, “I believe one of his first arrests (if not the first) was April 17, 1959, in City Hall Park for refusing to take shelter during the annual nuclear war air raid drill; and his last arrest — 56 years later — on April 28, 2015, was in front of the U.S. Mission, demanding the elimination of all nuclear weapons.” Ed wrote back a few hours later to revise the record, “Actually, his first arrest appears to be in 1954 when he refused induction.” That is 61 years of pacifist, creative, brave witness.

I watched and listened and learned. The work of building peace with justice is a lifelong undertaking. It can’t all happen today. How do you sustain a sense of urgency without going crazy? How do you care for yourself and care for the world? How do you — as his friend and mentor A.J. Muste posited — remain steadfast in your principles, remain unchanged in a changing world?

Here are some lessons I am trying to learn from David McReynolds:

David loved scents. He had hundreds of vials of perfume and essential oils and always smelled good. He took and shared beautiful photographs. He learned about E.E. Cummings and William Carlos Williams from the great dancer Alvin Ailey when they were both young, and Ailey imparted a lifelong love of poetry to David. He was a member of the New York Bromeliad Society and traveled all over to continue to learn about these incredible plants. I had to look up what that meant (it’s a plant that thrives without soil). He paused over and appreciated beauty.

David mailed birthday cards to his friends. Mostly up-close photos of flowers with a penned or typed line of appreciation. He cultivated friendship and maintained them even amid bitter political and philosophical disagreements. He had an open door policy at his tiny and incredibly cluttered apartment, which served as a late night salon for a wide circle of of friends. Every year, he called together his community to “the Night of the Candles.” In the dark, he and his friends named and remembered those who had died in the past year, lighting candles and speaking their names. It is a tradition he kept for many years. In addition to his many human friends, David also cared for and loved cat companions. David was a good friend.

You need to eat

My husband, Patrick Sheehan-Gaumer, knew David through the War Resisters League as a kid. The two of them would sneak out for forbidden hamburgers at McDonald’s, eschewing the veggie movement fare. David made a hummus redolent with garlic. It was almost more garlic than beans. His recipe, captured for a War Resisters League desk calendar, calls for a healthy dose of MSG. He brought it to every gathering. And now we will too, in celebration of his distinct palate.

You need to believe

David was an atheist. He did not subscribe to any religion. But he carried a deep respect for many and was curious about faith traditions. He believed in ritual and created meaning, making gatherings like his Night of Candles. He believed in socialism, saying he didn’t just want to be anti-imperialist or anti-racist, but pro-solution. He believed in people, in beauty, in tomorrow. 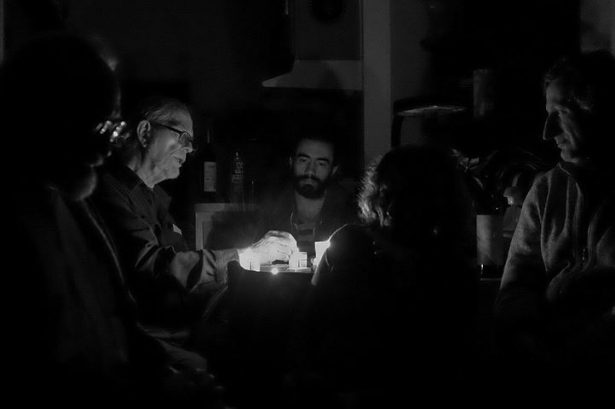 David McReynolds hosting one of his Night of the Candles events. (WNV / Matthew Daloisio)

In his last Night of Candles invitation, in 2017, David wrote: “I am very aware that at 88 I am pushing the odds of whether I will be here next year. The event is meant to pay homage to our personal pasts, to the people (or cats, dogs, birds) that, for good or bad, shaped us. We rush to the future, but the past is still alive in us.”

This year, there will be a new candle flickering in the darkness. David McReynolds, thank you for all you are teaching me.