When one sees Chicago in headlines, violent images — particularly those involving African American and Latino youth — often come to mind. The city’s segregated neighborhoods, like Austin, Englewood, North Lawndale, Garfield Park and Little Village, are predominantly black and brown communities that have a reputation as tough and violent. The common narrative of these neighborhoods is that they are where the lives of poor people of color are lost to the streets, jails or gun violence.

A small program called Peace Exchange is using the teachings of nonviolence to help change the narrative of these communities by working with youth leaders who are interested in peaceful change. Founded in 2013 by youth leaders, the program’s vision was to bring youth out of their neighborhoods to experience transformational international travel to learn about nonviolent social movements abroad.

Peace Exchange works primarily with young African American and Latino youth from the west and south sides of Chicago who are exposed to high levels of injustice, from closed schools to police brutality to gun violence. These young people come from some of Chicago’s toughest neighborhoods and know first-hand the effects of inner city violence. The program has developed a model for training and supporting young Chicagoans to become role models and mentors for their own communities.

“The purpose is to expand the world view of inner city youth and get them out of their American bubble,” said Jess Work, who serves as international program manager for Peace Exchange. “Our youth travel internationally to continue their peace studies with neighborhood organizers, student leaders and peace activists. Our choice of destinations, particularly to disadvantaged communities, provides a remarkable range of experiences and broadens our travelers’ world views.”

Each year, Peace Exchange works with partner sponsor organizations to support a cohort of six youth from ages 17-22 that it calls Peace Builders. Once the youthare nominated and selected, they go through an intensive 12–month, three-phase program.

In the first phase, Peace Builders undertake 80 hours of training from experts and professionals working to address violence in various forms. Training providers include institutions like the Holocaust Museum and Education Center and the Anti-Defamation League. The trainings are on a variety of topics, from domestic violence and genocide to conflict resolution and peace circles. All training are anchored in nonviolence, mindfulness and compassion to better equip the Peace Builders in bringing their leadership back into their own communities. 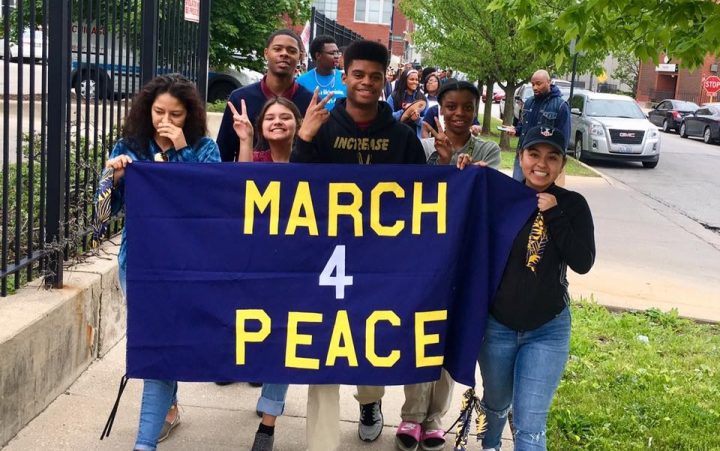 The Peace Builders joined the DRW Westside Peace March in the Chicago neighborhood of North Lawndale in May 2017. (Facebook/Peace Exchange)

During the second phase, the Peace Builders travel for 2-3 weeks to an international destination to learn about nonviolent social movements and youth strategies for social change. Past groups have traveled to Myanmar, Thailand, Nicaragua, South Africa and, most recently, India. In each country, partnerships are developed with local organizations, which are youth-led or work with young people.

The class of 2013-14 traveled to Thailand and Myanmar, where they spent a week at Thai Plum Village, a meditation community founded by Thich Naht Hanh. Peace Builders learned the art of living in mindfulness and practiced strategies to help improve interpersonal relationships. In Myanmar, they learned from local youth leaders from the Karen State and their struggle for autonomy and survival, as well as their cultural and spiritual ways of staying resilient and peaceful in the face of war and violence.

In 2015, the Peace Builders traveled to Nicaragua to learn from the young people at Los Quinchos, a center for street youth who have survived poverty and violence. And the class of 2016 traveled to South Africa, where they learned from the youth of Imagine Scholars about how to create empathy and prevent abuse. Peace Builders visited Soweto and met with local activists who worked to end apartheid. They also went to Nelson Mandela’s home and learned about how young people and students had led a nonviolent movement that helped bring about the changes there.

Peace Exchange’s creative approach allows it to help build local and international youth peace movements. The purpose of these trips is to expose participants to peace activists who are working for peace and social justice. All of their experiences are documented by youth documentary filmmakers from Free Spirit Media. (The films can be seen here.)

For the third phase, Peace Builders are challenged to come back to Chicago and share what they have learned about nonviolent social change from their training and experiences abroad with young people in their neighborhoods. In the past five years, they have reached over 6,000 youth and allies in their schools and communities. Peace Builders use the power of their personal stories — melded with the lessons they learned from their travels about peacemaking processes and nonviolence — to spread their message to younger youth in their communities. Their films and stories are also shared with audiences at the annual Peace on Earth Film Festival.

In addition to the three-phase program, Peace Exchange provides a four session modular program to partner schools called Speaking Peace that offers a deeper dive into nonviolence. The Peace Exchange does this thanks to the help of the Communities in Schools of Chicago, a partner organization that makes referrals from local public and private schools. Speaking Peace is driven by requests from elementary schools that seek peace education.

The program teaches tolerance, responsible decision-making and nonviolence through discussions, storytelling, role-playing, games and documentary films. Each of the four sessions, which are taught by Peace Builder alumni, touches on a number of social and emotional learning skills with an emphasis on fostering self-awareness, developing empathy, nurturing positive relationships and acting responsibly. Peace Exchange’s goal is that 3,000 students in the Chicago area, primarily in the fourth through eighth grades at schools, will take part in Speaking Peace each school year.

Those who have studied and participated in nonviolent social movements know two key lessons: Peacemakers are not born, they are made; and before any social change can occur, individuals must first change. It is on these premises that Peace Exchange exists. Alumni have been transformed by their experiences in the program.

Take Anthony Green, a Peace Builder from the North Lawndale community, who works part time at a local chain store. North Lawndale has an unemployment rate almost triple the average in Chicago. At age 22, he is the oldest brother to 12 siblings and has had violence personally affect him. He was nominated by UCAN, a sponsor organization in Chicago that works with high risk youth.

“The trip to India has really empowered me and motivated me to be a driving force in helping bring peace not only in my community, but others as well,” Green said. “Peace Exchange has shown me that there are various ways to bring peace into the community and that by understanding each others’ needs we will be much closer to obtaining it for every community.” 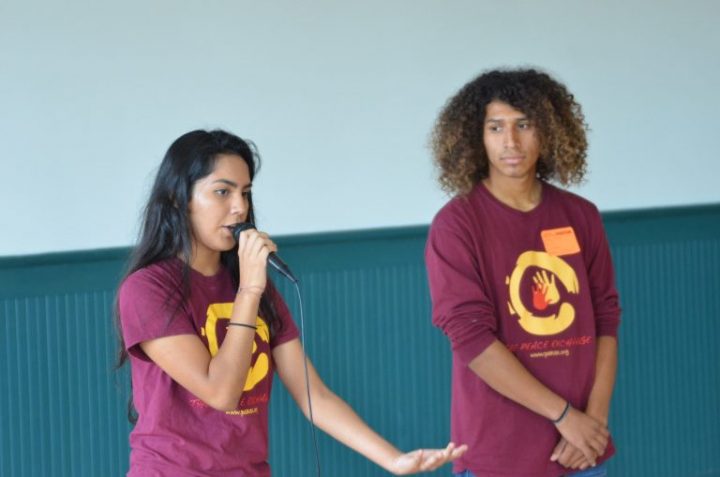 Stefany Rendon, a 20-year-old from Cicero, was another participant in the program. She was nominated by her sponsor organization, the JosephineAcademy of the Sacred Heart High School. She remembers growing up and becoming immune to violence. When she was a child, gunshots went through her living room windows and over her head. In 2015 she traveled to Nicaragua and now leads with a message of peace wherever she goes.

“Peace Exchange has helped me establish relationships that enable me to lead, educate, mentor and nurture peace in my own communities,” Rendon said. “Being a Peace Builder here in Chicago means that I have to be an example for the youth of my community, because I know when I was young I always looked for someone that I could look up to. What has surprised me the most is how much Peace Exchange has impacted my life and changed it. I have seen that peace is possible in various communities throughout the world.”

Peace Exchange believes in the power of youth and of nonviolence. There rootcauses of youth violence are many. If violence is to be stopped, allies and mentors must ask themselves some tough questions: How am I creating opportunities for poor young people of color impacted by violence? How am I encouraging their interest in peacemaking? How am I supporting youth voices for change in this society and around the world?

With nonviolence, one must recognize that the ultimate resource is within oneself and others. Every young person has unlimited potential and all they need is to be provided with meaningful opportunities for positive change to occur. In doing this work, it has become clear that young people are hungry for this kind of peace knowledge and skills. The key to changing society is changing oneself, and Peace Exchange is helping to make that happen, one young person at a time.