Excerpt from the talk by Ernesto H de Casas. Participant from the beginning of this movement.

It was a sunny day, good temperature, surrounded by the imposing mountain. That rally was actually a consequence of Silo’s decision to make his thoughts known to the public. Because he considered that the time had come to do so. It was a great event. We had found this mountainous landscape and Silo had been there since January in his retreat which he was going to interrupt to give this address. It was his unwavering readiness to transmit his message. And, this decision, like others that he took, is something to highlight, since it has constituted his significant way of doing all of his work over time. Thomas Carlyle, Scottish thinker, says that “History is nothing more than the biography of great men” and this is our case, because our short history has to do not only with his biography but with the decisions of this great man. This rally was carried out there in part, because of the scenery of the mountainous area, but more than anything because the authorities at the time denied their authorisation to do it in the city. But nothing prevented this address: The  Healing of Suffering.

And so the event developed in three parts, first, the arrival for which there were orange flags for reference and a previous speaker, then Silo’s speech after a period of an impressive silence and the end with the delivery of the caduceus to the attendees, Indicator of their desire to give to others. Afterwards, there was a press conference at the Uspallata Hotel. Later all the participants met at the home of a friend where he presented us with a document in which he stressed the importance of liberation. From this moment onwards a decidedly public period began. We had finished the trials and the scaffolding, to move on to the period that would take us, not only to neighbouring countries of America, but also to Europe, the USA, and Asia, that is to say, to the world.

It was there that he gave us our framework: nonviolence and the overcoming of suffering, with which we could already undertake many other themes, but always within that framework of primary reference.

Now, as a participant in the early days, I would like to emphasise that Silo had begun his teachings much earlier and would have prepared for it from his early youth. Performing all kinds of research in very different fields, in addition to completing conventional studies. Those previous decades were dedicated to his studies, works, gymnastics, reflections, trips and experiences, as he himself would define them, important and intense.

It should also be noted that we felt him as a great friend, from the city of Mendoza, always affable and willing, expressing himself colloquially in an excellent way; in a corner, a coffee, a casual meeting, and he would always talk about substantial issues, with positive and encouraging observations. We once asked him if we would be critical, he replied that it was not our style, because what you criticise, it grows; on the other hand, if you apply yourself to the constructive, to the favourable, it is that, which will end up predominating; and that is what interests us.

There are innumerable anecdotes and phrases that we remember from those casual encounters. One day, there was a slight setback that arose in a cafeteria and he told us “that is a contradiction, and the contradiction leads to immobility, so let’s move on …” A friend wrote a little document of the recommendations given by him talking in a corner long ago. He told us: We must continue observing our behaviour in the light of The Principles, and do much interchange in the weekly meetings. That said, and as if turning the page, he began saying: “There are three fundamental things to keep in mind: First, self-awareness; Second, The Principles as a guide to behaviour; Third, always decides the transcendental.” (1)

Or that other friend who tells us the occasion in which he talked to Silo about his permanence in these activities and he said: “It is because you have chosen them, when one chooses, one remains, but it must also be noted that one also stop choosing other things… (2)”

And when that day, on his way home, talking about some activity, he commented: “Sure, of course, doing things, that’s good, doing things-with-others, always with others …” And when he makes a comment, emphasising that “conversations with us, with any of us, must be something extraordinary, they cannot be something routinary … ”

A friend tells us that at the end of a Seasonal Meeting, sitting on a chair and looking around, he said: “It is impossible not to interpret, it is impossible not to interpret … free interpretation is important” Also in a similar situation, friends remember that at the end of another meeting, Silo greeted each of the attendees, maybe fifty of them, wishing them the best, to do what they want to do, that surely it will go well. And so they proceeded…

Undoubtedly much more could be said about that fluid and genuine colloquial style, which somehow turned out to be aphorisms that we can keep in mind.

I would like to mention now that in my opinion this wise man, towards the beginning of the 60s, adopted his fundamental option of beginning to offer his contribution to others, defining his purpose; he gave himself an intention in life and developed it over several decades. It is, I believe, a little about the approach of existential analytics, where they say that man is thrown into the world, there he is, as a helpless being, and must complete himself, make himself, then launches his project and in doing so, he meets others and (as Sartre notes), there he discovers some agreement in some and others in opposition. That is what I think Silo has done: he launched his project to help these suffering and concrete human beings, providing them with numerous resources for their development. Avoiding and surpassing adversities and taking advantage of favourable situations, always with people and for people, friends who participate and make the proposal their own.

Anyway, this is my testimony, precisely for those early days, when I was a young teenager who met another young man in his 24th year, who was beginning his journey of giving the world his message “of peace, love and explaining the possibilities of awakening …” (3)

In total, he leave us a legacy of a set of valuable references that we can summarise as: His doctrine, Siloism and New Humanism, The Message, The Study Centres, Meeting Centres (small Halls), Parks of Study and Reflection, and his School … All of this is a manifestation without reservations and leaves us a clear model to continue and pass on, which answers the fundamental question: What to do in a complicated world, with violence, disillusionment, false solutions … What to do? Well… Humanise the earth!

So Silo is the spiritual guide who is recognised and emerges at a crucial moment. Spiritual guides tend to be Universal. They arise when there is a change of civilisation, as it is in our epoch. They work for the future. Their theme is to give direction to everything that helps the human being.

But if we ask ourselves, who is Silo? That man who shows us the spiritual with as much relevance as reality itself … Here we turn to a presentation by Salvatore Pulleda.

Speaking of his kindness and wisdom, he said: “what else to say. Only this. Lately, and in spite of our long familiarity, the question has arisen with increasing force: who truly is, Silo? So, to find an answer, I followed the advice he gave me when I was looking for answers to important questions about my life. I have thrown the question into the depths of my consciousness and I have waited for the answer. And it was this: Silo is a guide, an initiated, someone who has a key to open the door of the spiritual world. (5) 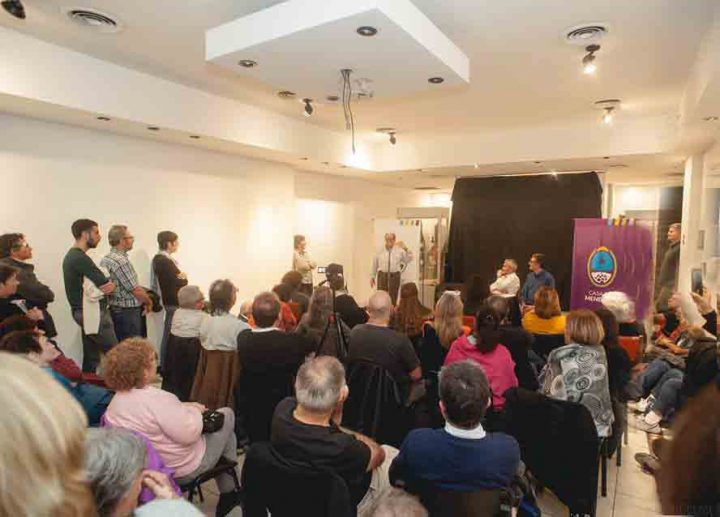 4) In booklet In Open Sky. And in the speech of the Summit of Noble Prizes for Peace, Berlin, XI / 2009, and Meeting with Messengers in 2010

5) Speech on the 10th anniversary of the Humanist International and formation of the Latin American Humanist Regional Santiago de Chile, January 7, 1999 Salvatore Pulleda

(*) NT a native from the Province of Mendoza, Argentina