In the European Humanist Forum that took place in Madrid on 11, 12 and 13 May, one of the working areas was promoted by the Association of Humanist Women for Nonviolence. Participating as speakers were: Annabella Coiro, expert in communication and education for nonviolence in Italy; Lydienne Nkaleu, president of the Committee for Assistance to Women in Need in Cameroon; Silvia Beatriz González González, promoter of peace and nonviolence in Spain; Nicole Ndongala, D.R. Congo/Spain, President of the Karibu Association, Spain; Jenny Infante Labrin, Gender Equality Promotion Technician from Spain; Sudha Reddy, Director of the Ecological Foundation for Sustainable Alternatives from India; and Carmen Serra Majada, Co-founder of the Valladolid Hepatitis C Platform.

An experiential workshop was held and what was discussed and experienced between the promoters and the audience was synthesized.

In this interview, Encarna Escribano, president of the Association of Humanist Women for Nonviolence and moderator of the thematic area, tells us about the association and about the conclusions and projects that emerged in the Humanist Forum.

What is the motivation behind this initiative?
Life is threatened and we feel the need to step forward and protect life. A global and true commitment to the protection of life is essential at the present time.

How can life be protected?
We do workshops that allow the connection with the femininity, which is the connection with life. Having degraded femininity, patriarchy has led to a growing disconnect with life and as a consequence, everything that is happening today is being observed: wars, famines, the appropriation of food, water scarcity, the destruction of nature…

In contact with other groups and networking…
Yes, we want to contact more and more associations and we have the project of creating a network of networks and making all these non-violent associations that are already in operation visible. For example, there are people who are doing things in isolation in some cases, and the idea is to generate a network where we can interconnect to make all these non-violent actions visible and to support actions that could have an important projection or impact. For example, the women of Bethlehem, the three religions – Muslim, Christian and Jewish – come together and make a journey for peace every year. It is an exemplary action that could be more widely disseminated.

From the workshops to the Humanist Forum promoting and organizing.
Yes, we have promoted the presence of women as a thematic area in the Humanist Forum and its openness to other women’s associations working in the field of nonviolence. There the need for the network of networks arose, as we discovered that there are others doing things in other places and that we do not know each other.

And what conclusions and projects have materialized in the Humanist Forum in the area of Women for Nonviolence?
We are thinking about a new model that overcomes patriarchy, this new model is already emerging and we need to understand the need to change the value system, both women and men. It is good to understand that we have to keep the best of human history and integrate all that is valid in our history.

To awaken femininity in both men and women because we have left it hidden and we need to connect with it and stop having it degraded in order to integrate history.

As an immediate project we propose to advance in the network of networks, interacting, intercommunicating, supporting other actions in the same direction as ours. 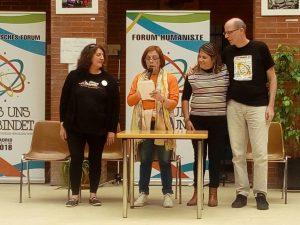