The World March for Peace and Nonviolence route

Jai Jagat and the World March

Both marches will begin on the same date, on October 2, 2019, International Day of Nonviolence. The World March for Peace and Nonviolence [i] (WM) will depart from Madrid (Spain) and Jai Jagat [ii] (JJ) from New Delhi (India).

The World March will arrive in Madrid (Spain) on March 8, 2020 after more than 5 months travelling through the planet, passing through more than 300 cities in some 100 countries. The Jai Jagat March will walk ten thousand km. by 17 countries arriving in Geneva (Switzerland) in September 2020.

Since both Marches start on the same day and have very similar objectives, they have decided to support each other. The collaboration agreements began to take shape in April 2017 in Madrid and concluded in a work conference held on February 18 and 19, 2018 at MGSA, Gwalior (India).

Rafael de la Rubia and Montserrat Prieto, representing World Without Wars &Violence [iii] (WWW&V), organization that promotes the World March, met with a team from Ekta Parishad [iv], organization that promotes Jai Jagat, a leader by Jill Car-Harris and Rajagopal PV In this meeting, and in subsequent meetings with the national coordinators of Ekta Parishad, we talked about how to find the convergence of the two marches and reached several agreements among which we highlight the following:

1. Promote nonviolence in both Marches in their travels and in the preparatory periods. Elaborate different common nonviolence tools.
2. Contemplate Marches and related activities as a means to confront structural violence through active nonviolence, highlighting the problems of inequity, injustice and internal violence as priorities.
3. Introduce children / youth to nonviolence as an ethical proposal that enriches their lives.
4. Promote women as bearers and leaders of nonviolence / peace in different events of the two Marches. Especially in discussions with representatives of governments and legislators.
5. Bear in mind that local governments, municipalities are a central area of ​​focus in the planning of nonviolent societies through the creation of peace departments and the use of peace viewers (observatories of nonviolence) in their policies and programs.
6. Build reciprocity between the two Marches to strengthen common efforts. 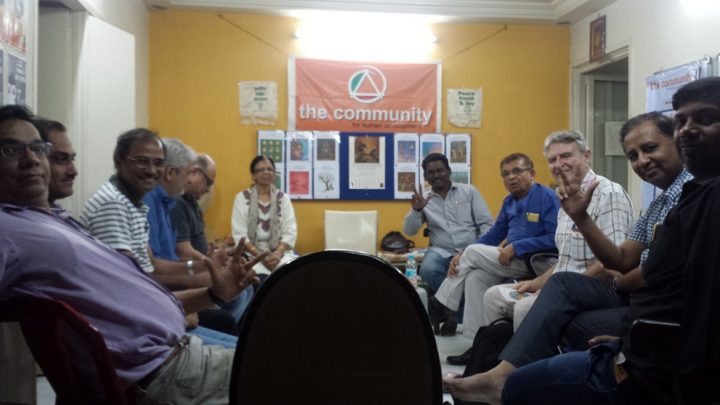 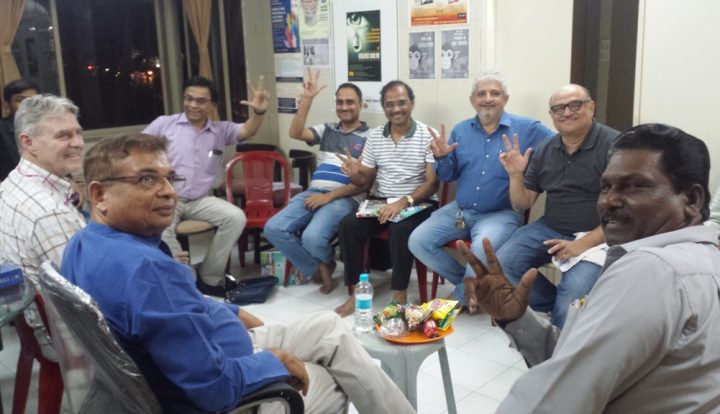 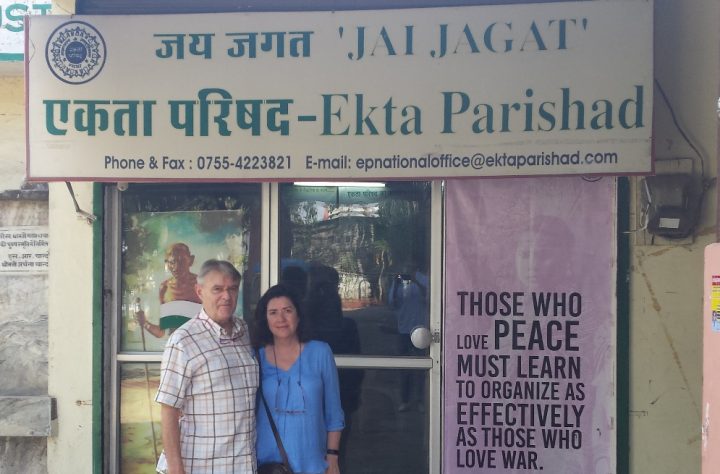 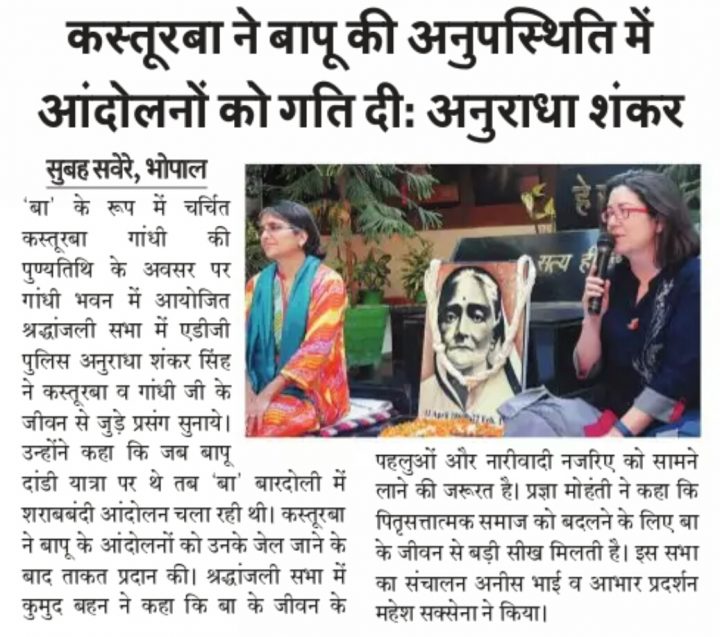 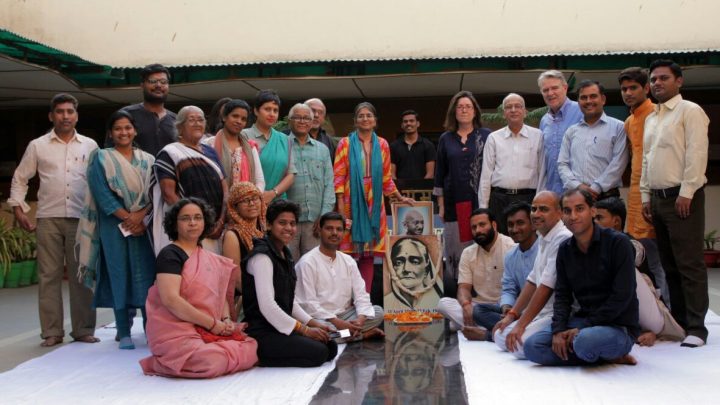 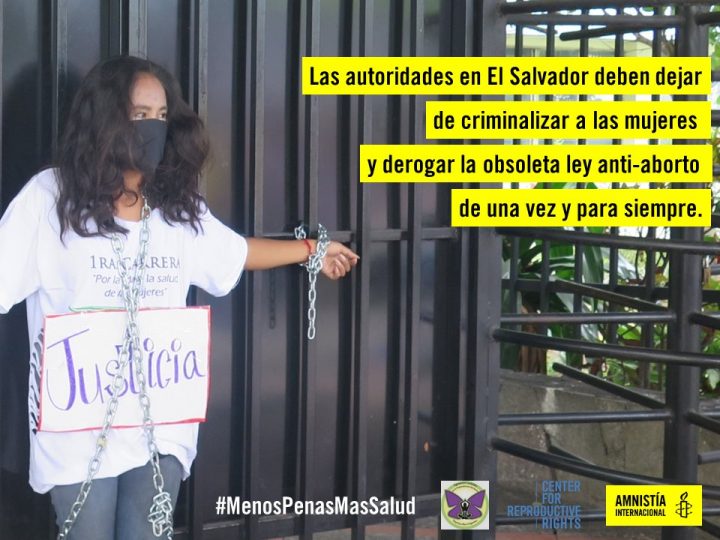 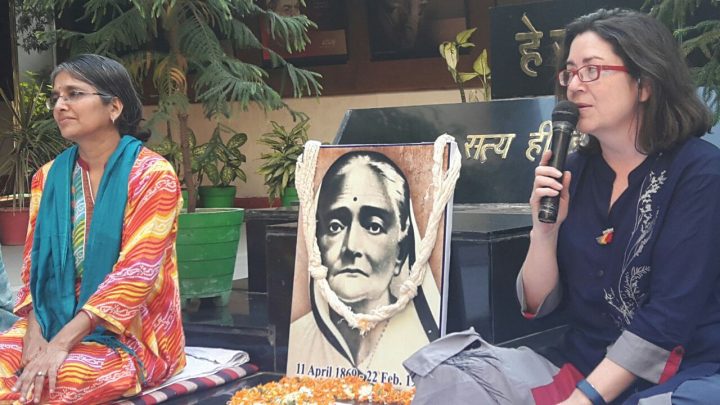 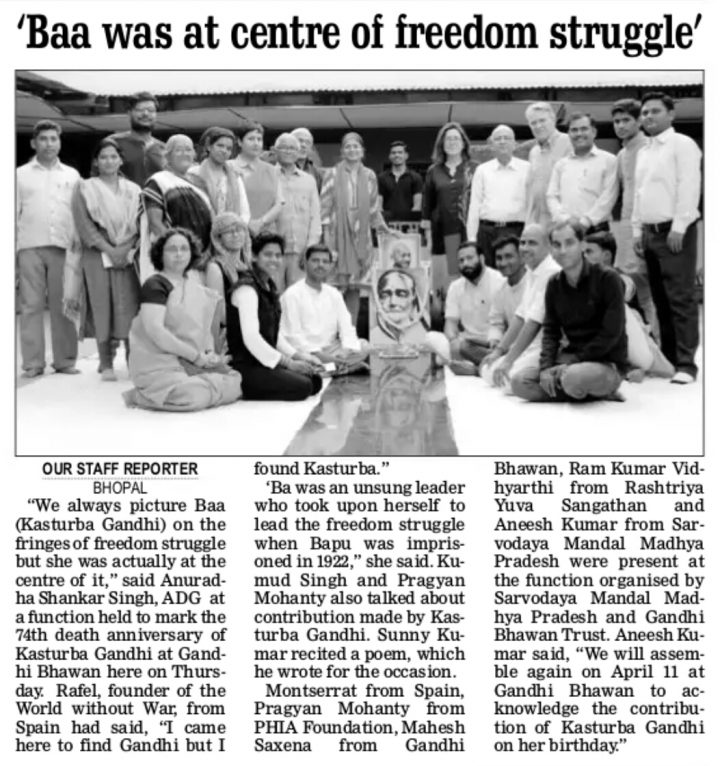 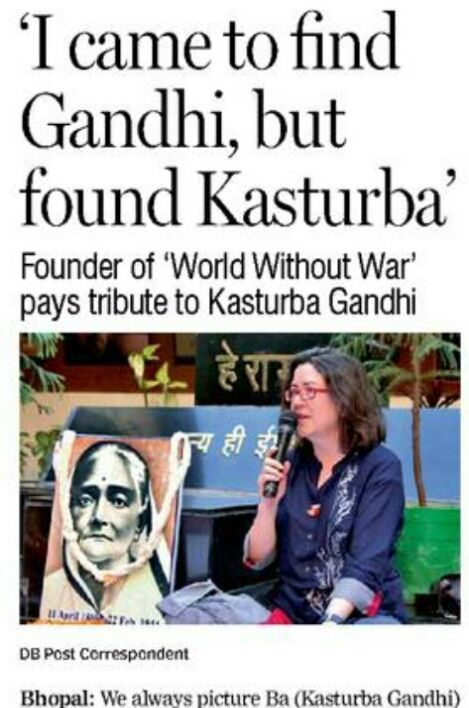 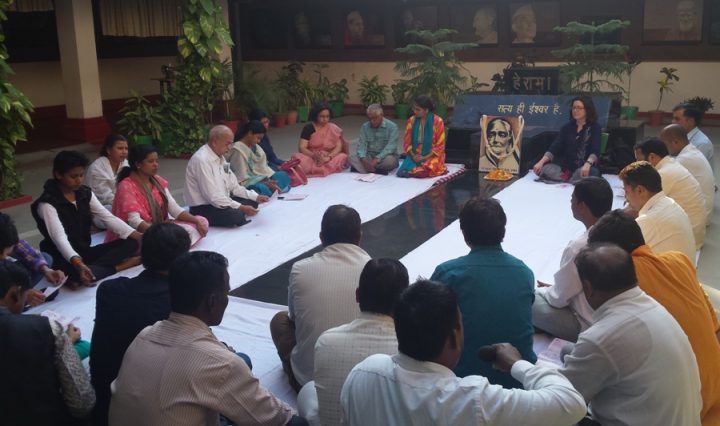 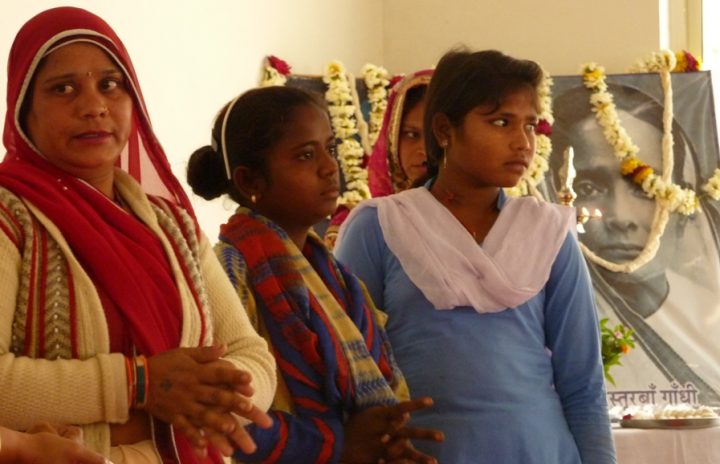 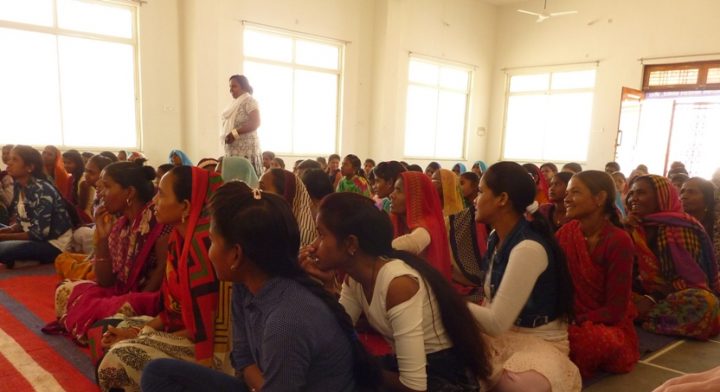 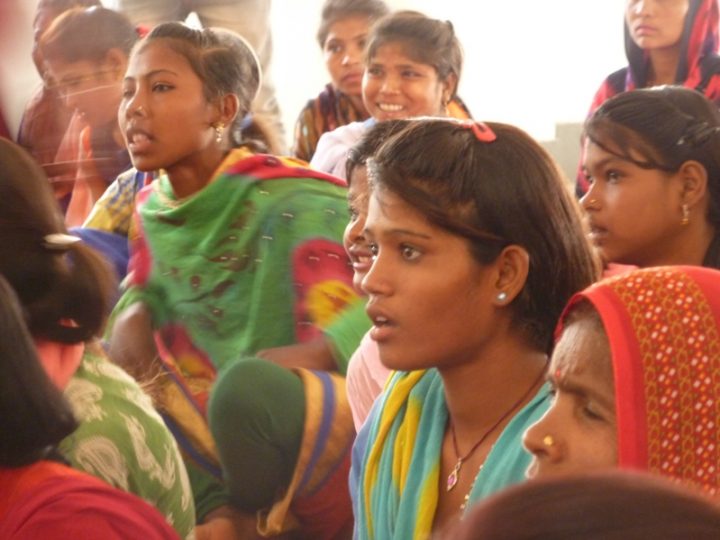 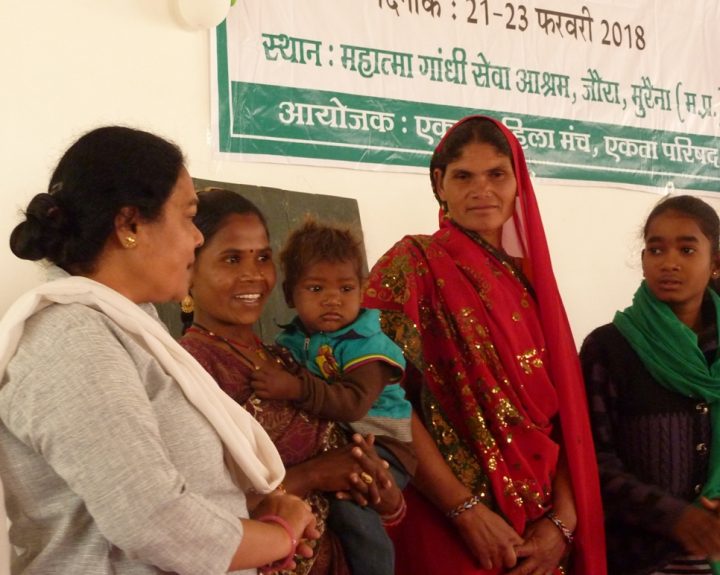 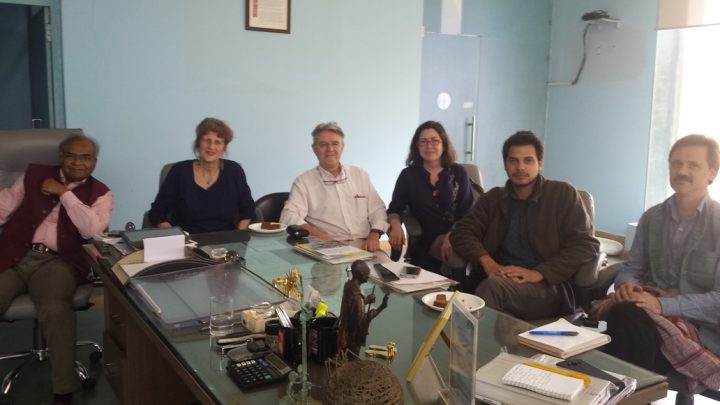 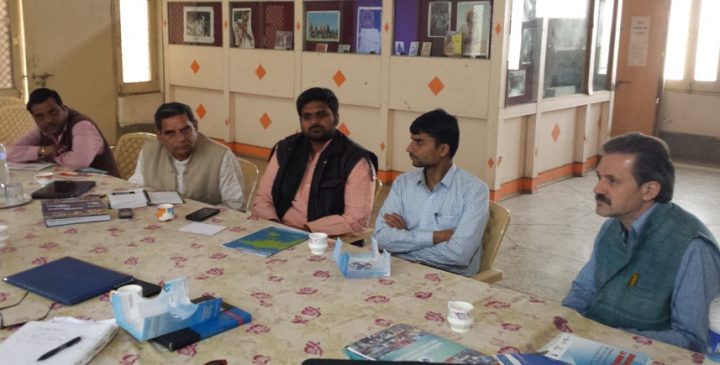 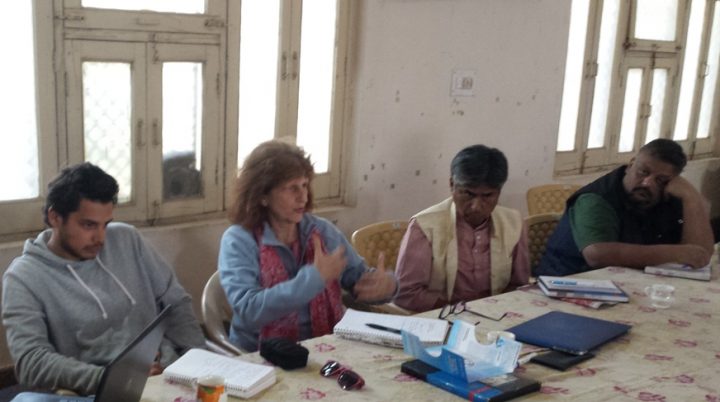 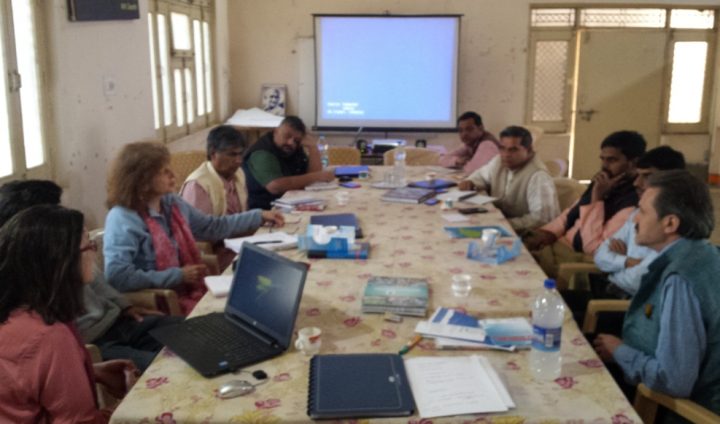 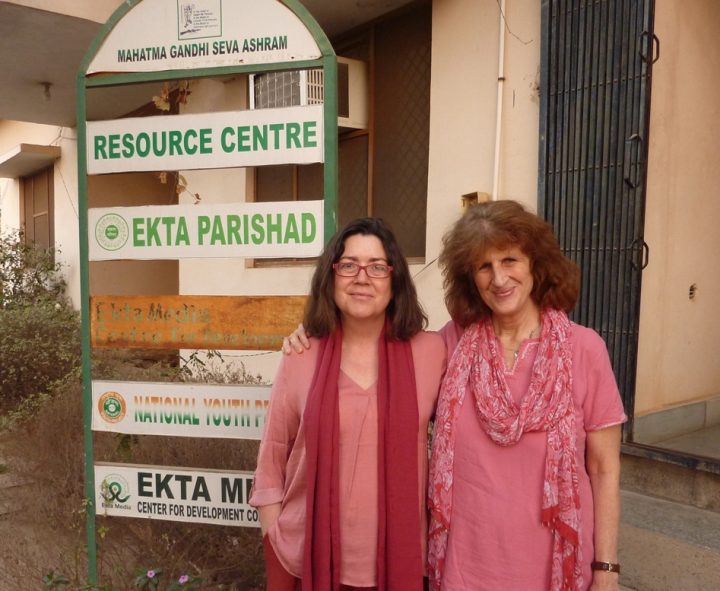 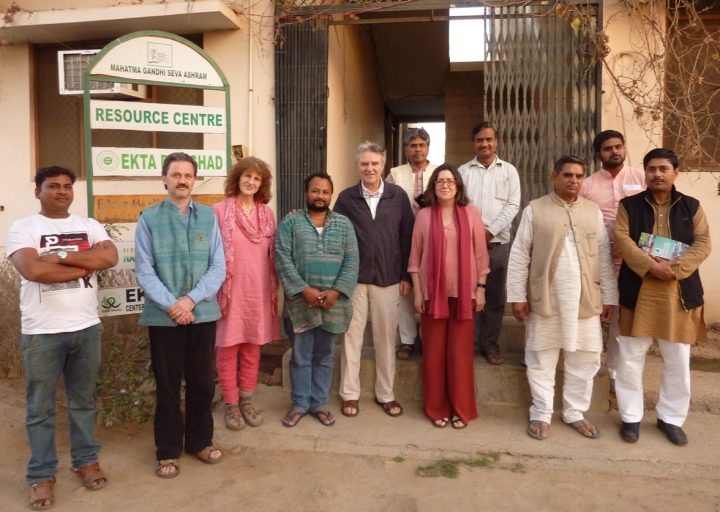 Mutual support strategies were also agreed upon. On the routes to be covered, Ekta Parishad’s support to the WM in its tour of India stands out. Other agreements refer to the development of educational materials on nonviolence at all levels. It is aimed at exchanging experiences, promotion of networking between both marches and the coordination of joint actions along the routes, especially at the beginning and end of both Marches, in addition to other common actions.

Through an agreement of the Rector of the ITM University of Gwalior [v], Mr. Rama Shankar Singh, with the members of Ekta Parishad, will be held on the university campus a conference with the title of Education Material for Master Degree in Nonviolence from 19 to 24 November 2018 in which World without Wars and Violence has been invited to collaborate in the framework of the preparations for the II World March.

Meetings and workshops were also held in New Delhi and in Mumbai with humanist activists and collaborators of the First World March, which were also met by members of the WM’s promoter team who travelled from Kerala. In these meetings progress was reported and the way of joint work with the promoters of the Jai Jagat was agreed.

In Bhopal there was occasion for the activists of the WM to visit different places related to the disaster that Union Carbide [vi] produced in 1984, in which thousands of people lost their lives. In the visit to the hospital that was created to care for the victims, Dr. Satinath Sarangi [vii] reported the enormous consequences of that great tragedy that still affect the population. In conversations with Satinath it was agreed that the next WM will serve to share all these experiences at the global level, so that they can become visible, aware that disasters like this are repeated in many places of the world, but remain hidden.

Also in Bhopal the representatives of WWW&V were invited to commemorate the 74th anniversary of the death of Kasturba Gandhi [viii], the wife of M. Gandhi. There De la Rubia said “we are looking for the roots of Gandhi and we have discovered Kasturba, a great fighter for  nonviolence”. For her part Prieto stressed that “in the next WM the figure of women as carriers of a sensitivity especially close to nonviolence will be enhanced and for this we highlight that the WM will end on March 8, 2020, International Women’s Day”.

The II World March will be arriving in India at the end of January 2020 and will travel through different states for 10 days. India will be one of the last countries to travel through in Asia, before entering Europe through Moscow, in the final stage on the way to Madrid.

[i] World March for Peace and Nonviolence

[iii] World without Wars and Violence

[viii] Article on the 74th anniversary of Kasturba Gandhi