Twenty-four hours after Kenyans woke up to learn that Uhuru Kenyatta, son of the country’s first post-independence president, Jomo Kenyatta, had regained power and will continue as president until 2022, Kenya is still in a sense of heightened tension.

Some violent incidents have been reported with two people killed in Nairobi’s infamous Mathare slum among others, but these are few and peace seems to be holding up.

Many people from neighbourhoods with a mixed-tribal demographic distribution have taken the opportunity to go back and visit family in their rural homes until it can be established that civil war will not break out.

Today the streets of Nairobi are empty and shops are closed for a second day running despite no public holiday being declared, leading some to wonder what will be the impact on the economy and how long the people will survive without having to buy more food.

Raila Odinga, leader of the biggest opposition Orange Democratic Movement party, and son of the country’s first post-independence vice-president, dramatically raised the tensions in a press conference yesterday, calling the elections a sham and saying that the results have been hacked. Echoing cries from the USA of Russian interference in the election of Donald Trump. When asked if he would call for calm, Raila’s response – “I con’t control the people” – left many feeling distinctly worried about what was to come.

Raila’s call is not a surprise given the recent history of Kenya in which the 2007 and 2012 elections were subject to huge levels of corruption which has left the country psychologically scarred for a generation. On both occasions it is almost certain that the Luo leader should have taken his place in State House and was robbed by Kikuyu opposition.

This time though, the evidence for rigging is thin on the ground.

The IEBC (Independent Electoral and Boundary Commission) which oversees the elections and put in place the processes with checks and balances to ensure the results are transparent has done a good job.

Votes are counted in the polling stations and recorded on a, now famous, form 34A. This form records the number of votes and is signed by the party agents. The details of this form are then uploaded to the IEBC website and must be accompanied by a scanned copy of the form for cross checking. The IEBC then has a week to manually cross-check all the 40833 submitted forms against the numbers manually loaded, in order to correct any keying errors.

But what is great about this is that citizens all around the country can check the results for themselves because the forms 34A are posted on the walls of the polling station. Anyone can revisit their polling station, see the numbers written on the form, go to the website and verify the numbers.

As doubts were cast on the integrity of the process by the opposition, Kenyans started a campaign on twitter #PostYourForm34A in which Kenyans do just that and look for the discrepancies.

There are some discrepancies, showing the importance of the cross-checking exercise, but so far, twitter has found no “smoking-gun” which would give credence to opposition claims.

Unfortunately for Raila’s supporters, it appears that Kenyatta has won the election according to the constitutional requirements. It may not be the best result for them, or even for Kenya as a whole given the enormous levels of corruption in the country, but for now it seems they must build a better opposition with a more inspired message for Kenya’s youthful population.

The battle of the old beasts, the sons of freedom fighters from an increasingly forgotten colonial past, should be consigned to history. Maybe an opposition message built on economic policies rather than tribal policies is the way forward… 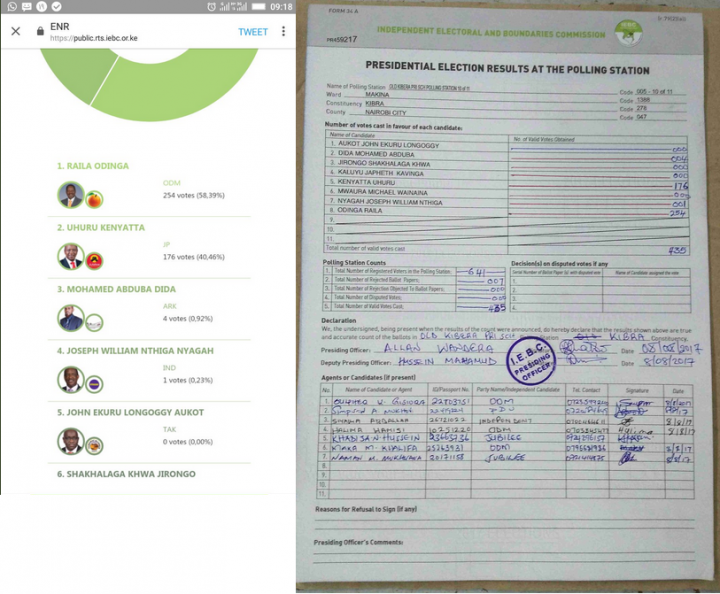