Bait Ur Rouf, the Bangladeshi mosque of Dhaka where this photography was done, is a work of art. The sculptural quality, the use of light, the tranquility of the space, the intelligent use of geometry and the natural ventilation, are some of the features that probably contributed to the Bait Ur Rouf mosque winning the Aga Khan Award for Architecture in 2016. For me, the fact that a woman had donated the land and that her granddaughter designed and built it, are also exciting aspects. It is a mosque with no minarets. No air conditioning. No special altar for the imam. The conceptual similarity with Prophet’s mosque where salient features were, function–form relationships (the square and the cylinder); respect for the environment (use of natural light, non use of air conditioning); cleanliness (the mosque is spotless, with virtually no furniture); comprehensive excellence (the Aga Khan Award for design); promoting just social interactions (no hierarchical position for the imam), indigenous versus foreign influences (use of local bricks without plaster), increases its authenticity.

The current level of religious intolerance in the globe is part of a more general environment of intolerance and more specifically, suppression of dissent. The “War on Terror” and the imperialist warmongering that preceded it have stoked huge unrest in the non-western world, though much smaller violent incidents in the west, generally take up most of global media’s coverage. The average person and people living in Islamic regions in particular feel far less secure than they have done in recent times. Total disregard for human rights, greed, blatant hypocrisy, and an unabashed promotion of the military industrial complex has led to the crisis we are in.

The average Bangladeshis are God-fearing, religious and Muslim. They are neither fundamentalist nor inclined towards violence. The lumping of Islam with violence, and the inability of left leaning and secularist groups to engage with Islam has not only created distance, but also made it difficult to have conversations on common ground. On the other hand, Islam has always been a very pragmatic religion, and deals with almost every facet of one’s life from sex to business. The first urban element introduced by the Prophet to the city of Madinah was the mosque, which functioned as a community development center It was used as a centre for religious activities, as a learning centre, as the seat of the Prophet’s government, as a welfare and charity centre, as a detention and rehabilitation centre, as a place for medical treatment and nursing, as a place for leisure activities. The Prophet is even known to have made arrangements for women to sleep in the mosque, and for non-Muslims to pray there. It is this openness and the ability to reach out to the other, that appears to be missing today, in everyday life and in the mosque itself. 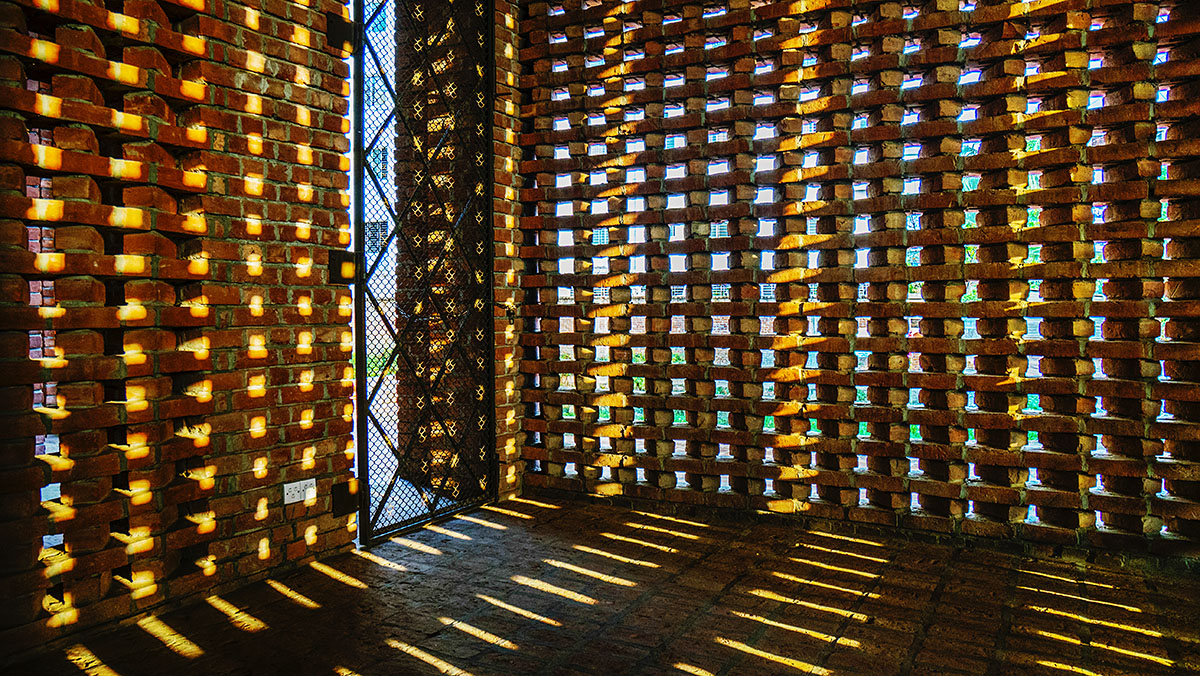 A common perception that photography is forbidden in Islam, is ludicrous as photography has only been in existence for less than two centuries. Islam does prohibit idolatry, but neither does that require photography, nor is the medium used specifically for that purpose.

In my numerous visits to the mosque, I of course saw people praying. I also saw people (invariably men), sleeping, eating, and conversing. I saw children running around. I even found a goat one day, and then a sparrow came in, trying to find a nesting place. As I walked through one afternoon, watching the shadows dance across the bricks, I came across a red cricket ball. It seemed to fit in with the bare brick floor. It was similar in colour and the inner curve of the cylinder complemented its shape. It was not what I was expecting. The following day, during the Jumma prayers (Friday, the holy day in Islam, day of obligatory public worship), another cricket ball, this one, newer and more brightly-coloured bounced in. I anticipated angry voices. I didn’t think the special prayer of the week being disturbed by playful children, would be taken lightly. I was surprised as one of the devotees in the front row, caught the ball, smiled, looked around and sent it back through the gap in the wall in the mehrab kept to mark the kebla, the direction of the Kaaba in Mecca. This mosque I sensed was different. It was a lived, open space, forgiving, open and receptive, just as the Prophet had intended mosques to be.

The idea of this exhibition, who was held at the mosque on one single day (May 8, 2017), is to both remind the religious that Islam endorses a much more inclusive culture than is practiced either within or outside mosques, and remind secularists that religion was designed as a force for social cohesion, rather than division. At a personal level, I also want to be able to access the mosque for my art. Can you imagine a thousand mosques in Dhaka city suddenly becoming available to all?

If this show succeeds in bringing in people who would normally have never entered a mosque. If it challenges the devout by making them question their method of worship. If it helps the mosque become the inclusive community space all mosques were intended to be, it will be a major step forward for the young and the old, for men and for women, for believers and non believers alike.

Shahidul Alam is photographer, writer, curator and activist, recipient of the Shilpakala Award, the highest national award given to Bangladeshi artists.