US senator praises Labour leader’s effort to transform politics and take on establishment, seeing parallels with his own campaign’ The Guardian. In spite of not officially endorsing Corbyn or anybody else as that would be inappropriate, Bernie Sanders speaking in Brighton highlighted the many common points between his proposals and the Labour Party ones: “I am also impressed by his willingness to talk about class issues,” he added during a sold-out speech at the Brighton festival. “Too many people run away from the grotesque levels of income and wealth inequality that exist in the United States, the UK and all over the world. We will never make the kind of changes we need unless we take on the levels of inequality that exist.” 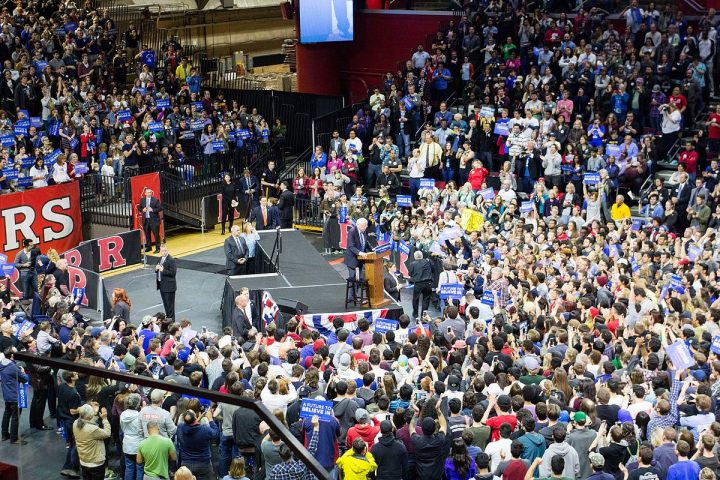 Bernie Sanders at Rutgers University May 2016

Coinciding with these statements there has been a recent study carried out by Annette Alstadseter (Norwegian University of Life Sciences) et al,  titled “Tax Evasion and Inequality” which reports that “…tax evasion rises sharply with wealth, a phenomenon that random audits fail to capture. On average about 3% of personal taxes are evaded in Scandinavia, but this figure rises to about 30% in the top 0.01% of the wealth distribution, a group that includes households with more than $40 million in net wealth.”

Although the research was not carried out in the UK, the sources, such as the Panama Papers, indicate this is an international problem. Policies such as increasing taxes for the very rich, the “Robin Hood Tax” on speculation and preventing tax evasion through Tax Havens are not only timely but also essential to begin to balance years of austerity that have left vital Health and Education services starved of funds.

Unless Inequality is recognised as a form of Economic Violence, ideologies that justify the accumulation of wealth to the detriment of the well being of the majority of people will continue to exert their poisonous influence. The arrival of mechanisation will compound the problem by making large numbers of people unemployable as their jobs are outsourced not to India but outside the human race altogether, that is, to the robots. This would be great news if there was a consensus to reduce progressively the working week and redistribute wealth through Universal Basic Income or similar schemes. For that we need a change of paradigm and a change of heart to take place in society. Perhaps the “novel” idea of solidarity raised by the Labour Party for these elections, as finally the realisation that competition and individualism cannot deliver a happy society begins to penetrate our neoliberally brainwashed consciousness, will manage to change the course of history.

We are reminded of Silo’s words in 2004 “…the peoples will experience a growing yearning for progress for all, understanding that progress for the few ends up being progress for no one.” And “The Spirit Level: Why More Equal Societies Almost Always Do Better” a book by Richard G. Wilkinson and Kate Pickett which through careful research demonstrates the “pernicious effects that inequality has on societies: eroding trust, increasing anxiety and illness, (and) encouraging excessive consumption”. Wikipedia. The study shows that the health of the rich also gets better when the health of the whole population improves.

Solidarity and reduction of income inequality is not about the wealthy making sacrifices. They work for everyone!