Vladimir Posner, who spent his youth in the United States, France, and the Soviet Union, and who cohosted a show with Phil Donahue on U.S. television for years, met with a group of visitors to Moscow from the U.S. on Monday, offering his well-informed views on a range of media-related topics.

Posner said that for years he worked on Soviet propaganda aimed at the United States. The first blow to his full belief in the rectitude of the USSR came, he said, with the Soviet invasion of Czechoslovakia in 1968. He eventually concluded that he was not telling the truth, that by telling only good things he was telling half the truth, which is a falsehood. He quit the job and he quit the Communist Party.

In the days of Gorbachev, Posner was permitted to travel, and moved back to the United States, where he co-hosted that program with Donahue until CNBC got a new president by the name of Roger Ailes. The new boss demanded the right to approve or reject topics or guests. “That’s censorship,” Posner told him. “I don’t give a rat’s ass what you call it,” Ailes replied.

So, back to Moscow it was. Posner has hosted his current weekly television show in Russia for 8 years. He says he will never again work for a government or a party, and he’ll sign a contract with a company only if it leaves him independent control. 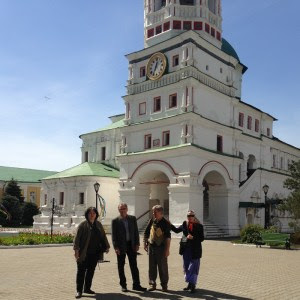 We had heard from other Russian journalists in the preceding days who had painted a very positive picture of Russian media, telling us that there is no censorship, and that more newspapers in Russia oppose Putin than support him. Posner has a bit stricter definition of censorship, I think, as well as a television perspective. “Anyone who told you there are no restrictions on Russian media was not telling you the truth,” he said.

He said that Russia’s state television channels (1, 2, and 4, and Red TV) serve the government and dominate the audience. “There are things you cannot say and people you cannot invite on,” he said. “You cannot criticize Putin on those networks.” On smaller, private networks you can, as well as in print and on radio. “The smaller your audience, the greater your freedom.” Posner agreed that several newspapers oppose Putin, but denied that they are a majority, and dismissed their audience as no more than 1 million readers, albeit an elite readership. One of the main reasons that Putin has 80% support, Posner said, is state television. The party line in Russia and the company line in the U.S. amount to about the same thing, Posner said.

Asked later for the most common complaints with Putin, Posner didn’t offer any. Instead, he tried to explain Putin’s popularity; and the explanation may have been understood as functioning through television spin, but it also seemed factual. Posner said that people see Putin as having stood up to the 800-pound American gorilla, restoring pride to the disrespected federation of Russia. Russians were ready to be hugged when they got rid of communism. Instead they were given the rotten deals of the 1990s and now endure sanctions that have lowered incomes by 10% to 12% (while benefitting Russian agriculture) — a state of affairs that Posner predicted would win absolutely no concessions out of Russia.

Posner offered as an example of a dishonest company line Christiane Amanpour of CNN, who had never been to Crimea, reporting that people in Crimea voted to rejoin Russia only under the threat of Russian soldiers. “She was lying.”

Posner suggested that David Remnick of the New Yorker is better informed yet seemingly writes something very different from what he must know. Posner said that the New Yorker‘s ownership by Conde Nast is typical of a trend away from independence in the U.S.

Asked about Russia Today (or RT, Russian TV for Americans) he dismissed it as propaganda showing only the good in Russia and only the bad in the United States. But for those of us who ignore RT reporting on Russia and appreciate its reporting on uncovered topics in the U.S., Posner seems right only up to a point when he states that no audience will ever turn to a foreign source over a domestic one. In fact, Posner immediately offered the counter-example of the popularity of the Voice of America, the BBC, and German broadcasting in the USSR.

Posner glides effortlessly from criticizing Russian media to criticizing U.S. media and back again. The U.S. media, he says, has demonized Russia since 1918 and has done so far more than Russian or Soviet media has ever done the same to the United States. In Posner’s estimation, Putin is demonized in U.S. media in ways that even Stalin was never subjected to. He cited as an example a graphic depicting Putin’s shadow as falling over a downed airplane in Ukraine. Putin asked to join the EU, for goodness sake, he asked to join NATO, and the U.S. turned him down, explained Posner.

Posner said that when he was a kid in the United States, Americans knew that it was the Soviet Union that won World War II, and loved Russia for it. Now, Americans have no idea. Russians, meanwhile, have come to identify Americans with their government’s hostile policies to a degree not seen during the Cold War. Everyone used to like Americans and dress like Americans, etc.

Posner explains the Russian attitude as the product of Russian propaganda and of the absence of stories of Americans protesting Washington. (I gave Posner thousands of messages from Americans hoping to fill that gap.) Posner also blamed the failure of the U.S. to provide anything like a Marshall Plan in the 1990s, or to assist in the development of democracy, something Russia had never had. Asked whether the Marshall Plan in Germany and Japan had left Europe and Japan totally subordinate to the United States, and whether Russia would have suffered the same fate, Posner seemed inclined to believe that is not what would have happened.

Asked why Russians are so attracted to capitalism, Posner explained that people used to wait in lines for everything, and then suddenly everything was available in stores for anyone who had money. Now, he said, nothing is more important than money. He said that young people prefer the professions that make the most money. (That’s not my limited experience with young Russians.) Posner later said that Russia is like the United States in believing it has a mission. He described the mission as being against materialism. Of course, both of these strains (money worshipping and money despising) can be present in Russians without contradiction, but which wins out seems undetermined, as well as whether both are real. Posner did not seem to believe the Russian belief in its anti-materialism was actually justified.

What advice would you give to Trump, someone asked Posner.

He would tell him that the big problems of the world (he listed climate change and terrorism, among others — one of which Trump doesn’t believe in, and both of which Trump enthusiastically engages in) cannot be solved without Russia, and without China as well.

The stories Posner told are too many for me to recount them all, but here are four.