A quick recap of where DiEM25 is today: The movement kicked off in Berlin last February, quickly followed by two other important events in the Spring: the launch of DiEM25’s Transparency campaign in Rome, and its Refugees and Migration Assembly in Vienna. The summer saw DiEM25 get organised: it established itself legally, thousands of its members across Europe developed and voted on the movement’s Organising Principles, the teams that will guide and coordinate its activities (the Advisory Panel and the Coordinating Collective) were voted in, and the Validating Council was opened for nominations.

But DiEM25’s summer days were not just about internal processes! Throughout the season, its volunteers and activists from every corner of the Union undertook actions and hosted events based on DiEM25’s Manifesto. These volunteers and activists make up the movement’s DSCs (DiEM25 Spontaneous Collectives), the essential grassroots element of a bottom-up transnational struggle to democratise the European Union.

In the weeks following DiEM25’s launch, 17,000 members quickly signed up on the website. 70% of these new members wanting to volunteer. “We decided to give members broad autonomy to create local DiEM25 groups (DSCs) that would organise activities and discussions in every city in the EU and even beyond,” said Judith Meyer, DiEM25’s Volunteer Coordinator. “This was absolutely the right decision. Thanks to the work of the DSCs, DiEM25 is now able to be in many places at once and listen and react to the concerns of people all over Europe,” she continued, as DiEM25’s membership rapidly expands to hit the 30-thousand mark.

It’s inspiring, indeed, to see what several collectives of this still-young movement have managed to accomplish in such a short period. To understand the phenomenon better, let’s look three different collectives and their progress thus far.

Virginia Alvarez from the Amsterdam DSC shared some of their highlights with me. One of them was a motivating discussion on some of DiEM25’s policy pillars with Saskia Sassen (the renowned sociologist noted for her analyses of globalisation and international human migration, and a member of DiEM25’s Advisory Panel). Saskia met the group after speaking at the Redesigning the democratic institutionalisation event at a sold-out venue in Amsterdam. 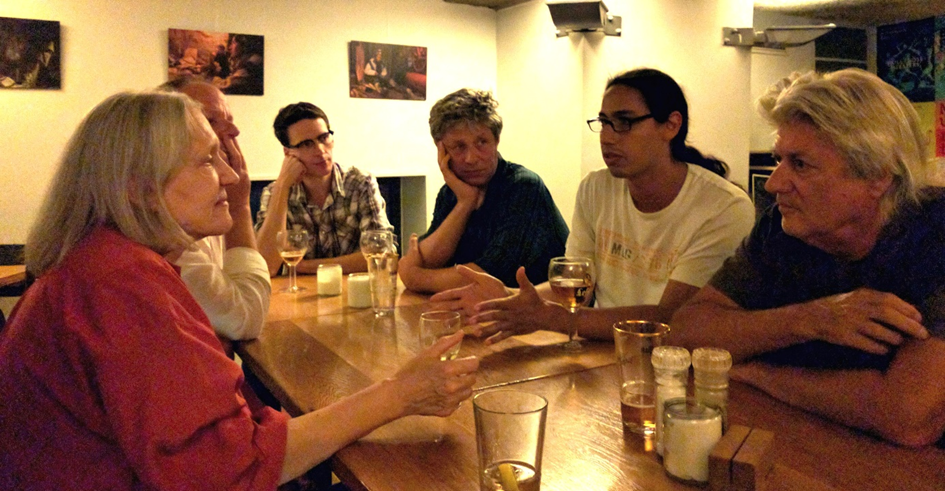 Members of the Amsterdam DSC meeting with Saskia Sassen.

While policy discussions between DiEM25’s APs and its members certainly provide motivation and lead to solid policy work, what truly amazed me was to learn about the creation of the DiEM25 Citizen University Amsterdam (DCU): a space for intellectual exchange, debate and brainstorming on the Europe we want to live in.

VU University generously provides locations for regular seminars about topics like Transparency, TTiP and Democracy, DiEM25’s ‘European New Deal’ and more. These seminars are held by DiEM25 members and external lecturers, and participation is free and open to everyone. In line with the movement’s aim to embrace plurality, the participants in those seminars tend to be very diverse too. 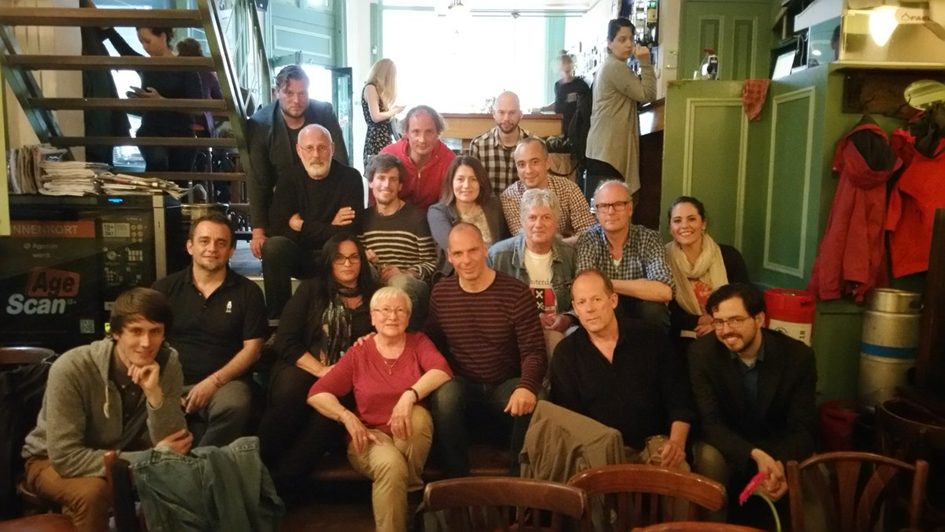 Last but not least, Yanis made a stopover in the Dutch capital, which was an opportunity for him to meet with the movement’s members and share a relaxed, but mutually enriching conversation.

Barcelona: On a mission to expand DiEM25

Heading south on our European tour of DiEM25’s DSCs we reach the city of Barcelona. The group, which first gathered last June during Varoufakis’ visit to the “rebel city,” is now focusing on becoming organised and on discussing and developing political content. But don’t get the wrong impression! Here you’ll find true activists. Chatting on Skype with Emma Igual, one of the two Barcelona DSC coordinators, she told me that she was sick at home. I apologised for inconveniencing her, but she told me not to worry: “It prevents me from sitting here getting angry.”

The Barcelona collective is made up of 20 regular members who attend their physical meetings, plus some 15 who participate online. They have set up different committees dealing with matters of organisation (communications and social media, video production, event planning, etc.), as well as workgroups focused on developing content for DiEM25’s Progressive Agenda for Europe. “These workgroups were originally meeting on a weekly basis, but we realised we were going way too fast and had to slow down. Now, we meet every two weeks,” said Emma. I could feel the energy and enthusiasm in her words. 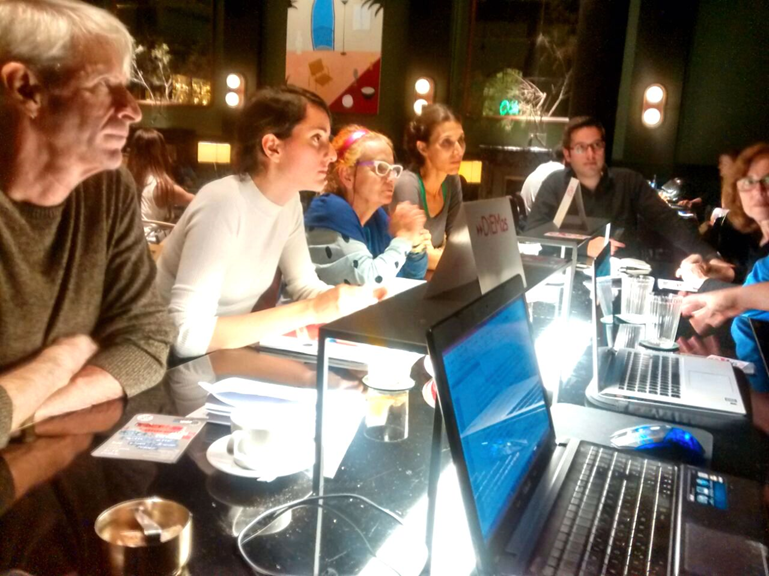 For me, the Barcelona DSC are the champions of taking care of new members and trying to help expand DiEM25’s volunteer network. They have developed a “welcome kit” for new “DiEMers,” and will soon publish a video as an introduction to DiEM25.

As they continue to grow and consolidate their group, the folks behind the Barcelona DSC have started to search online and offline to reach out to people in Catalonia who may be interested in creating a DSC in their own towns and help get them going. So there’s the chance that new DSCs will take root in Girona, Tarragona and other places in the very near future. With the newly-formed collectives in other Spanish cities like Madrid and Oviedo, the Barcelona DSC is actively engaged in sharing their experience with them and help grow the movement beyond Catalonia. 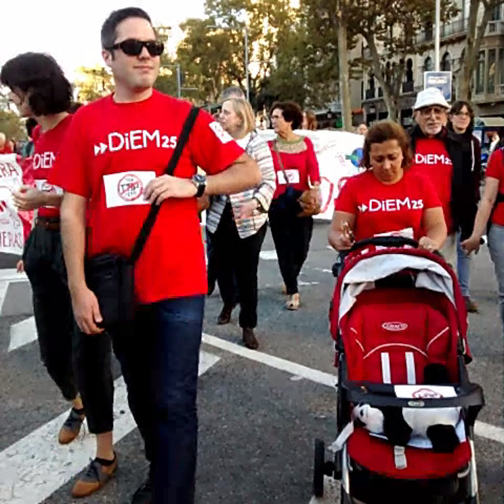 I asked Emma about their activities. “We have to promote debates on what people are interested in,” she said. “The issues of our movement have to relate to what concerns ordinary people.” Being busy with the above, they have only just started to implement such debates, participating in a human chain against TTiP, CETA and TISA a few weeks ago (which was a big success). Many people approached them during that demonstration, asking for information about DiEM25. ATTAC (the Association for the Taxation of financial Transactions and Citizen’s Action) used the opportunity to invite them to their headquarters to tell their members about the objectives and activities of the movement, as well as to participate in a conference on European Economics in the near future. Also, both DSC Barcelona coordinators, Emma Igual and Marc Almagro, will be giving a lecture called “The crises of Europe and the future of the Union” at the “Repensem Europa” (Rethinking Europe) European Green Activist Training cycle at the end of October.

South Bohemia: Joining the struggle against nationalism and xenophobia

Time to visit central Europe, more specifically the south of the Czech Republic, where the South Bohemia DSC is located. Eight members meet regularly in the city of České Budějovice. They are mostly political activists coming from the ProAlt movement (an initiative critical of government reforms and austerity measures), members of the former local coalition “Together” which participated in the last municipal elections, as well as local members of the Pirate and Green parties. 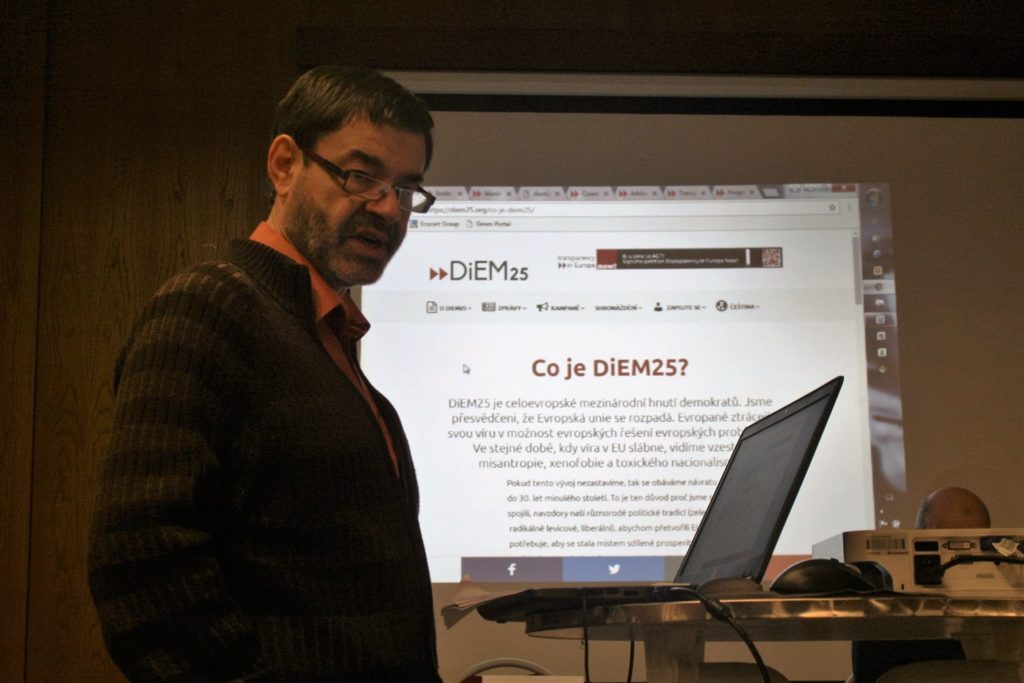 “We realise that the current problems at a national and European level cannot be solved without cooperation within the EU. We also resent the current negative atmosphere, which includes both xenophobic and anti-European sentiment. The DiEM25 Manifesto brings a positive vision that is very close to our way of thinking,” says Antonín Hořčica, the group’s coordinator, referring to the brutal attack of our DiEM25 member Alena Krempaská by neo-fascists at the beginning of September. The attack was a sad example of why a humanist and progressive vision is so needed at this moment in Europe.

The South Bohemia collective started its activities by translating the manifesto and other important DiEM25 documents into Czech. They engaged in the campaign “Transparency in Europe now!” and participated in the Assembly in Vienna last May. A main focus for this DSC has been networking with other organisations and DiEM25 members spread around the country, and promoting the creation of other DSCs. 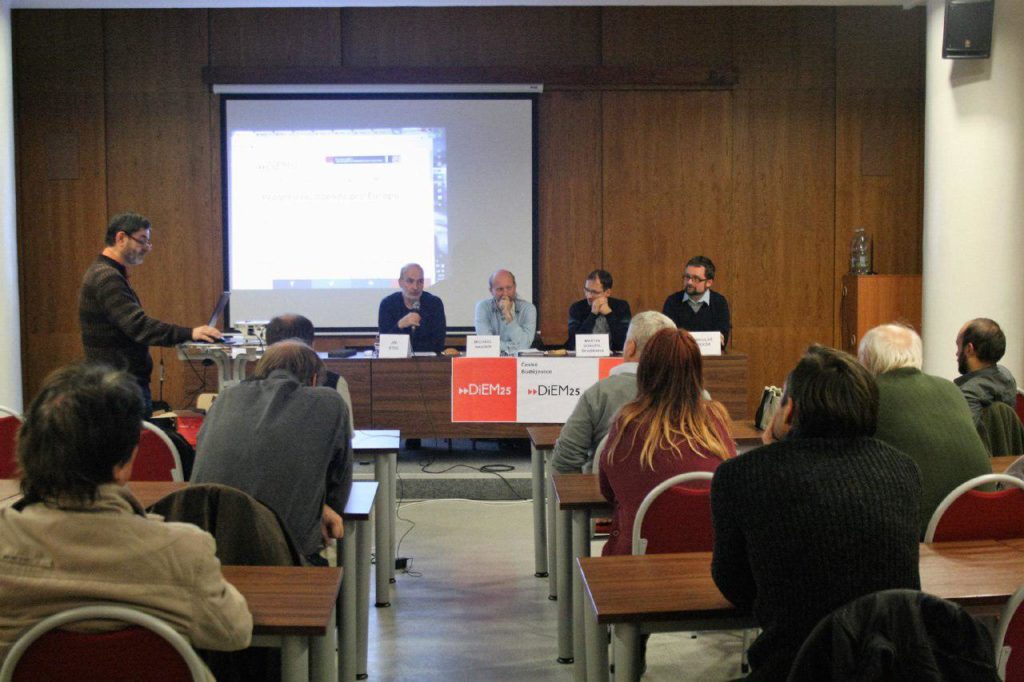 Debate on European integration organized by the South Bohemia DSC with cooperation of the Ecumenical Academy.

The DSC seized the chance to promote DiEM25 in public debates on several occasions, like the Summer Academy of the Green Party and in a public lecture in Budějovice about the Czech economy’s dependence on multinational corporations. They are making an important contribution towards strengthening DiEM25 in Central and East Europe too.

These are just a few examples of the activities DiEM25 members across Europe are engaged in and how DSCs are contributing to the construction of a Europe of the people. Just stay tuned to for more news from DiEM25’s DSCs or connect with the growing volunteer network through the directory.

DiEM25
DiEM25 is a pan-European, cross-border movement of democrats. We believe that the European Union is disintegrating. Europeans are losing their faith in the possibility of European solutions to European problems. At the same time as faith in the EU is waning, we see a rise of misanthropy, xenophobia and toxic nationalism.