‘Our country wasn’t run by Brussels, it’s run by boardrooms across the world,’ says Labour Party leader as he calls for pro-worker public investments, peace abroad, and a clean energy transition

Leader of the British Labour Party Jeremy Corbyn announced a 10-point plan on Thursday designed to “rebuild and transform” the U.K. while undoing the damage wrought by privatization schemes and concerted attacks on the public good.

Corbyn launched his plan with a series of social media messages, including this short YouTube video explaining the need for a national transition:

The ten pledges include: An economy that works for all; Secure homes for all; Security at work; Secure our National Health Service and social care; A free national education service; Action to secure the environment; Democracy in our economy; Cut income and wealth inequality; Act to end prejudice and injustice; and Peace and justice abroad

Corbyn’s announcement comes as he battles to retain his leadership position in the Labour Party, fighting off a challenge from Owen Smith, a more centrist Labour MP and former lobbyist for the pharmaceutical industry. The two will square off in a debate Thursday night.

Like Bernie Sanders’ presidential campaign in the U.S., Corbyn has been seen as a progressive champion fomenting a populist insurgency against entrenched interests of powerful elites represented by the Tories, other right-wing parties like UKIP, and factions of Labour’s own liberal center-left.

In an op-ed published Thursday morning, Corbyn rejects the impulse to leave the European Union but also argues that those who voted for Brexit earlier this summer—frustrated by lack of jobs and a government beholden to corporate interests—could no longer be ignored by the nation’s leaders. “It seems anyone can run our country except ourselves,” Corbyn writes. But, he added, “Leaving the EU won’t change any of this… Our country wasn’t run by Brussels, it’s run by boardrooms across the world.”

Corbyn goes on to lament the partial privatization of the nation’s health system and transportation networks while vowing to invest mightily in workers, clean energy, and public infrastructure. Under his leadership, he writes:

Labour will end the rip off, bring the railways into public ownership and invest in new community owned energy.

Whole communities have been left behind as high-skilled and secure jobs have vanished alongside our once great industrial sector.

That’s why Labour has set out a plan for a National Investment Bank that will deliver an extra £500 billion of investment to reverse our decline – channelled through regional investment banks to meet local needs, such as a ‘Bank of the North’.

To rebuild and transform Britain so that no one and nowhere is left behind.

The overall plan is contained in ten pledges which put everyday people at the center of a pro-democracy agenda aimed at a more egalitarian economic vision, an end to war and violence, and a more sustainable energy future: 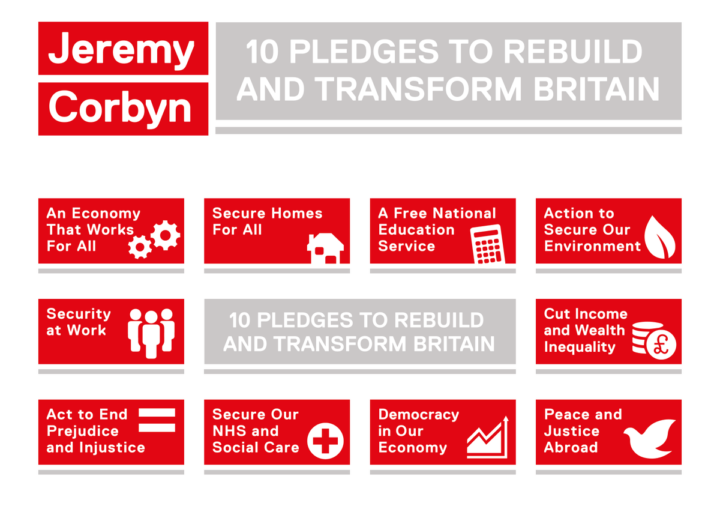