14 August 2016 (RT) – Following 18 months of violence, engineered starvation and a blatant media blackout, Yemen’s suffering has risen to the surface – one hot bubbling shame, the one conflict few have dared discuss for fear of financial repercussions.

I realize that truth and honesty are hard commodities to come by, but let’s momentarily try them on for size and see if how they fit. Let’s see if we can stomach the reality the people of Yemen have had to live under as the global community chose to avert its gaze.

Yes, a school was bombed and children were butchered. Yemen was violated and scarred beyond the tolerable and the comprehensible. What else is new? Yemen has died a thousand deaths already, and none have come to its rescue.

Yemenis have pleaded, argued and debated for 18 months, calling for inquiries, calling for a humanitarian corridor, calling on the international community to heed the cries of a nation caught in the fires of war. The world answered by way of deafening silence.

As you look on in disgust to the charred bodies of innocent school children realize that such barbaric attacks have become Yemen’s daily bread. Since March 25, 2015, when Saudi Arabia unilaterally declared war on Yemen, an entire nation has been subjected to unfathomable abuses – so unfathomable in fact that the United Nations even kept mum to avoid facing the consequences of such human rights abuses.

I remember still how quickly UN Secretary General Ban Ki Moon had to reinstate Saudi Arabia after labeling it a war criminal in its annual Children and Armed Conflict report. I remember how an allegedly impartial party was brought to a standstill after Riyadh threatened to withdraw its financial contributions.

“The report describes horrors no child should have to face,” Ban Ki Moon said in July. “At the same time, I also had to consider the very real prospect that millions of other children would suffer grievously if, as was suggested to me, countries would defund many U.N. programs.”

Regardless of anyone’s political persuasion, regardless even of what you may think of Yemen’s Resistance movement, or the right of nations to exercise political self-determination, mass murder remains an inexcusable crime for which there is no excuse, no rationale, and no justification.

Children should never be treated as legitimate targets, not if we are still serious about the rule of law, not if we are to still stand and call ourselves civilized, not if we are in fact to have a claim on our very humanity.

By all means be angry at Riyadh for the death and violence it has rained on Yemen. Be outraged and sickened by one country’s insistence to lay waste to another so that it could impose its rule, and its theocratic model against an aspiring republic; but remember those parties which empowered al-Saud military. 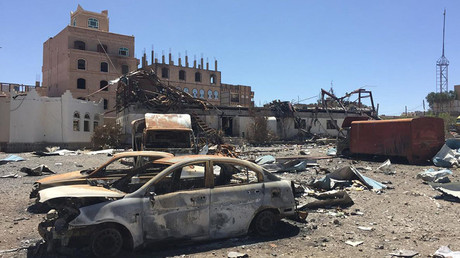 Remember those “experts” who sit today in Riyadh’s war rooms as children are sent to slaughter. Remember whose weapons and military know-how have been spent towards the killing of Yemen.

If Saudi Arabia should be held accountable – not that we are holding our breath, it should not stand alone in the booth of the accused – the United States and the United Kingdom have a lot to answer to.

I would actually argue that in this particular case, guilt lies not with those who pulled the trigger (after all, it is in the nature of the scorpion to sting) but those who provided a steady flow of fire power.

But then again it is in the nature of capitalists to turn a profit. Money they say has no smell. Money they say is and end in itself, and its call should never be denied. Who could in fact refuse the powerful song of al-Saud billions.

Who indeed? This is the reality of capitalism. The bloodshed you see on your screen is what our democracies bought, and what our global institutions are powerless to denounce. What happens when the bloodshed hits closer to home? What happens when war capitalists decide to train in your back garden and turn your children into target practice?

Silence will muzzle your outrage. Silence and one good dose of political impotency. We still speak of war crimes as if we could really punish the offenders. We speak of Yemen today as if we were serious about offering solace to those in mourning. Yemen should have taught you that our world system is broken. Actually not broken, but rather sold-out.

But silence today has a price, but we simply chose not to face uncomfortable realities. Why? Because admitting to an injustice would force us to enact reparation – and this requires actual courage.

The kind of courage Yemen has demonstrated as the world firmly looked away.
But guilt is not a burden the kingdom should bear alone. Guilt is still more pronounced in London and Washington since it is there, in those corridors of power that Yemeni lives were forfeited.

Blaming the kingdom will achieve little by way of reparation; it is our broken institutions which need to be challenged, and redressed. If not, there will be many more innocent Yemen children to cry over in the near future.

*Catherine Shakdam is a political analyst, writer and commentator for the Middle East with a special focus on radical movements and Yemen.

A regular pundit on RT and other networks her work has appeared in major publications: MintPress, the Foreign Policy Journal, Mehr News and many others.

Director of Programs at the Shafaqna Institute for Middle Eastern Studies, Catherine is also the co-founder of Veritas Consulting.

Catherine Shakdam’s Op-Edge was published in RT. Go to Original.