I was invited to speak recently on a panel hosted by Pressenza at the DW Media Forum in Bonn, Germany on The Arms industry and Ethics. In the process of developing my presentation and compiling data on the US military economy and its presence in the world, something happened to my beliefs. I always thought that if we kept working for peace and nonviolence, we would be able to overcome conflict and change the direction towards war. Today this belief is gone; the world is on fire, conflict and violence have gained space on every continent, and the peace movement of the 60s is almost nonexistent.

Where did my belief come from? How could I have been so naive? As Humanists, we have some universal principles that can help shed light on complicated situations. One of these principles says: “You will make your conflicts disappear when you understand them in their ultimate root, not when you want to resolve them.” We wanted to resolve war with peace, but without having an understanding of where the wars were coming from. Why does the war economy keep increasing? The United States, for example, spent about 50 percent more on the military this year than at the height of the Cold War and Vietnam War. The world as a whole spends about 2 percent of its total income on its military; the United States, about 4 percent. Why is it that the countries that comprise the UN Security Council are also the top weapons and military arms dealers in the world? It is very clear for me now that we will not see peace in the world until we answer these questions.

Now comes the elephant in the room. Put briefly, 93% of all the nuclear weapons in the world are in hands of the US and Russia. The US spends one trillion dollars a year on the military, as much as the next 10 nations combined—three to five times as much as China (depending on how you count) and seven to nine times as much as Russia. The United States maintains nearly 800 military bases in more than 70 countries and territories abroad. Britain, France and Russia, by contrast, have about 30 foreign bases combined. The Pentagon’s top 100 contractors raked in $175.1 billion in obligated contracts in 2015. Lockheed Martin was the largest single contractor for the US government in 2015, easily leading the rest of the field with $36.2 billion. The next closest competitor was Boeing at $16.6 billion. To make the situation even worse, the US gives $5.7 billion as Financial Aid to help countries like Israel, Egypt, and Jordan buy weapons (CNN Video). This is the same technique used by drug dealers who want to create a market in a neighborhood: give free drugs to kids and turn them into addicts. The US and its corporation are forcing countries, in one way or an other, to buy weapons. The situation in Eastern Europe with the US base in Romania, the doubling of Poland’s military budget, the military teaching of school kids in Czech Republic, and so on.

Until the US changes the business of war we will not see any peace. There are no ethics in this business, only a bottom line. The only proposal that I can make is to address the problem at its root by making the US war economy unprofitable #WarUnprofitable. We need a universal boycott of all US companies and banks involved in the military business such as Lockheed Martin, Boeing, and Intel. It is the only rationale they will understand. We have to find a way to make the business of war unprofitable.

In the following article we will look at past experiences that have been successful, like the campaign commented on by Jürgen Grässlin at the forum called Action Outcry – Stop weapon exports! in Germany and the worldwide campaign against apartheid in the 90s. The “business” of apartheid in South Africa became unprofitable in part because US students forced their universities to disinvest in companies doing business in South Africa. 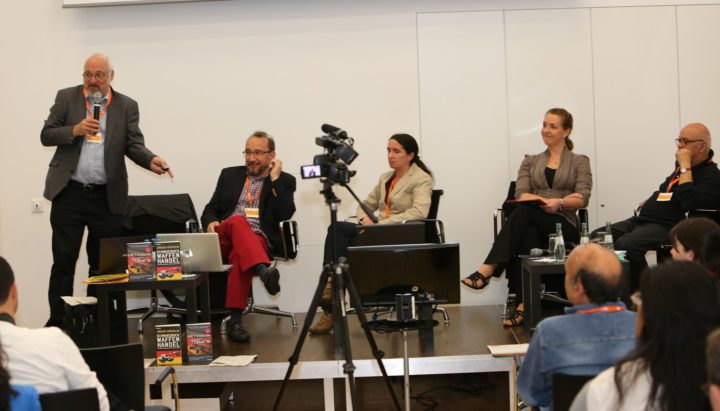