This coming June 5th Switzerland is holding a constitutional referendum on whether to implement basic income policy. Swiss entrepreneur Daniel Häni and German author Philip Kovce have written a book to accompany the referendum. This book is now available in English, and includes a foreword by Twitter investor Albert Wenger: “Voting for Freedom: The 2016 Swiss Referendum on Basic Income: A Milestone in the Advancement of Democracy.”

Switzerland is the first country ever to vote on the implementation of an unconditional basic income. The boundary between those in favor and those opposed runs down the middle of all the familiar camps: Capitalists and socialists, liberals and conservatives, entrepreneurs and unionists either hail this proposal enthusiastically or else they fight against it. The proposal creates new alliances and causes old ones to fall apart. The reason: Unconditional basic income asks the right questions. Daniel Häni and Philip Kovce formulate these questions and precisely work out why the Swiss referendum on basic income is a milestone in the advancement of democracy.

From the foreword by Albert Wenger

“In this important book, Daniel Häni and Philip Kovce explore the many questions that we have to answer so that we can become comfortable and embrace the future that is now possible. They discuss a proposal known as basic income, which separates work from the need to earn a living by paying everyone a guaranteed amount. With basic income people can choose freely how to spend their time. Basic income turns more automation from a threat to people’s livelihood to a promise of a freer future.”

“Switzerland will be doing something quite meaningful if it implements unconditional basic income.”
Joseph E. Stiglitz, economist

“If you are serious about freedom, if you want real freedom for all, then you must argue and fight for an unconditional basic income.”
Philippe Van Parijs, philosopher

“We need people like these initiators who rethink the matter from the ground up.”
Adolf Muschg, author

“Whoever reads this book knows that unconditional basic income is closer than ever.”
Götz W. Werner, entrepreneur 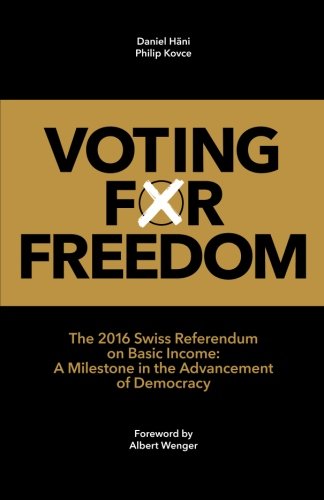 Daniel Häni und Philip Kovce – Voting for Freedom
The 2016 Swiss Referendum on Basic Income: A Milestone in the Advancement of Democracy