Water scarcity and contamination has been recognised as a serious problem for many years. It kills people, starts wars and drives unspeakable inequality. Corporations steal water from unprotected people to produce expensive drinks or mine polluting coal.
The UN has a number of water projects, but it appears that some recently developed simple and cheap new technologies do not attract the same funding as the most expensive and sophisticated ones favoured by the big names.
Here are just some examples worth mentioning:

“This Tower pulls drinking water out of thin air

“Designer Arturo Vittori says his invention can provide remote villages with more than 25 gallons of clean drinking water per day… a new product called Warka Water, an inexpensive, easily-assembled structure that extracts gallons of fresh water from the air. The invention from Arturo Vittori, an industrial designer, and his colleague Andreas Vogler doesn’t involve complicated gadgetry or feats of engineering, but instead relies on basic elements like shape and material and the ways in which they work together.”
At a cost of just US$500 is being installed in arid areas of Ethiopia extracting water from the atmosphere through condensation.

Calvin Rieder, a young innovator from Ontario, has also developed a system to collect condensation in a low tech, environment-friendly and affordable way. From the World Water Day website:

“Providing Water from the Sun & Air”
“Seven years ago, Calvin Rieder learned the scale of the world’s water challenges. He decided to take it on himself to try and contribute to the solution. Using two abundant resources – the sun and our atmosphere – he has designed simple tools that can generate and clean water for those who need it most. Watch his video to learn more about his efforts.”

Boiling water to make it safe 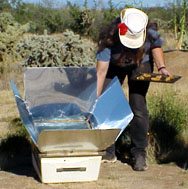 Solar cooking has a long history but the use of low-tech and cheap solar over now has allowed many rural communities to boil their water to reduce illnesses such as infantile diarrhoea and dangerous parasitic infections.

Considering the obscene amount of money used in military campaigns that make the world unsafe and dehumanised, a little attention paid to these life saving rather that life destroying projects can change the direction of people’s thinking and connection between human beings.