It was an historic day at the International Court of Justice (ICJ), as oral arguments in the first-ever contentious cases on nuclear disarmament began at the ICJ. The Republic of the Marshall Islands (RMI) argued strongly in favor of the ICJ holding jurisdiction in the case that the RMI has brought against India.

Tony de Brum, co-agent of the RMI and former foreign minister, opened the arguments with a strong statement explaining why the case is before the ICJ. He said, “We are here in peace, and our goal is no smaller than to obtain the required negotiations in good faith for nuclear disarmament.”

Mr. de Brum went on to describe his personal experience as a witness to many of the 67 U.S. nuclear tests that were conducted in the Marshall Islands from 1946-58. He then told the court:

“To be clear, while these experiences give us a unique perspective that we never requested, they are not the basis of this dispute. But they do help explain why a country of our size and limited resources would risk bringing a case such as this regarding an enormous, nuclear-armed state such as India, and its breach of customary international law with respect to negotiations for nuclear disarmament and an end to the nuclear arms race.”

India has raised objections with the ICJ that the Court does not have jurisdiction in this case for a number of reasons. The RMI legal team addressed India’s objections and argued effectively against them. 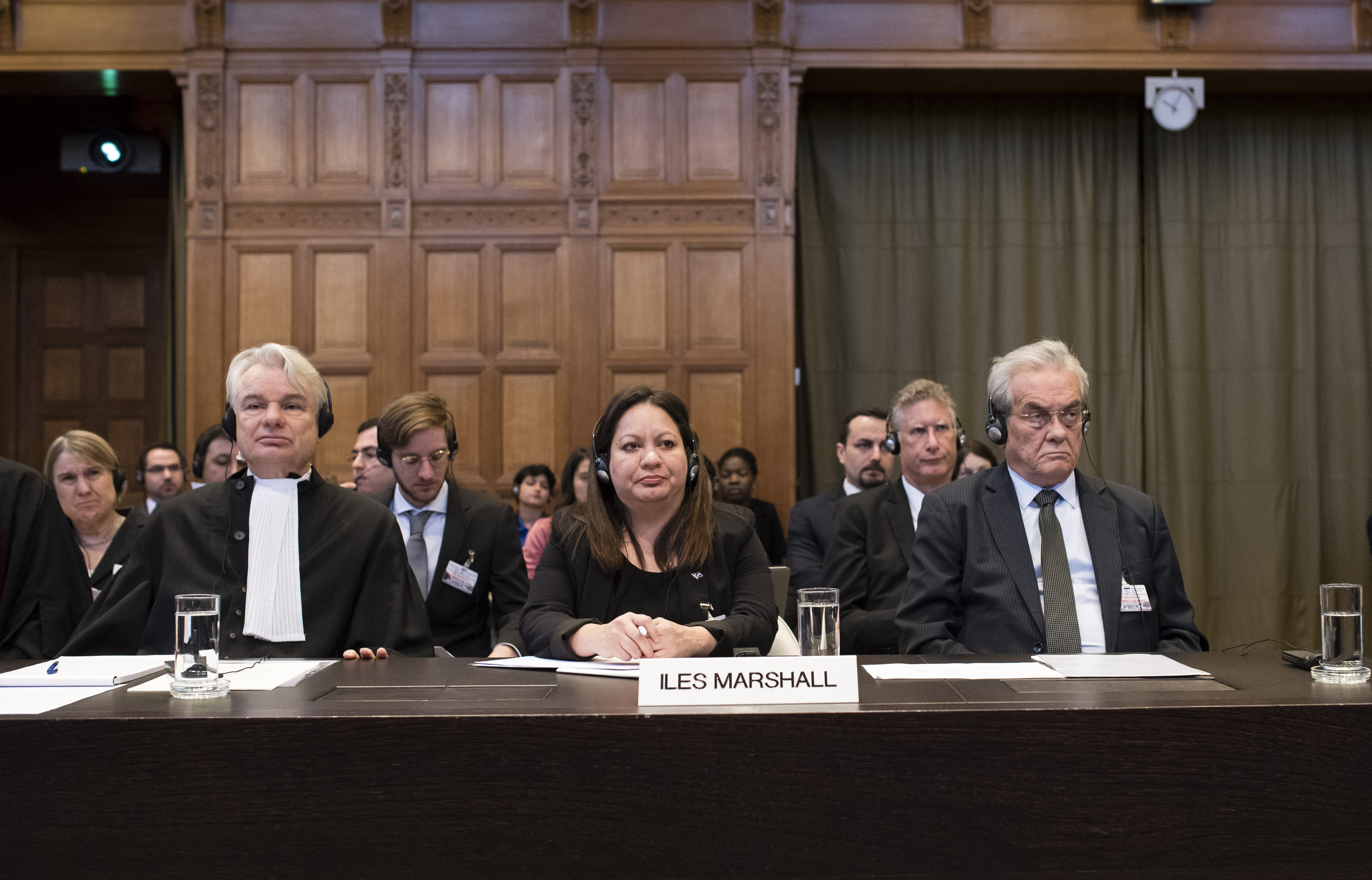 The International Court of Justice (ICJ, principal judicial organ of the UN), holds hearings from 7-16 March 2016 in three distinct cases filed by the Republic of the Marshall Islands against India, Pakistan and the United Kingdom, with regard to Obligations concerning Negotiations relating to Cessation of the Nuclear Arms Race and to Nuclear Disarmament (hearings on preliminary arguments exclusively).

Nicholas Grief, a member of the RMI legal team and professor of international law at the University of Kent in the UK, explained why India has an obligation under customary international law to negotiate in good faith for nuclear disarmament. In particular, Professor Grief explained that the Court had recognized this customary obligation in its 1996 Advisory Opinion and that the UN General Assembly and Security Council had both contributed to the rule’s development. He recalled that the Court itself had referred to the very first General Assembly resolution, adopted unanimously in 1946, as the starting point for nuclear disarmament as an international norm. Among many other legal arguments, Grief also cited a 2009 UN Security Council resolution which calls upon “the parties to the NPT, pursuant to Article VI of the Treaty, to undertake to pursue negotiations in good faith on effective measures relating to nuclear arms reduction and disarmament,” and calls upon “all other states to join in this endeavor.”

In February 2014, India stated at the Second Conference on the Humanitarian Impact of Nuclear Weapons, “We cannot accept the logic that a few nations have the right to pursue their security by threatening the survival of mankind. It is not only those who live by the nuclear sword who, by design or default, shall one day perish by it.”

The Marshall Islands, by bringing these lawsuits against India and the other nuclear-armed nations to the ICJ, seeks a peaceful resolution for the benefit of all humankind.

The ICJ oral hearings continue tomorrow at 10:00 am CET, with the RMI presenting arguments in its case against Pakistan.

Rick Wayman is Director of Programs at the Nuclear Age Peace Foundation, a consultant to the Republic of the Marshall Islands. He is tweeting about the ICJ hearings at @rickwayman.

Nuclear Age Peace Foundation
To educate and advocate for peace and a world free of nuclear weapons and to empower peace leaders.