by Stuart A. Goldman

The NSU Museum Ft. Lauderdale, claims to be the first exhibition exploring avant-garde art influence on the look and content of early network television. Actually, part of the exhibit was on display earlier this year at the Jewish Museum in Manhattan, focused on CBS-TV’s pioneering staging and graphic design in the early years of television. At NSU, Revolution of the Eye takes a broader look at how the new mid-century medium of television created images and themes that would influence all mass media for decades.

Just before WWII, there were no less than 70 television manufacturers with names like Paramount, DuMont and RCA, all envisioning a vast marketplace for a magical device that married images and sound. But it would still be a decade before the first commercial broadcasts, due to the War effort, but also because the FCC needed to decide on a technical standard for the medium. By 1947, when there were 40 million radios in the U.S., but only about 44,000 television sets with most in the New York area. Regular network television broadcasts began on NBC (a three-station network linking New York with the Capital District and Philadelphia in 1944); on the DuMont Network in 1946, and on CBS and ABC in 1948. 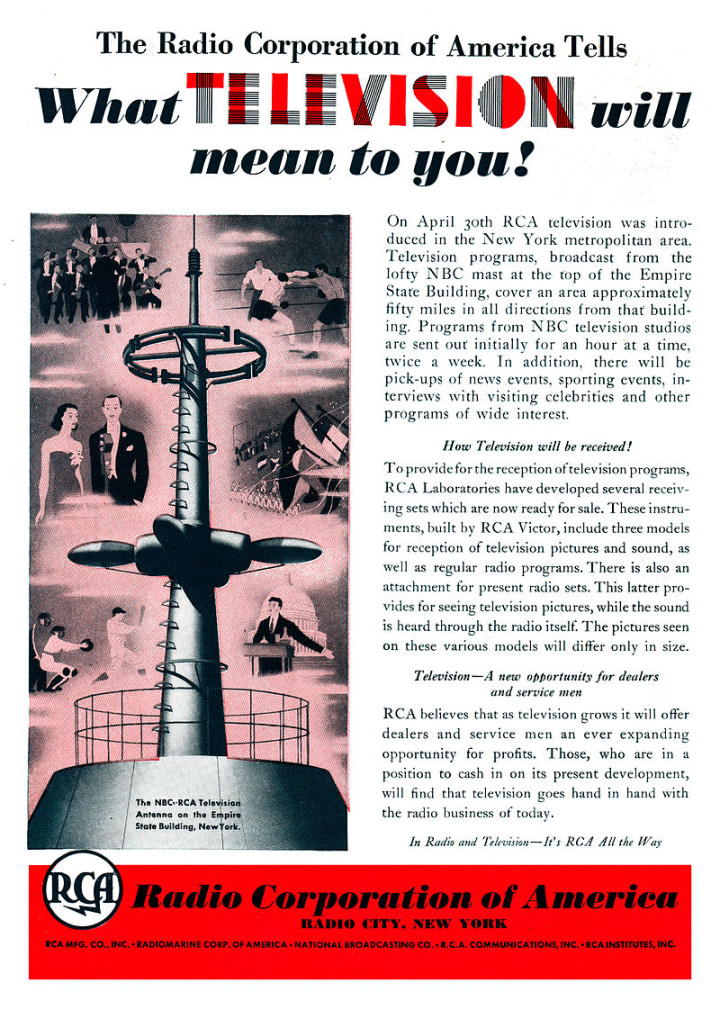 During the late 1940s up to the mid-1970s, in creating a look and feel for the exploding medium, America’s TV networks drew from from modern art and artists. Many examples are featured in the NSU exhibit, including over 260 fine art objects and graphic design; works by Saul Bass, Marcel Duchamp, Roy Lichtenstein, Agnes Martin, Georgia O’Keeffe and Andy Warhol, Frank Stella, Robert Morris, and Bob Kane, among others, as well as ephemera, television memorabilia and clips from historic television programs and film, including Batman, The Ed Sullivan Show, The Ernie Kovacs Show, Rowan and Martin’s Laugh-In, and The Twilight Zone.

Anyone familiar with the history of broadcasting and CBS, is aware of the CIA’s significant influence on the network, thanks to the cooperation of William Paley, head of the network at that time (and Deputy in Chief of Psychological Warfare during WWII). Making use of abstract expressionism, CBS more than any other network intertwined subtle symbolism in its everyday graphics and images. But the dark aspect back then was the CIA influence on CBS news at that time, controlling what was broadcast and what was edited out of the news. CBS was unquestionably “the CIA’s most valuable broadcasting asset” according to Carl Bernstein’s 1977 Rolling Stone expose on the network and government interference.
Despite this unfortunate collaboration, CBS graphics, visuals and set design remain outstanding examples of the early days of TV. Revolution of the Eye features the progressive design campaign of the CBS Television Network as one of the most esteemed of any American corporation. And there are many more examples of art and design from the other three networks of the era, who seemed to find CBS a shining influence.

Stuart A. Goldman is a TV producer and writer in New York.
Images courtesy of NSU Museum, Ft. Lauderdale.