“On May 19th, after traveling thousands of miles to reach North Korea, our international group of women arrived in Pyongyang in preparation for our walk on Sunday across the Demilitarized Zone into South Korea. This group is passionate and diverse, and our meetings often break into laughter, hugs, and even tears. The women have been doing the heartwork of peace for most of their lives.”

Join the conversation by signing up for our Twitter Thunderclap!
We’ve learned so much about Korea and the brutal war that separated millions of families and created the world’s most heavily fortified border. We learned thatSouth Korea wasn’t even a signatory to the 1953 Armistice Agreement (a ceasefire, not a peace treaty) that ended the war. It was, in fact, signed between North Korea, China, and the US-led United Nations Command. The lines drawn on the 38th parallel separating the North from the South were determined by American diplomats who were not experts on Korea, and who even recognized the division “made no sense economically or geographically.”
And now, as we approach the days just before our walk across the DMZ, we’re witnessing first-hand the political stalemate here – why nothing moves, why there’s no peace. Despite permission from North Korea, United Nations authorities have announced they can’t guarantee our safety if we walk across the DMZ at the Panmunjom border. Panmunjom is where the Korean War armistice agreement was signed, and it is important to the Korean women we are here to support that the DMZ crossing take place at this symbolic site.
There’s an astounding lack of communication here: North and South Korea don’t talk to each other, the US and the UN aren’t responding to our request. Everybody throws the hot potato back and forth, and nobody wants to take responsibility. Families are suffering, but instead of peace, North and South Korea continue to build up arms in fear of each other. This has lasted over 63 years, which is why we women must walk.
We are dismayed that General Curtis Scaparrotti, the commanding officer of US Forces in Korea and the UN Command, has failed to use his jurisdiction over the Joint Security Area to ensure cooperation as we cross the DMZ at Panmunjom. We have come here at the behest of our Korean sisters and because we care deeply about peace in Korea. Why does the US military not want to support all efforts for peace? 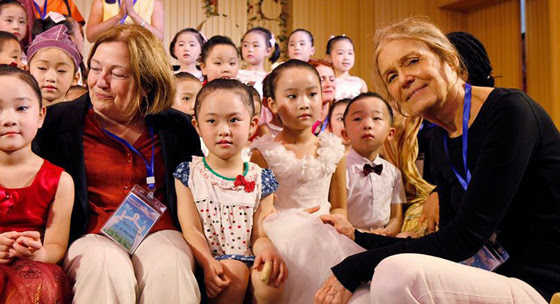 We WILL cross the DMZ on Sunday, but we want to do everything we can, where we can, and cross where it means the most to the women we are with from North and South Korea.
Women lead to peace,
Jodie Evans, Medea Benjamin & Ann Wright
See also:
http://www.pressenza.com/2015/05/korea-un-political-peace-conference-needed/
Footnote by the editor: Not allowed to walk the proposed walk the women were bussed from North to South Korea but no matter, they did a great job and much was accomplished.

Media report: South Korean immigration officials insisted that a group of 30 international women, including American feminist pioneer Gloria Steinem and two Nobel Prize laureates, take a ride across the border for their own safety. Still, Steinem said, just getting agreement to cross at all — from two nations still technically at war — counts as a win. “It was an enormous, enormous triumph,” Steinem said, after crossing into the South Korean side of the demilitarized zone.