March 28, 2015 – First, let me thank you for being here and for traveling to this beautiful part of New York State. We are here at the Hudson Valley Park of Study and Reflection between Kingston and New Paltz. This place has been created for studying and reflecting about the human being and also to host this type of event, providing a social space to connect, develop ourselves, and transform the world around us. We count more than 50 parks around the world on five continents, with thousands of people engaged in building a culture of nonviolence.

In New York we, the Humanists, have been working in many fronts and for many years. Back in 2000, some of us can recall the campaign to gain TPS for Colombians, the English Conversation Clubs, followed later with the opening of the Diversity Center of Queens in 2007 and the Humanist Party assuming coordination of the New York Coalition to Expand Voting Rights. You may have seen, this week, that there was got some press coverage of the possible introduction of the legislation that would grant the right to vote for legal residents in municipal elections. We need your help with this campaign — but that is another subject.

Today we are here to discuss the peace process in Colombia. This peace process can already count many victories. The violence has diminished, many people are returning, and, most importantly, people are seeing a future for themselves and their families in Colombia. For many years now, something happened into the head of Colombians, something very special that doesn’t happen very often in society. People connect with something deeper, something non-rational, people start to see the need for peace and nonviolence for themselves and for the country at large.

Let me give you an example: the Humanists at the International level organized a March for Peace and Nonviolence that started on Oct 2, 2009 and finished Jan 1, 2010, recovering 93 countries. Of all the places the March visited, Colombia was the site with the most potent activities, energy and social enthusiasm. The March had a daily newscast in Caracol, went with Juanes to the Ecuadorian border, and had marches in small towns and villages where everyone took part. You will see later in the program a video (Isabelle Bourgeois and Antonio Navarro) that will illustrate the profound connection to reconciliation that was already present in Colombia in 2009.

This is what we want to capture here today, we want to review what happened to us during this past 30, 20, 10 years and what we wish for our future and the future of our societies. I really want to emphasize this important point, that this type of change, at that scale, always comes from people’s deepest aspirations which surface to the world. We saw it here in the US many times; the Civil Rights Movement was a very clear moment when people had a different vision of the future than the one maintained by the established society, and I think Colombia for the past five years is also going in a different direction. The Colombians are building something very interesting: united people, overcoming difficulties, opening new doors, finding solutions to enormous problems, breaking political barriers. The discussions at Havana are a very good example of that new direction. The talks are adding more people and diversifying the issues every day. For example, just last month the U.S. State Department announced that it will send a representative to the peace talks. 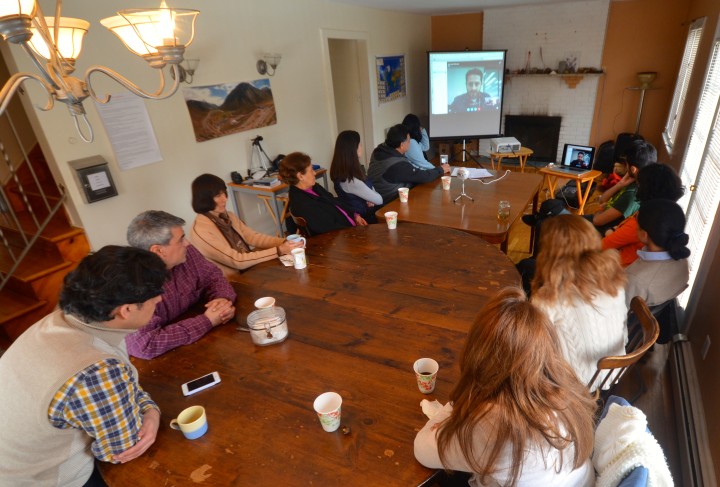 Skype with our friend Juan Carlos Villamizar in Colombia

Now we are going to hear from our friend Juan Carlos Villamizar, who went back to live in Colombia. Juan is part of the International Forum of the Victims and will give us an overview of the relations between the Colombians living outside the country.

I just want to conclude by quoting a phrase from a talk of Silo call “The Healing of Suffering,” given on May 4, 1969 in Punta de Vacas, Mendoza, Argentina.