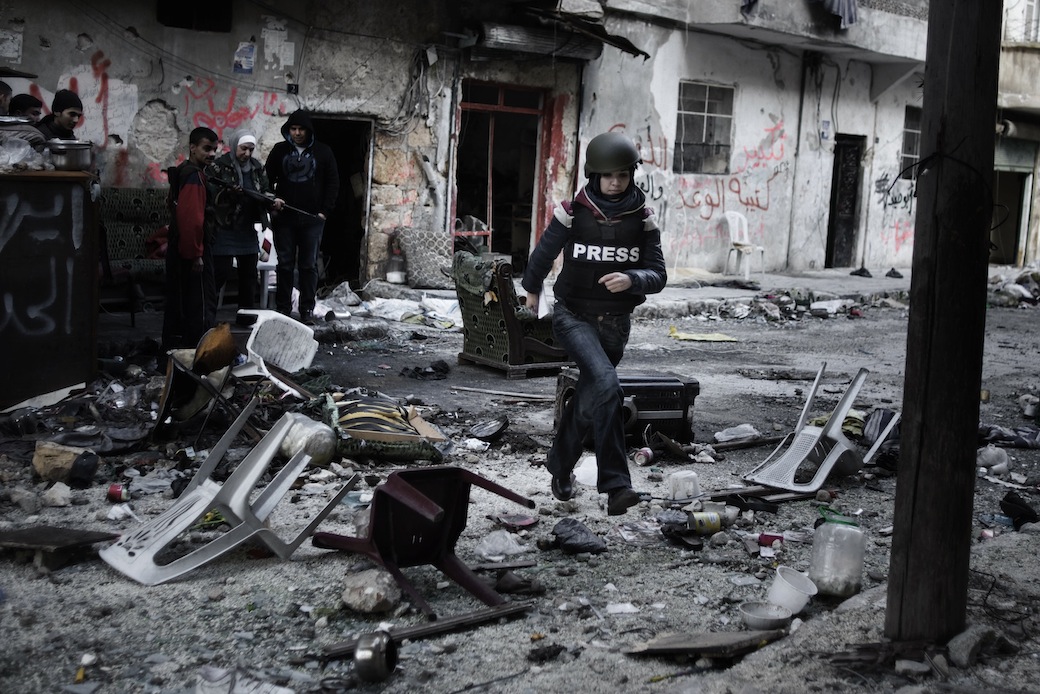 We started to cover Syria, it was February 2012, because we believed a red line had been crossed: demonstrations against Assad were being swept away by bullets and mortar fire. But confrontation between the regime and the newborn Free Army, just a bunch of youths with a kalashnikov and flip-flops, soon deteriorated: and we found ourselves beyond another red line, that of full-fledged war. Street by street, wildly; meter by meter. Soon the dead began to pile up by the hundreds, by the thousands. And we started to warn newsrooms: ring us before printing, we’ll update figures. Then, suddenly, the first foreign fighters appeared. And it looked to us like another red line: that of Syria held hostage by others’ struggles, others’ strategies. Until Scud missiles started to rain down upon us. Until we saw the Free Army HQ, in Aleppo, replaced by the HQ of Jabhat al-Nusra, the al-Qaeda-linked Islamists. Until the day we met Syrians thinner and thinner, yellow skined, used up by hunger and thypus fever – while we no longer recorded the number of the dead, so many were those nobody recovered from under the rubble.

We had filed the last red line just one month ago: two children shot for a statement made against Islam. Because the truth is that the only red line, in Syria, is the wake of the flesh and blood of the wounded, of their pieces dragged away in the dust: when following missiles, following mortars, snipers’ turn comes, and rescuers are the target.

As usual, analyses and views on the chemical attack that on August 21st, in Eastern Damascus, asphyxiated hundreds of Syrians, oppose each other. What was the point for the regime?, Assad’s defenders ask. After the fall of Qusayr, and the open backing by Hizbullah, Assad was gaining the upper hand: why offer the US the pretext for intervention, and precisely at the same time when UN inspectors were in Damascus? In Damascus, moreover, to investigate on another chemical attack: the one in the Aleppo countryside, on March 13th, whose major suspects are the rebels. In this way, it is argued, they succeded to divert international attention elsewhere. In the targeted area, however, the regime was in trouble, Assad’s opponents reply. And most of all, as US wiretappings seem to confirm, we think of Assad as holding an iron grip over what’s going on, even as he has admitted this is not true: over the last years the regime, it’s well known, has been flaking off. With Bashar more and more flanked, sieged, by numerous power players. And so the chemical attack might have been carried out without an agreement of the regime’s top layers, or ordered by top layers rivalling Bashar – for example his brother Maher. But to be honest: does it really make any decisive difference to identify the guilty party? Has still anybody any doubt that the regime is carrying out crimes against humanity, and the rebels war crimes? Because there is another red line we have crossed, months ago: when Syrians started to flee not only regime-held areas, but also the so-called liberated areas, plundered by an anarchy of sacks, executions, kidnappings, and makeshift sharia courts.

Does it really matter if you are killed by chemical or conventional weapons? More than 100,000 dead: it’s time to act, in Syria – the father of my friend Fahdi, Alawi, who died in Latakia because of lack of treatment, did he die of cancer or war? Only, as Antonio Cassese, the jurist we owe international criminal tribunals, used to say quoting Mark Twain, there is always an easy solution to complex problems: the wrong one.

Many comments, in these hours, refer to the Kosovo precedent. The only analogy with those 78 days of airstrikes, however, it was 1999, lies in the Russian veto, that now as then stalls the UN and their Security Council. Besides that, the context differs totally. The polarity between an Albanian majority and a Serb minority was nothing compared to the maze of diversity, the plurality of stake-holders that is today Syria: the key issue, here, is that the opposition is heterogeneous and fragmented, with Islamists as the leading group. What the airstrikes’ objective would be, therefore, since the true reason behind international inertia is not the Russian veto, but rather the lack of any feasible alternative to Assad? The Kosovo war ended with a years-long UN administration. As general Wesley Clark, NATO commander at the time, reminded us, it was the opposite of a shock and awe operation, of two days of airstrikes like those we are planning. In every war, he warned, you must have a clear political objective, and most of all, you must be ready for escalation – exactly what happened in Kosovo: two days that turned into 78, until Milosevic surrendered. Only, today the context of such a potential escalation is not Yugoslavia: it is a Middle East where wherever you look, it’s a coup, a drone, a car bomb – I am writing from Ramallah, currently one of the most anesthetized cities, here: and yet, three Palestinians were killed, a few days ago, and in one minute the entire West Bank was on fire.

There is a wide understanding of this intervention as a kind of defense of the credibility of the West: that resorting to chemical weapons cannot go unpunished. There seems to be no break, however, with our role in Syria up to now. Because of course, it’s definitely untrue that we were absent: up to now, our strategy has been to supply rebels with arms and money, but not too much, not all the way: only until the point of removing Assad through a transition that keeps together reforms and stability – especially stability: that very stability that despite any rhetoric has been presiding Israel’s safest border. Only, our strategy didn’t work: because opposition proved to be a disaster, because al-Qaeda fighters landed in the thousands, because Assad opted for razing Syria to the ground rather than give up. Nothing new, therefore. In spite of appearance, the coming airstrikes are but another “yes, but maybe no” that doesn’t answer the key question: What is the alternative to Assad? One makes refugees one million children, the others shoot at children.

As for the credibility argument – chemical weapons, prohibited under customary international law, were excluded from the jurisdiction of the International Criminal Court. For they form one category, that is, weapons of mass destruction, together with biological weapons, and most of all, nuclear weapons – whose masters are well known. And so, we are here outraged because of a red line we didn’t classify as a war crime in order to be free to cross it.