The citizens of Madrid responded massively to the demonstration against the privatisation policies of the regional government.

More images of the mobilisation on this link

Attendance at the demonstration for Public Health on Sunday 13 November has exceeded the forecasts of the organising groups and has overflowed the streets of Madrid, the result of a health rebellion against the privatisation measures of the government of Isabel Díaz Ayuso. The Government Delegation has put the attendance at more than 200,000 people, while the organisers put the figure upward to 670,000 people.

The hasty and chaotic opening of the new Continuous Care Points (PAC) without sufficient staff, as 80 PACs were deployed with the staff of the 40 defunct Rural Care Services (SAR), has led to an indefinite strike called by the medical union AMYTS, in addition to the stoppages promoted by the SUMMAT and MATS unions for all PAC staff at weekends and the resignations of doctors. At the same time, the preoccupation among the public has escalated to the point where the initial forecasts for this Sunday’s demonstration have been overturned.

Added to this is the abandonment of senior leaders of the Regional Ministry of Health upon learning of the new plans for out-of-hospital emergencies. 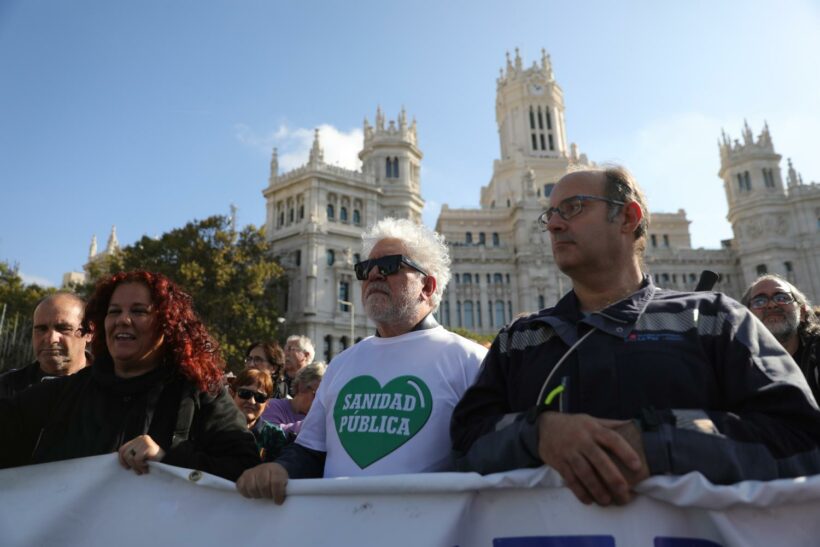 Pedro Almodóvar at the march for public health. The organisation highlights as key the call of actors and actresses to support the march in the last two weeks. DAVID F. SABADELL

All this explains the massive response from the public this Sunday. After 12.30 p.m., leaving Atocha station to go to the march was practically impossible, reports Susana Albarrán, from El Salto Madrid. The four columns that would head towards Cibeles from Nuevos Ministerios, Ópera, Hospital de la Princesa and Atocha have converged on Paseo del Prado demonstrating the repulsion of the people of Madrid to the health management of their president.

White scarves, slogans for public health and calls for Ayuso’s resignation were some of the messages. Before the reading of the manifesto, there was a special remembrance for the elderly people who have died in the residences of the Community of Madrid. “They are not deaths, they are murders”, chanted the attendees to show their indignation at the protocols that were signed between 18 and 25 March and which established the criteria for not carrying out these transfers based on their physical or cognitive abilities. 7,291 elderly people perished inside nursing homes without being transferred to hospital. 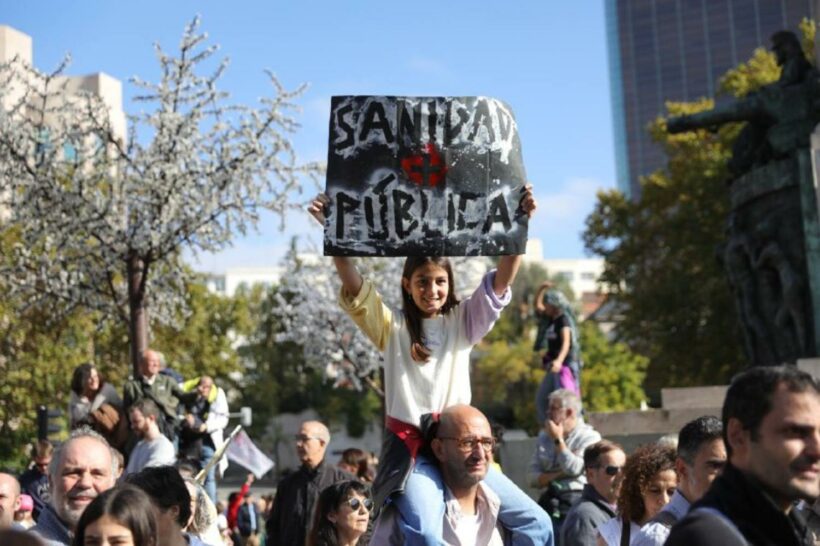 A girl holds a banner for public health care during the demonstration in Madrid.DAVID F. SABADELL

From the stage where the demands were made, Lola Barquero pointed out that it is women who are the main carers and companions in health-related matters. “The unfair distribution of care tasks means that women suffer the shortcomings of primary care”, she said, to highlight the value of the role of local care provided by primary care clinics. Barquero reminded all the women who make health care possible, such as the caretakers and cleaners, who share with many other women the consequences of precariousness.

After, Rebeca, a persistent covid patient, took the floor. “Trying to recover your health cannot depend on whether you have enough money”, which in Madrid affects more than 200,000 people, she said, with up to 200 different symptoms that become chronic and cannot be cured. 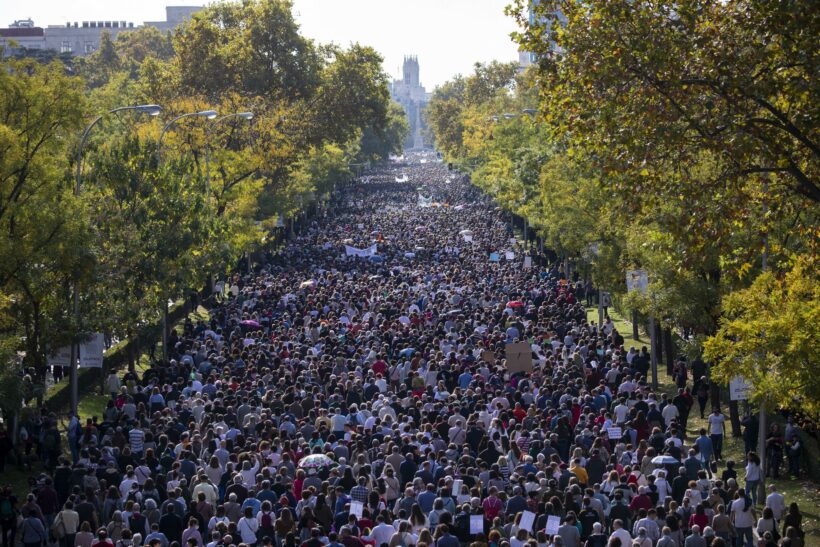 The response from the public has been massive. DAVID F. SABADELL

Antonio Cabrera, from CC OO, pointed out that one of the consequences of the pandemic is the need for mental health care, in the face of a lack of resources and adequate policies. Icíar Valero, a worker in the Rural Care Service (SAR), described the situation of rural emergencies and was very critical of the regional government’s plan to implement telecare.

The organisation recalled Mar Noguerol, a doctor who was reprimanded after recording a video of a protest in her health centre. There was also a warning about the exclusion of migrants from healthcare: the healthcare that citizens have demanded is universal and no one should be deprived of it.

“This is historic”, said the organisation before the march ended, giving way to the Solfónica. 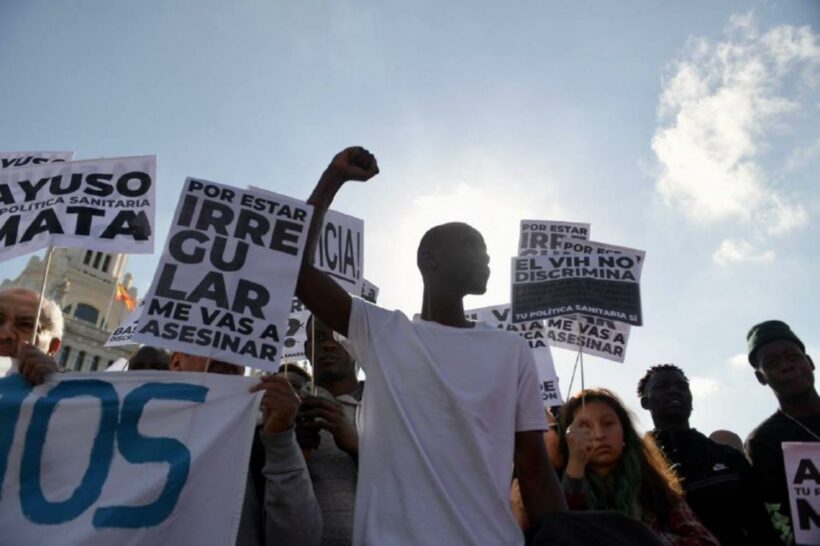