Who is Hebe Bonafini? First and foremost a housewife who gave birth to herself, after the disappearance of her children during the dictatorship of 1976. She was not a leader, nor a civil servant, nor did she have postgraduate degrees at UBA or Harvard, she was a housewife like any “ordinary” woman who one day, faced with a tragic and unjust circumstance in life, had two options: to succumb or to give birth to herself in order to survive and seek justice. In 2008, in her workshops “Cooking politics” in Ecunhi, she taught economic culinary recipes to alleviate the economic situation and, at the same time, she debated and politically educated other women, that was Hebe.

Her life shows us that the great leaders who achieve great concrete changes in the lives of people in their time, and leave legacies of struggle for the next generations, almost never leave universities or academies, which are certainly Eurocentric in Latin America. Because it is not possible to know, to relate the problems and the pain of the people, and much less to fight against it, from desks or closed circles of “know-it-alls” who, far from the warmth of the people, try to lower the line or lead the “ignorant” people.

In the midst of the dictatorship in 1976, a group of housewives got together, many of them pointed out that, until then, they had never spoken about politics, they were all mothers looking for their disappeared children, and in the face of pain and injustice, they founded “Mothers of Plaza de Mayo”, an association with a world-renowned seal of resistance and struggle. An Argentinean seal of the size of the Maradona seal, because Hebe became an emblem of the D.D.H.R.H. and of Memory, Truth and Justice before the world.

The Mothers of Plaza de Mayo Association not only promoted the trials of the military juntas, but also tried to continue what these mothers saw as the continuation of the struggle and ideals that their children had tried to carry out. Thus, a radio station, a TV programme, a popular university, a literary café, a housing plan, political formation courses, workshops, etc. were promoted.

Hebe Bonafini has the stature in my country, Bolivia, of the indigenous leader Domitila Barrios, a woman who, in 1978, was secretary general of the “Housewives’ Committee of the 20th Century Mining District”, and was part of the hunger strike led by four women who overthrew the bloody dictatorship of Hugo Banzer. Therefore, the one who flies away is an irreplaceable woman who made history, who wrote not only the history of Argentina, but of Latin America, a true heroine of Abya Yala.

She says goodbye through the big door, coherent because she lived as she thought, a woman of courage hated by the most conservative sectors of society, but also, it must be said, by the cowards and the lukewarm of the colonial left and misguided progressivism. e confronted the most powerful people in the country, politicians, judges, businessmen, military, police chiefs, etc., and called them by name and surname.

She was 93 years old and continued to march in the Plaza de Mayo, every Thursday at 3 p.m. without giving up, ever since his children disappeared during the dictatorship of 1976 in Argentina. She continued to set the agenda of the Argentinean people, and of the peoples of Latin America, rightly and concretely. In times when the Eurocentric lefts or progressivism are in ideological crisis and their actions go one way and their speeches the other, she remained coherent.

Hebe was a visionary, a woman who anticipated the time in which she lived because as a woman she never asked for permission, neither in dictatorship when she fought, nor in democracy when she continued to fight. She broke gender stereotypes and the respect of age, of old age, with 93 years she marched the Plaza de Mayo, she gave speeches unsurpassed in their power, she continued to set the agenda of the Argentine people, I do not mean the middle classes, the same one that in Bolivia was part of the coup of 2019, I mean “Los Nadies”. She was very much loved by “Los Nadies” and that is why today the wolves must be celebrating.

The legacy of Hebe Bonafini

If some “leaders”, even those voted for by the people, were to leave today, I believe they would leave behind disappointment and disillusionment, with all that this implies for the young generations, always hopeful and ready to fight. Hebe leaves us the example of having given birth in the face of the worst adversity, and at the same time, having been able to maintain her tenderness, her smile and her great charisma.

She left us democracy, in times when they want us to believe that the democratic system is useless, even with its great flaws and holes, with the aim of bringing back with other faces, the same people who disappeared a generation of Argentines. We live in democracy thanks to a group of women who kicked the Plaza de Mayo during the military dictatorship of 76.

Hebe is an example of a human being because she not only fought for the trial and punishment of those who disappeared her children during the dictatorship of 1976, but she also took up all the struggles of the “nobodies”, the women, the native peoples, sexual diversity, the slum dwellers, etc., and she went for everything. She went deep and visualised the origin of injustices, she fought against a system of colonial, capitalist and patriarchal oppression. She didn’t just point it out, she fought against it and took a gamble.

At that precise moment, Hebe became the mother of all battles, she began to make people uncomfortable and they began to call her “violent” for her ability to point out what lies behind what is invisible to the eye, to reveal the enemy and point out the traitor. They went from calling her “crazy” for denouncing the disappearance of her children during the dictatorship, to “violent” in democracy for denouncing injustices and inequalities, and pointing out those directly responsible for them, that’s what happened.

She leaves us an invaluable human rights capital, built in more than 45 years of resistance and struggle, which is unique in the world. If no country has that, no one has judged the genocides that participated in “Operation Condor” in Latin America. Even in Bolivia, after the coup of 2019, with all the tools on the table and a people who took the risk, today the coup perpetrators are in important political positions.

Hebe’s solidarity with the Bolivian people is well known, she was the first to do so during the conflicts of 2019. And when asked her how long she thought it would take to recover democracy in Bolivia, she replied: “We mothers have been fighting for 45 years”, making it clear that the only struggle that is lost is the one that is abandoned.

Hebe never made a pact with anyone, I remember that she did not even want to receive the economic reparation from the state for her disappeared children to which she was entitled. She leaves us an example of the greatness of a human being, a woman who was a fighter and tireless to the end, who gave birth to herself, who was not afraid, or who certainly had it at some point like anyone else, but that did not paralyse her.

She knew how to give birth to herself, which shows us that even if one is born under certain conditions of class, gender, culture, ethnicity, skin colour, sexuality, etc., through certain painful or tragic circumstances of life, one is capable of giving birth to oneself, reinventing oneself and rising from the ashes, even making history.

Something that characterised Hebe was that anyone could approach her in the Plaza de Mayo, she was not one of those “leaders” who isolate themselves from the people, she never lost that contact, she was always with her people. Thank you, Hebe. 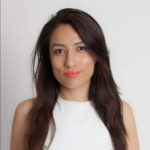