In the disputed territory, the community persecuted by the government and the provincial justice system carried out an ancestral ceremony in front of Lake Mascardi, in an act of spirituality that charges the place from which they were dispossessed with meaning. A moment of connection with the natural forces, while the security forces control the passage through a public space, chasing in vans, with an Argentinean flag in the background where before there was a flag of the native peoples that read: Territorio recuperado (Recovered Territory). “We are convinced that we are going to return to the territory, always opening our hearts,” they say, while four Mapuche women continue to be detained under house arrest, among them the machi who revealed the sacred condition of these lands.

By Francisco Pandolfi for lavaca.org

It is 6.30 in the morning and the day started a long time ago. The meeting point is in front of the Pilar neighbourhood, on Route 40. Mapuche from different communities from Chubut, Neuquén and other parts of the Río Negro are arriving there to carry out an ancestral ceremony. The destination will be the shore of Lake Mascardi, in front of where, until 4 October, the Lafken Winkul Mapu community lived, repressed and evicted by the Unified Command created by the National Security Ministry under the command of Aníbal Fernández, after the raid order issued by Judge Silvana Domínguez.

The entire open-air road is bordered by a hill on the left, and by the mountains of the Andes and three lakes on the right (first Nahuel Huapi, then Gutiérrez and finally Mascardi). The landscapes are marvellous, fascinating. In these cases, one would like to have the gift of borrowing an extra pair of eyes, to take in such immensity and beauty. The trip is accompanied by the yellow broom, an exotic bush that grows along the road and only flowers in November. Behind it, a wide variety of plants and trees, such as coihues, cypresses, lupines, retamos, rosehips and oregon pines. “The Oregon pine is introduced, it’s not from here; it alters the soil and gains territory over the native flora,” says a local woman. She adds: “It’s like the winka”, referring to the invasive white person.

Half an hour afterwards, you arrive at a territory that has nothing to do with what it was a month ago. The sign saying: “Community recovered” is missing. The Mapuche flag is also gone. In its place hangs an Argentine flag. Not a minute after parking, several members of the Federal Police appear. “Comando Unificado”, they introduce themselves. It is explained to them that a ceremony will take place and they go down to the Mascardi. As they walk down, reinforcements arrive from the other three forces that make up the Unified Command: Gendarmerie, Prefecture and the Airport Security Police. In the middle of the ceremony, the officers will say that we all have to give them our details. We are in a public space. We are not in a state of siege. But that is the order. 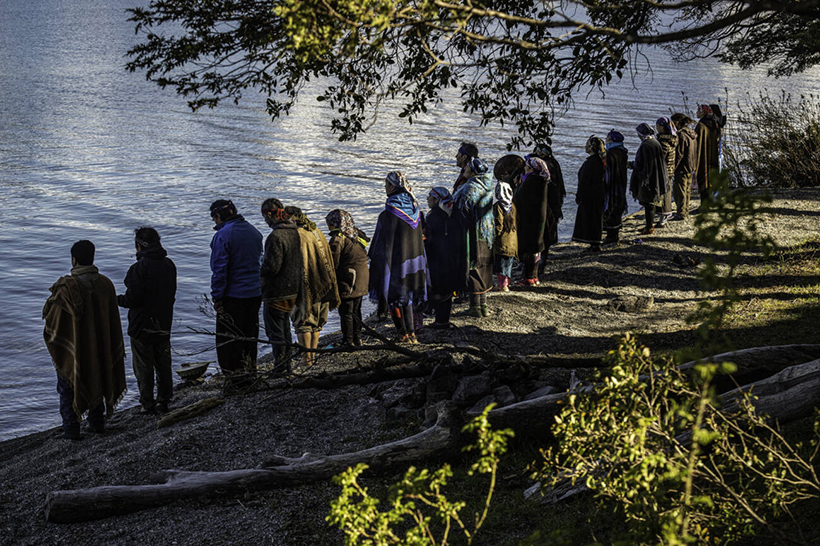 Despite the intimidation, what happens on the shore of the lake is magical, unique, difficult to explain in words: “Today is a day to share what everyone knows, and it is important that we all speak in some way; we have to be calm, calm. Our ancestors fought and that testimony lives on, we are still standing”, they begin, first in a circle, looking into each other’s eyes, listening to each other, seeking “collective harmony”. And celebrating the meeting: “It fills us with emotion to be here, in this place. We have come to strengthen the bush, before the injustices of the winka. We carry so much pain; our bodies know the saddest history. We just want to live in freedom. This place they refer to is a paradise: a forest where you can hear the song of birds such as the bandurrias and the cauquenes; where the Mascardi Lake and the mountain range seem infinite. An area that is more than appetizing for the real estate business, the matrix of a large part of Patagonia, which does not understand spirituality or cosmovision, or respect for cultural diversity. “We are convinced that we are going to return to the territory, always opening our hearts”.

They stop standing in a circle and line up side by side, looking towards the lake and the mountains. The ceremony begins, the guellüpun, as they say in Mapuzugun. Two instruments are played: the Kultrún – a percussion instrument – and the Kull Kull – a cow horn originally used for it to make calls. They sing, play, dance and talk. “Our ancestors passed through here. So, what happens to us spiritually is very strong. The anger we may have for what we are going through is transformed into ways of feeling and thinking. We cannot forget that we are close to the Rewe of the Machi and as she cannot speak, she cannot be in her place, she transmits the force to us so that our words come out on the shore of the lake”. The Rewe is the specific space of connection with other dimensions of space and the Machi is the person who can attend and cure illnesses. It had been more than 100 years since a Machi had stood up in Puel Mapu – Mapuche ancestral territory in what is now known as Argentina. Today, Machi Betiana Colhuan Nahuel is not in her territory because she was evicted, like the rest of her people, and because she is one of the four women still in prison, under house arrest. 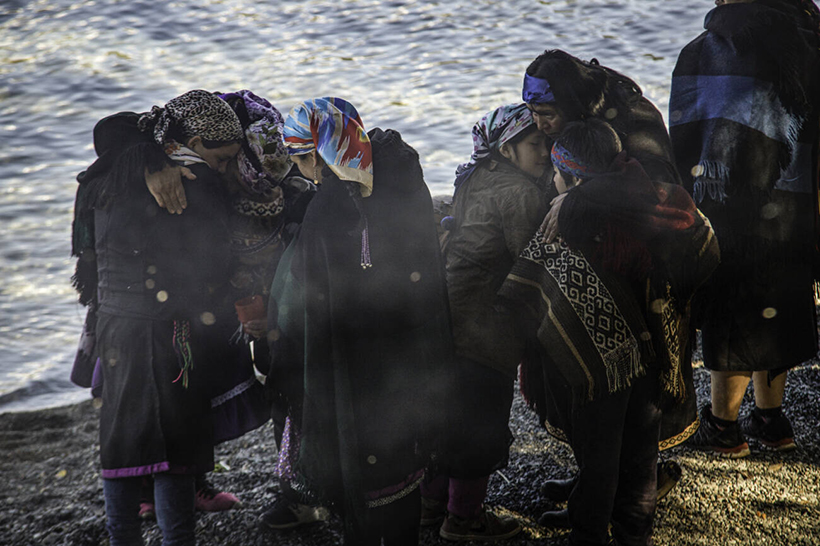 There are children, adolescents, adults. There are several generations that are seen, that are, in one way or another. “And the natural forces that also accompany us”, they express the air, the water, the wind, the fire armed with branches and trunks, among stones that contain, that embrace. There are barefoot Mapuche, resting the soles of their feet directly on the mapu (earth). There is an old woman, a preponderant role in the original communities, who moves to her own rhythm, leaning on a golden cane that goes back and forth, backwards and forwards, to the rhythm of the musical creation.

The pichiche (girls and boys) hand out a bag with seeds. Then, they serve in jars a liquid that has the color of banana liqueur, which is called muday, mushay or muzay, depending on the community. “It’s a wheat drink, like a kind of mote, but not quite because the wheat is not fully cooked,” they say. “The sense, always in the Mapuche ceremonies, is to share, you give to the earth what you harvest or prepare. We do this specifically for the ceremonies and it is the sense of making the guellüpun: a way of giving what you have, in this case the seeds and the drink; it is given so that what we say, what we ask for, comes out better, to talk and share”.

They get even closer to the lake. The sun is shining. They kneel down. They throw the seeds. Each one, each one speaks, asks, denounces, thanks, as needed. An unparalleled music is formed that shakes. Then, they look at the sky and build a shriek, as a whole. A unity in the heterogeneity of tones, of rhythms, of volumes, of what is said. The individual, the collective, the incredible, the everyday: “Our way of looking at the world is integral, it is with all, with everyone. There is the lake, the fire, the mountain, all talking at the same time; an individual, public and collective moment is created; each person engages in a conversation with the forces. It seems strange, doesn’t it? But it happens, it is possible. It is particular, but shared, we accompany each other. We know that many people don’t understand this, but for us it is fundamental to transmit it, because it is our spirituality. 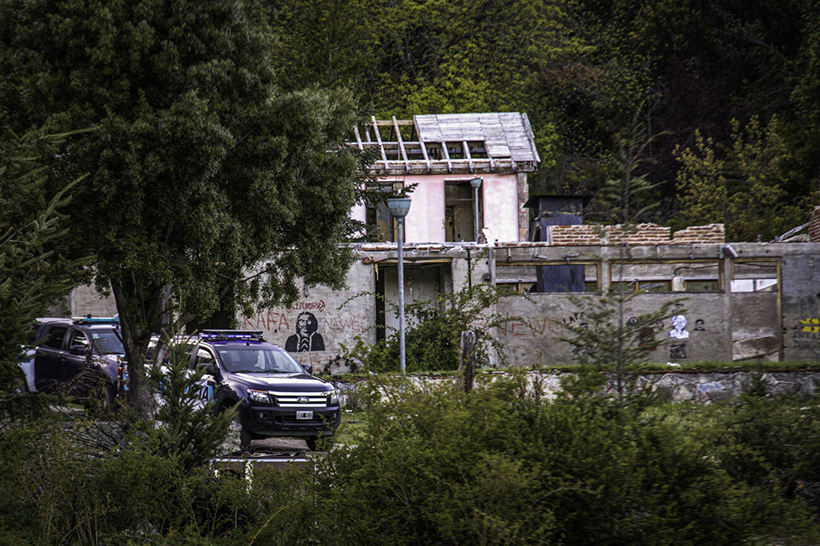 The ceremony ends. Several officers are waiting on the road. And a van of the Federal Police. And another Gendarmerie van. And another Prefectura van. And another van from the Airport Security Police. If there is something that cannot be denied, it is that the Command is Unified. Why the deployment of Forces? “To keep any inconvenience”, says Deputy Flores, who “since this week” is “in charge”. Then, Deputy Flores, without any identification on his jacket, retracts:

“It is to avoid any inconvenience, both on your part, as well as mine, and that the information is not distorted. That’s all. Behind, officer Santana films; he films us. The lavaca photographer asks him why. And officer Santana doesn’t answer her; or he does, actually, because he doesn’t say a word but films her more and more. Now only her.

“Harassment against the Mapuche, against a different way of seeing the world, of understanding the place where we are living, is enhanced; it is not new, we have always suffered this kind of persecution, discrimination, denial, contempt, racism against our people.”

We get into the cars to return the 30 kilometers that separate Villa Mascardi from the city of San Carlos de Bariloche. And the persecution materializes, literally, for a few minutes: a van of the Federal Police begins to chase us, faster and faster, without scruples, with impunity, in broad daylight. At the side, a lamien (woman) says, calmly, when the van slows down on the side of the road and is in the distance: “Everything will be fine, we are doing what we have to do”.