Why were the last federal politicians to take the Russian nuclear threat seriously were Liberal Pierre Elliott Trudeau and Progressive Conservative Douglas Roche?

Why COP27, after years of blockage, will finally consider military environmental damage?

Why did Elizabeth May’s pathetic Green Party kick out of its leadership race any candidate opposed to weapons distributions in Ukraine?

Why Chrystia Freeland and Justin Trudeau prefer to pay billions to NATO?

Why have our mainstream media taken the side of war and censorship, while Pressenza.com, Rabble.ca, l’Aut’Journal & Pressegauche.org take the side of peace?

Artists for Peace choose the Secretary General of the United Nations, the Pope, China, India, the majority of African and South American countries, Pugwash, the Agora of the Inhabitants of the Earth, the Universal Circle of Ambassadors of Peace, Échec à la guerre, Riccardo Petrella, Noam Chomsky and André Jacob who call, unanimously, for negotiations!

Rather than Zelensky, let us listen to the censored wise words of Ukrainian pacifists:

“We condemn official propaganda of extreme and irreconcilable hostility and believe that we should draw from history examples of returning to a peaceful life, not accusations to continue the war. Tragic examples of military brutality must not be used to incite hatred and justify further atrocities; on the contrary, such tragedies should chill the fighting spirit and encourage a persistent search for the least bloody means to end the war. »

Rather than the oil and gas aggressiveness of Minister Fitzgibbon in Québec, we choose the CEO of Hydro-Québec Sophie Brochu and l’Artiste pour la Paix 2020 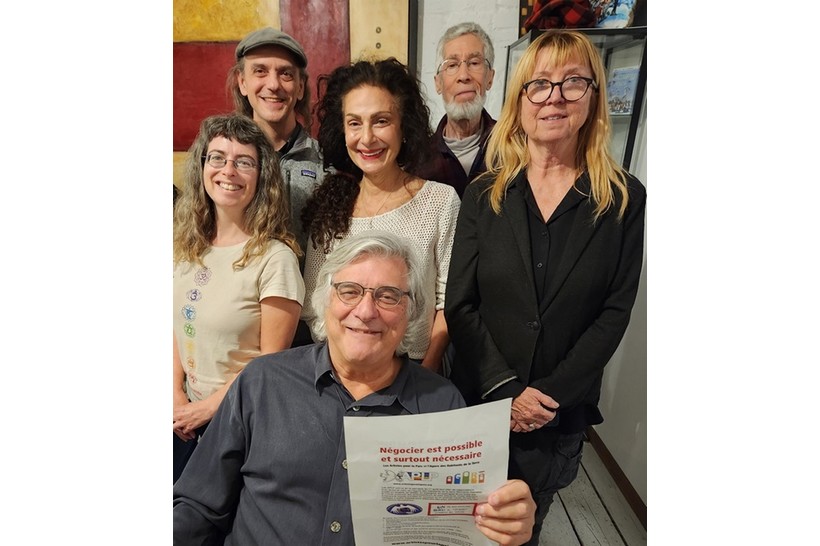 and in front, the secretary general Pierre Jasmin