Childhood observes this world, listens to this life.
What it hears, is it that we would like? What she sees, is it what is right?
From where do children look? From what values would we like them to build this world?
Maybe we would like to give them other images? What would they be?
Or better yet, let them tell us how they want this conversation to be generated.

Do you think this can be done, have you ever tried it?

We have a lot to build on.
In this world where we live in so much violence, is it possible that they look at us, discover us and are willing to listen to us?
We need to find ourselves in a space of compassion, how do we show it to them? How do they feel it? It may not be simple, but I believe it is possible.

Did they listen to you when you were right or did they correct you? Did they look at you the way you wanted and then hug you?

When I look at the world from my child’s point of view, I see something I don’t like. It’s contradictory because I also hear things that I do like.
I think that everything is under construction: there is not something that is right or something that is totally wrong, they are spaces that are unfolding. And me, girl, there in the centre: I discover, I create, I speak, I feel.

You have discovered what you want from your life and now you can exercise it, you can imprint that longed-for music in its interior, I felt how your body dances to it.

I remember when I was a child, how I looked to build my world, but from where did I look, what did I listen to? Why did I choose that way, that model or that form? Why didn’t I see others, why did I feel what I felt, why did I hear only a bell and not its tones?
From where did these ways of being, of feeling, come to me, what models did I choose?
With some of the forms I chose, I have a very bad time, and with others, I don’t. As if they were chained together. As if they were chained to each other, and now I want to change them.

To change something is to change yourself very carefully or as you can, maybe you did it abruptly, maybe with pain or anguish.

You missed something when you looked, some strip of colours, of shapes, of sounds.

What I omitted to see was like covering my eyes. I covered my eyes, but also my ears, so that certain things wouldn’t affect me, or so that I wouldn’t change certain attitudes?
Now I uncover my eyes and I go for everything, like that little girl who had games in which she wasn’t afraid of anything and told herself stories so that in the future she could go down those paths.
I say to myself: Let yourself stop doing, don’t think, let inspiration and creativity guide you, let your usual words be blown away by the wind. Who guides me, who do I guide, how do I become an explorer, on this journey of the new look.

It could be that with an inspired explanation I will catch you so that you will want to talk with me. 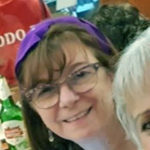