“Don’t worry, I’ll pass on my arachnid powers and you’ll be cured. But you have to believe it. Tomorrow, maybe not. Maybe not the day after, either. But you’ll see how little by little you’ll feel better until you’re cured. Because you’re going to be cured with Spider-man’s powers. You’ll see that you will”, said Spider-man to a child in isolation in a hospital.

No, we are not referring here to Tobey Maguire, Andrew Garfield or Tom Holland, but to an unknown volunteer of the Asociación Superhéoes: Un niño, una sonrisa (Superheroes Association: One Child, One Smile).

Not for profit and not subsidised in any way, this small organisation seeks to combine the heroes of comics and movies with those of real life, i.e., those in hospitals. Their mission? To hang out with the kids (especially those on the oncology ward as that’s where they stay the longest), bring them gifts and give them a special moment. Not to mention the support they give to the parents.

What started with an inspired young man, a friend and two bags full of little gifts, today has approximately 23 volunteers, most of whom get into various superhero costumes to visit every child in the Materno Infantil in Málaga, other hospitals in the Spanish city and private homes that need them. In this way, they make a difference in the childhood of thousands of children who do not usually say things with words. Rather with the illusion in their eyes, their laughter and powerful smile. After all, that is their power, hence the name of the association.

“When you go to a hospital floor, you see a kid who is literally dying. And he is able to look at you, at four little jerks dressed up as superheroes and he laughs, and he is happy, he is content; he gets out of bed and he couldn’t get out of bed 5 minutes earlier. And we get angry because we’re late for work, because there’s a traffic jam, because we have to see what the hell is going to happen. The real superheroes are them. We have to learn from their example”.

At the end of the day, maybe we can add average human beings to the long list of superheroes headed by Kryptionans, super-soldiers, Nordic gods, smashing monsters, smart millionaires, and professional assassins. Wanna help them and make them visible? Check Asociación Superhéroes: Un niño, una sonrisa out here: https://www.unninounasonrisa.com 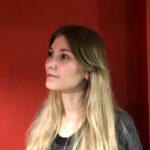 Brune Caggia
Passionate about writing with a BA in Communication. As an aspiring journalist, I'm taking my professional career to the next step by becoming an intern at Pressenza.