A young Italian woman is the latest “street installation” activist to protest the media’s silence regarding the inhumane treatment of Julian Assange by the UK and the U.S. Her installation in a square in Como lambastes the two self-styled democracies for acting exactly like authoritarian regimes.

What is it like to try to live what Julian Assange is living, incarcerated as he is in London’s Belmarsh prison since April 11, 2019 for having had the audacity to make public the secret war crimes, environmental crimes and human rights crimes of the United States and the United Kingdom? A young woman from Como has decided to reenact Assange’s dramatic condition – albeit in the open air and only for a limited time – with a “street installation” in a central square of the Northern Italian town of Como. She hopes that passersbys will be led to put themselves into Julian’s shoes and thus better comprehend the conditions under which he is trying to survive.

It is now well over 1,220 days, in fact, that Assange has been imprisoned, in solitary confinement, in a cell that measures three meters by two (roughly 7 feet by 10 feet),

All this without there ever having been a conviction against him (except for a minor misdemeanor, no longer applicable). An incarceration which is therefore absolutely arbitrary – just like in the worst authoritarian regimes from which the very UK and US claim to distance themselves but, in this case, don’t.

It is a legal monstrosity that cries out for vengeance. And to cry out her rage, the young woman from Como has decided to enact in public what it means to be in a cell like Julian’s.

Every Saturday afternoon for the next eight months, Lorena Corrias will draw on the pavement of Piazza Verdi, in front of Como’s Social Theatre, the outline of a 7X10 foot cell – with a poster of Assange covering a space the size of the Belmarsh cot – and will sit there from 4 to 6 p.m. (during summer), getting up only to distribute leaflets to passersby. The municipality has allowed her to occupy the 64 square feet of city property until March 25, 2023. She began enacting her protest on August 6, wearing for the occasion an orange jumpsuit reminiscent of that worn by prisoners in Guantanamo. (Belmarsh prison is, in fact, often called “the British Guantanamo”.)

Lorena took inspiration for her unusual protest from a young woman in Berlin, Raja Valeska, who, for the past one hundred days, has already been sitting inside a 7X10 foot cell drawn on the pavement in front of the Brandenburg Gate or in front of other busy places in the German capital. The Comité Free Assange Belgium is also carrying out a similar initiative: the Belgian activists are already at their 174th “street installation” in Brussels where they create, using road barriers, a 7X10 foot cell in which to lock themselves as a form of protest.

The outrage felt by people all over the world toward the persecution of Julian Assange is growing by the day. For them, Julian’s judicial prosecution is by no means legitimate; it is brutal revenge, pure and simple, disguised as a “criminal case of spying”, and they intend to denounce it as such by all means possible.

“But while my street installation aims above all to save Julian’s life, absolutely in peril in Belmarsh prison, it also has other purposes,” Lorena explains. “It is a battle cry for all of us, because our democracy itself is at stake. To equate investigative journalism with spying, as the United States wants to do in demanding Julian’s extradition from the United Kingdom, is to kill investigative journalism, kill freedom of the press and, therefore, put an end to our #RightToKnow what our rulers are doing in our name – especially the illegalities they carry out and then cover up as “classified state secrets”, so they can go unpunished. Anyone who unconvers them is labeled a ‘spy’ and sent to jail, just like in the worse authoritarian regimes.

“I realize,” Lorena concludes, “that not everyone has the vocation or the willingness to do a demonstrative action such as the one I have undertaken here in Como. Not everyone feels the need that I felt to really do something concrete for Julian. But everyone can, in their own city, support Julian’s cause with simple but effective actions. For example, by buying and reading Nils Melzer’s book, “The Trial of Julian Assange,” or, for those who know Italian, Stefania Maurizi’s book “Il potere segreto: perché vogliono distruggere Julian Assange e WikiLeaks.” – and then by talking about them with family and friends. Or by participating in demonstrations organized by groups such as Free Assange Italia, Italians for Assange, Committee for the Liberation of Julian Assange or Free Assange Reggio Emilia.”

“Or by participating in mega events such as the 24hAssange marathon, a streamed event to be held on October 15. You can simply listen to it and get others to listen to it with you; or you can participate actively by expressing your point of view – just write to 24hassange@proton.me to reserve a space in the marathon schedule.”

“If one really wants to defend a man who has made a great sacrifice for us all, and if, at the same time, we want to defend our #RightToKnow, well, there is no shortage of opportunities. For example, Free Assange Italia, the group I just mentioned and with which I am super active now, offers several initiatives to participate in, depending on one’s inclinations and availability: http://freeassangeitalia.it/ciao ”

But who is Lorena Corrias?

A graduate in “Sciences of Tourism” from the University of Insubria in 2007 and now an office worker, Lorena had never been an activist in her life before she saw Riccardo Iacona’s TV program, “Julian Assange, journalism on trial” (Presa Diretta on 8/30/2021 viewable on RaiPlay).

The broadcast prompted her to seek out the pro-Assange committee closest to her, in her case Milan, and on July 2 of this year, Lorena received her “baptism of fire” outside the Milanese British Consulate during a rally held there to celebrate Assange’s 51st birthday. Overcoming shyness, she took the microphone in hand and delivered her first public speech, absolutely spontaneous – here it is, shortened:

“Ever since I was a child, I have always hated injustice, especially when it was committed by the strong against the weak. Inequality has always bothered me and, even as I grew up, this hatred for injustice has never abided. And in the case of Julian Assange, we are talking about a colossal injustice! Only, at the time, I didn’t know anything about it.

Then I saw the TV program about Assange presented by Riccardo Iacona, which I encourage everyone to watch. I was shocked to discover that today there is a hero who put his future and his life on the line – bravely and without any ulterior motives – to enable us to know the truth. Because only by knowing the truth can we make informed decisions.

I do not want to live in a world where everything is passed over in silence.

But most of all, I do not want to live in a world without Julian Assange! We need him!

Let me thank AnnaMaria Deidda, who has offered me logistical support during my campaign for Julian, and also Sara Giagnoni who has always been by my side.” 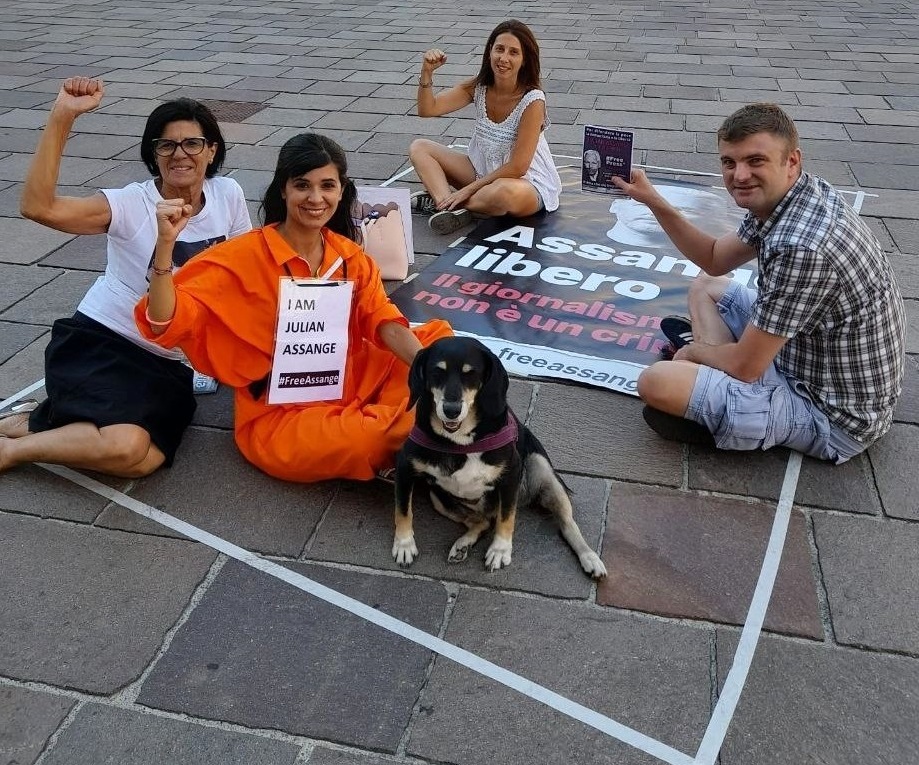