Studies conducted by MEDASSET also revealed that “132.000 sea turtles are incidentally caught, resulting in 44.000 deaths per year for all gear combined” [ii].

Therefore, several organisations, projects and programmes have been initiated in order to raise awareness about sea turtles, to protect them and to lessen the dangers they face around the world. Tunisia is active in this cause and has participated in the launching of various programmes to help protect sea turtles in the Mediterranean. One of these programmes is SeaTuMed. It was initiated by WWF in partnership with different local organisations working for the protection of sea turtles.

In order to know more about the programme, we conducted an interview with the local coordinator of SeaTuMed to get more insight on their work and accomplishments in Tunisia. 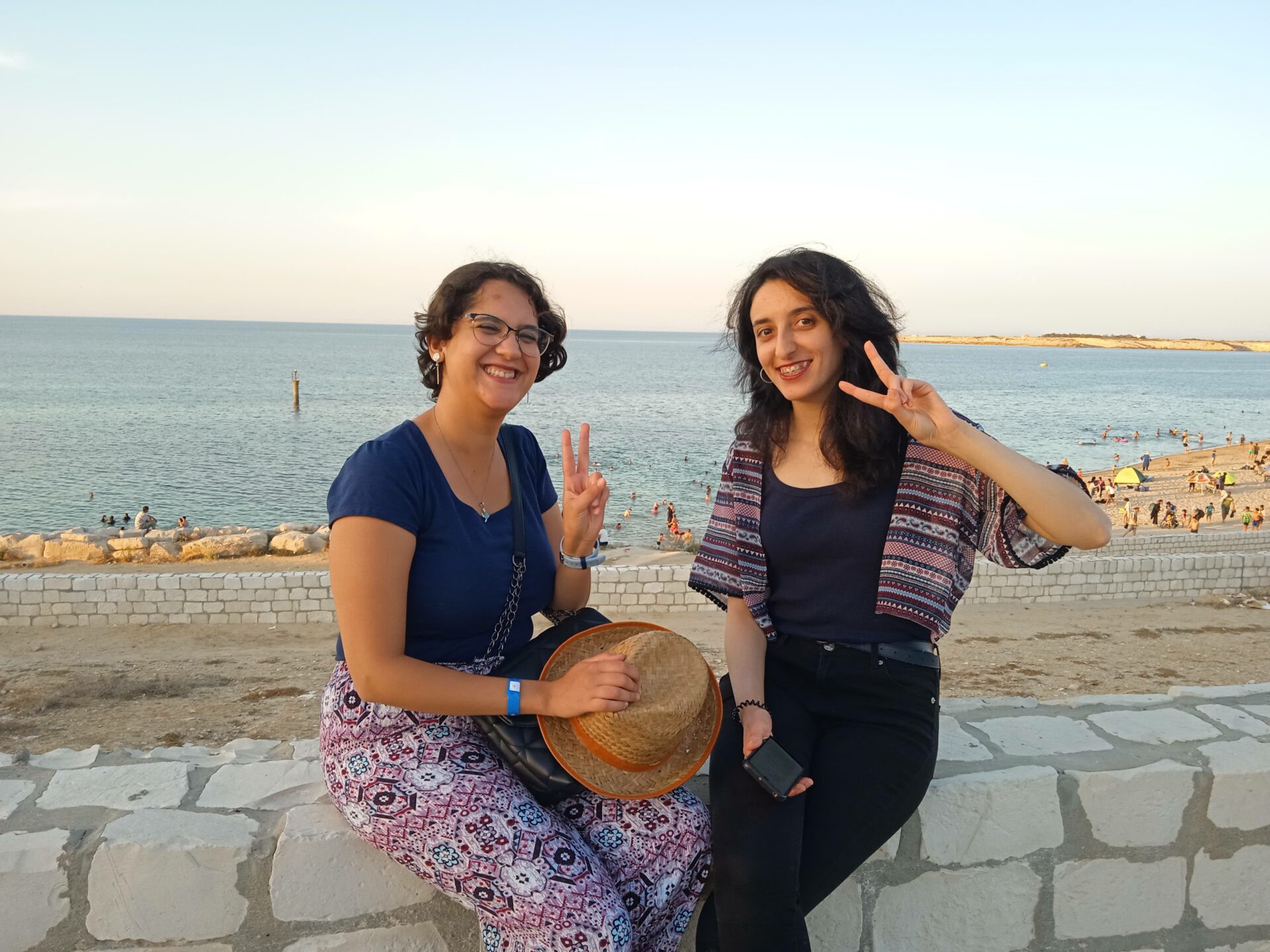 Please introduce yourself and what is your position in the programme SeaTuMed.

Ghada Elouaer is a 23-year old medical student and works as the local coordinator of SeaTuMed and represents the organisation “El-Fell Association for the Environment in Hammam Sousse”.

The programme SeaTuMed works on the conservation of sea turtles in the Mediterranean under the initiation WWF (World Wildlife Fund). It focused on “raising awareness, organising camps, building communities of environmental activists in Sousse. We started in Sousse, but expanded it to reach the entire Sahel region as well as the entire country; and we are expecting to expand it to include all of North Africa.”

SeaTuMed works to protect sea turtles in the Mediterranean. Could you tell us some details?

The term “SeaTuMed” is an acronym for “Sea Turtles in the Mediterranean” and it can be read as “Si tu m’aide” which is French for “if you can help”. We wanted the term to sound like a cry for help from the sea turtles that are trying the survive here in Tunisia.

The programme started in 2019, and ended in 2021. It was launched by WWF Tunisia in collaboration with MAVA, APAL, SPA RAC, AVFA and INSTM. The programme also included 15 other local associations in Tunisia such as ELFell Association in Sousse, Ajem in Djerba, and “Notre Grand Bleu” (Our Big Blue). The programme officially ended; but it left behind the built-in awareness and the workshops that we did and are still doing”.

Sea turtles are classified as keystone species. What does that mean and why is it important?

“Sea turtles are prehistoric creatures that have been around since the cretaceous period. They are wonders who have survived for millions of years while retaining their anatomy and dynamics.

Sea turtles are known as keystone species because they are bio-indicators. This means that their ecosystem, regime, and the things they consume (plastic and algae) allow researchers to know about the health of our oceans and seas. They help us answer the following questions “Is the ocean clean? Is it bad? How bad is pollution in it? How bad is the plastic pollution in our seas? How is the alga?” Added to that, sea turtles help with tourism and the advancement of a country’s economic infrastructure. Their conservation is essential because they are predators that feed on jellyfish. Thus, their extinction would lead to the deterioration of the ecosystem.”

What are the possible solutions that you’ve been working on and the activities you’ve done so far?

“When working on SeaTuMed, the main audience that we tried to reach are the fishermen, children, and the decision-makers. When dealing with fishermen and children, we focused on raising awareness and suggesting alternatives. As for decision-makers, we focused on addressing policies related to the economic and strategical impacts of the conservation of sea turtles.

Since our work was mainly directed towards raising awareness, we did many workshops in schools, principal counsels, other associations, as well as in different fishermen union centres. Throughout the programme, we learned that sea turtles hurt the Tunisian fishermen. So, as a means to avenge themselves, fishermen would hunt them down, kill them and/or sell them. Therefore, we wanted to break that cycle through our work on SeaTuMed as well as through our organisation El-Fell Association in Sousse.

We started by creating a network of local associations in Sousse that is concerned with the conservation of sea turtles, under the name “Sea Turtles Ambassadors”. It included many motivated youngsters, high school students, and anyone who wanted to join the fight. We are teaching them how to implement projects and workshops as well as how to inform and gather information about sea turtles.

We conducted several workshops and tried to make the activities fun and enjoyable to reach the children in different ways. The last workshop we had was on World Environment Day. We also developed other pedagogical and interesting activities such as “hkayet fakroun” (Tunisian Arabic that means “stories of a sea turtle”). This idea was developed by one of our team leaders, Abir, who made learning about sea turtles’ fun. We tried to make our workshops fun and interactive in order to leave an impact, and we hope that we did.”

Could you tell us something from your work that has surprised you?

“What astonished me are the beliefs that some people have about sea turtles. There are superstitions that claim that sea turtles are mythical legendary creatures that can cure any sickness or condition especially in relation to infertility and tumours. These beliefs run too deep to be changed and made our work more challenging. They also rendered the fishermen persistent to capture sea turtles to sell them and profit from them.

Luckily, convincing children was easier because they were not exposed to these beliefs. Therefore, we tried to spread the knowledge on sea turtles in a scientific way by informing them about the importance of sea turtles in protecting the sea.”

Could you tell us one fact you want to share about SeaTuMed that we cannot find on the Internet?

“SeaTuMed was not an expensive programme. The budget that we worked with was from 2000TND (around 650 USD) to 8000 (2600 USD) or 9000 TND. SeaTuMed was funded with low budgets that helped us create miracles. We were able to make an impactful outreach and create an actual change in many lives. Many sea turtles were saved thanks to this programme that did not require a big budget.”

Ghada also shared some tips on how to protect sea turtles and the actions to be taken when one finds a sea turtle:

“If you find a sea turtle, whether it’s alive or dead, you need to know what you should do. First, you need to report it. Call the associations and organisations that are working on sea turtles’ conservation in your area. Second, you should protect yourself. Don’t touch it! Just take a picture, and share it on social media (for example, on the Facebook group Tunsea). Plus, if you want to learn more about sea turtles, join our events, have a look at our pages and check what we have done and what we are doing. We will always be there in order to reach out and to make sea turtles even more popular than they already are.”

By the end of the interview, we asked Ghada if she had anything she wanted to add and to deliver a message to the readers. With excitement, she added:

“Love sea turtles! You need to know this creature! You need to go to INSTM in Monastir and Sfax and meet an actual sea turtle. I can guarantee that you’ll fall in love with it, and you’ll want to protect it. Always help be the next change for the impact and for the good of sea turtles because they really deserve it. As a creature that has lived for millions of years, it is really unjust and evil of us to make it extinct at the time that we are alive.”

Ghada informed us that currently there is no active programme, but the team is still doing workshops, hosting and attending events. She also added how since there are several organisations around North Africa that were interested in the programme, “the next step is to unify these organisations and these multiple partners in one network to protect sea turtles in the Mediterranean and in North Africa.”

Mayssa Issaoui
A translator and a human rights defender who holds a Master degree in TESOL (Teaching English to Speakers of Other Languages) and a Bachelor degree in English Language, Literature and Civilisation. In addition to that, Mayssa is currently working as a certified trainer and the Tunisia National Coordinator at the INGO World Youth Alliance.