As a sequel to “A Dialogue with Edicio dela Torre: On Democratization,” Pressenza journalist Perfecto Caparas interviews Edicio delaTorre about the civil society challenges posed by the ascent to power of Ferdinand Marcos Jr. following the May 9, 2022 Philippine presidential elections.

“Our courses of action need to navigate the complex and changing spaces between the pole of political resistance and opposition, and the pole of engagement and participation.” – Edicio dela Torre

Perfecto Caparas: With the ascent to the presidency of Ferdinand Marcos Jr., what do you think should be the direction, thrusts, strategies, and tactics used by civil society organizations in dealing with this situation?

The first storyline is the struggle for democracy against authoritarianism, and the need to defend our hard-won gains.

The election of Ferdinand Marcos Jr. coincides with the 50th year anniversary of the martial law declaration by his father in 1972. Understandably there is anxiety, even fear, that he will govern in an authoritarian way like Ferdinand Marcos Sr, using intimidation or outright repression against independent media, protest actions, and all progressive organizations.

The second storyline is the struggle for truth against disinformation, including historical revisionism.

The Marcos family has repeatedly complained that they have been unfairly “demonized” and that they want to set the historical record straight. One theme of the Marcos election campaign was that the martial law years were a “golden age” of peace and discipline, development and progress.

The convergence of these two storylines leads civil society organizations to call for constant vigilance and for resistance on multiple fronts. The words of Milan Kundera have fresh resonance: “The struggle of man (people) against power is the struggle of memory against forgetting.”

Bantayog ng mga Bayani (Monument of Heroes), an organization I am part of, is dedicated to honoring the martyrs and heroes of the struggle against martial law. After the elections, it has become a gathering place for sharing stories of our generation with the younger generation. The names etched on the Wall of Remembrance inspire many visitors to pledge that they will persist in the struggle for democracy, and resist attempts at revising history.

So far, harassments are relatively mild – police at the gates, intimidating people who hold activities in Bantayog. We worry that our documents and archives are at risk, so there is a rush to digitize them for safer storage in the cloud. The same has been done by the Memorial Commission, a government office that keeps the records of over 11,000 validated cases, from more than 70,000 submitted claims, of human rights violations during martial law.

A potential flashpoint is September 21, 2022, the 50th anniversary of martial law. How will the Marcos presidency deal with it? Will he look for ways to avoid heightening attention and tension? Or given the likelihood of anti-martial law protests, will he meet them head-on and assert his counter-narrative?

Those opposed to the Marcos presidency expect to rally increasing support. But it is useful to remind ourselves about the early years of martial law. While progressive organizations went instantly into a resistance mode in 1972, the majority of Filipinos and Filipinas were into a “wait and see” mode. Many were even willing to “give martial law a chance” hoping for its promised benefits.

This leads us to the third storyline which is more complex and challenging for civil society. It involves the debate about democracy and development.

One sweeping interpretation of the election of Ferdinand Marcos Jr. is that it is a popular rejection of post-martial law democracy, because of its failure to deliver on the hopes of the Filipino people, especially of the poorer majority, for development that benefits them.

This storyline also explains the previous election of President Rodrigo Duterte as a protest vote against EDSA-restored liberal democracy. With the election of his daughter Sara Duterte as vice-president and a prospective presidential successor in 2028, it seeks to reinforce the case for a Philippine variant of authoritarian populism.

The same storyline denigrates the democratic credentials of former Vice President Leni Robredo as representing mainly the sensibilities and interests of the middle class and the elite, downplaying or ignoring her track record of service to grassroots communities.

During the 1970s, the idea of a developmental state was prevalent in Asia and they were mainly authoritarian. That is the larger context for martial law and the authoritarian presidency of Ferdinand Marcos Sr. The succeeding waves of democratizations tended to be combined with the ideology of a neoliberal conception of development and governance. That is the larger context for the critique of the post-martial law administrations.

Whatever development and governance ideology is adopted by Ferdinand Marcos Jr., the historical record of large-scale corruption hangs over the Marcos name and family. Together with corruption, his technocrats have to confront also the record of crony capitalism.

Between resistance and engagement

With this as the context for civil society responses, our courses of action need to navigate the complex and changing spaces between the pole of political resistance and opposition, and the pole of engagement and participation.

One response by civil society, especially human rights organizations, is to develop more effective ways to continue defending and promoting civil and political rights while linking them to economic, social and cultural rights.

Because of a Marcos presidency, civil society organizations tend to focus on national issues and governance. But we must devote enough attention and energies to the arena of local governance and development.

The Local Government Code is an important legacy of the post-martial law Aquino presidency, and there are many good practices and results of civil society participation in local governance and development. The innovation of “people’s councils” as mechanisms for meaningful people’s participation, pioneered by the late Jesse Robredo, is now supported by national policy. These offer many possibilities even under a Marcos presidency. 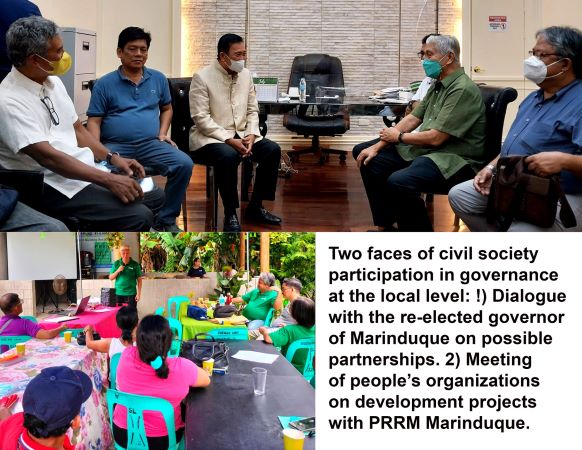 Edicio dela Torre during a recent visit to Marinduque. Dela Torre met with the re-elected governor in the morning and with the community leaders in the afternoon to discuss possible areas for partnership and cooperation on development projects.
Participatory local governance photo credit: PRRM.

Another crucial arena for civil society engagement is cyberspace. Because of our negative experience with trolls and algorithms, we may be inclined to judge it as an unfavorable terrain that is disadvantageous to civil society’s advocacies, I prefer to look at it as a “site of struggle” (a phrase used by friends from South Africa).

Whatever the terrain, we need to develop and pursue a blended strategy (physical and virtual) of sustained action, and explore flexible innovative tactics, especially with the younger generation.

About Perfecto Caparas. Writes regularly for Pressenza and Pinoy Publiko. He served as a journalist of The Manila Times, Ang Pahayagang Malaya, The Philippine Post, Pinoy Gazette, UCANews, and ISYU Newsmagazine. He is a licensed attorney and lifetime member of the Integrated Bar of the Philippines.