Rawan Bo-khuntod (l) and another farmer planting seedlings (Image by Pattama Kuentak/IPS)
Tucked away in Pathumthaini province, on the outskirts of Bangkok, 0.24 hectares of land adjacent to the Seangsan temple became an urban vegetable farm run by members of the Pathumthani Disabled Association.

The Samart Khon Samart farm consists of a large open greenhouse at the back of the land. In a small grassy field at the front are six raised beds of Chinese cabbage (Brassicca rapa chinensis) and coriander. To one side are the office building and workshop.

Inside the greenhouse, three rows of raised beds are filled with seedlings of a variety of salad vegetables, still too small to recognise. The soil is covered with rice straw to protect the young plants.

Ten years ago, Khoen Sapanyabut founded the association to highlight the education and employment rights of people with disabilities.

The land, donated by the temple, is almost two kilometres from the main road. One side of the tree-lined road is flanked by a canal that is dotted with low-income houses and community shops. The other side is lined with everything from factories and vacant land to a school.

With the land secured, Khoen, who uses a wheelchair, ponders what activity members should concentrate on. He chose vegetable farming.

“People with disabilities have different skills. Some are good at computers or repairing devices. But growing vegetables is an activity that everyone can do, even without proper education,” he says.

The association first adopted hydroponic farming and grew vegetables such as lettuce, water spinach and Chinese cabbage, known locally as bok choy. Although these vegetables are easy to grow and sell, they are cheap and unprofitable.

Moreover, due to limited space, production could not meet demand. The total cost of hydroponics, including electricity, water system and chemical fertiliser, also exceeded profits.

The switch to soil-based farming occurred when the association partnered with Bangkok University three years ago and began receiving annual funding and support, including the greenhouse.

The farm now has 28 raised beds in total. All are designed at a certain height so that farmers in wheelchairs can be well accommodated. The aisles are also wheelchair accessible.

Today, the farm grows red and green oak lettuce, kale, romaine lettuce, frill ice, iceberg and butter lettuce, all of which are high-value vegetables. All production follows organic farming practices, including compost, which is made by the members.

Rawan Bo-khuntod, 53, is responsible for the farm’s daily paperwork. He also does the book keeping and sometimes helps farmers prepare and plant seeds. Rawan says the job has boosted his working life as a disabled person because he particularly enjoys administration.

It has also made his life healthier. “I used to find it difficult to eat vegetables. Now I like butter lettuce and I usually add it to my salad”. Organic vegetables not only taste better than chemically grown ones, he adds. 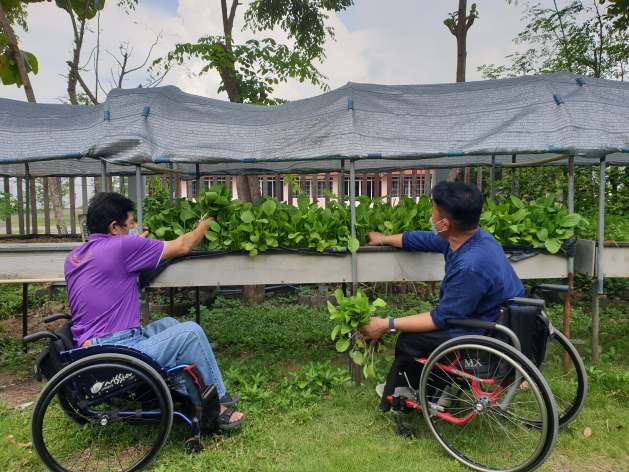 An additional boost came in the form of a partnership between the farm and the government’s Digital Economy Promotion Agency (Depa).

Rittirong Chutapruttikorn, dean of Bangkok University’s Faculty of Architecture, who led the design of the greenhouse, says he was looking for ways to make life easier for farmers. He had seen how tending crops and watering while sitting in wheelchairs consumed their time and energy.

One of the first steps after partnering with Depa was to install a digital irrigation system using a mobile phone application. Automatic water sprinklers were connected along with the mist sprinklers. With temperature control, the system provides four minutes of sprinkler irrigation five times a day.

Prasert Latim, disabled as a result of polio as a child, is one of two people accessing the application through his phone. Using the automatic water sprinklers is more convenient as he doesn’t have to keep monitoring and watering the vegetables all day, he tells IPS. It also prevents the soil from splashing, which can deplete nutrients.

Prasert, 56, says smart irrigation will not only save water but also money, especially as utility costs rise.

The Samart farm is part of the Digital Village Initiative (DVI) project promoted by the Food and Agriculture Organization of the United Nations (FAO), which in Thailand operates in collaboration with Depa, the Ministry of Agriculture and Cooperatives and Kasetsart University.

“Our goal is to find a way to encourage farmers to adopt more digital technologies,” says Witsanu Attavanich, associate professor of economics at Kasetsart University and senior consultant to FAO.

“We can apply the internet of things (practical digital applications) in the planting and harvesting processes. All this should generate more income for both farmers and the community,” says Witsanu. His team of professors from the faculties of agriculture and engineering will assist farmers in both agricultural and technological areas.

Despite the members’ determination, the farm faces challenges. The first is limited space. In addition, the farm cannot meet market demand due to inconsistencies in production.

Witsanu’s job is to find sustainable business models not only for Samart Farm, but also for two other DVI farms in Nonthaburi and Chumphon provinces.

For Samart Farm, the professor says he plans to collaborate with local government agencies and villagers in nearby communities to increase land, labour and, ultimately, production to meet demand. Witsanu also plans to implement a long-term business plan in an attempt to encourage more people to join the project.

On the technology side, he says the team will also explore additional practical Internet of Things tools to better assist farmers and ensure everything they adopt keeps up with the emerging technology.

Although “the application (that runs the irrigation system) is very advanced”, as it can support sensors for air temperature, moisture levels in the air and soil, and light intensity, Rittirong says “we are not yet where we want to be” because farmers still lack knowledge about technology, soil, pests and vegetable diseases. 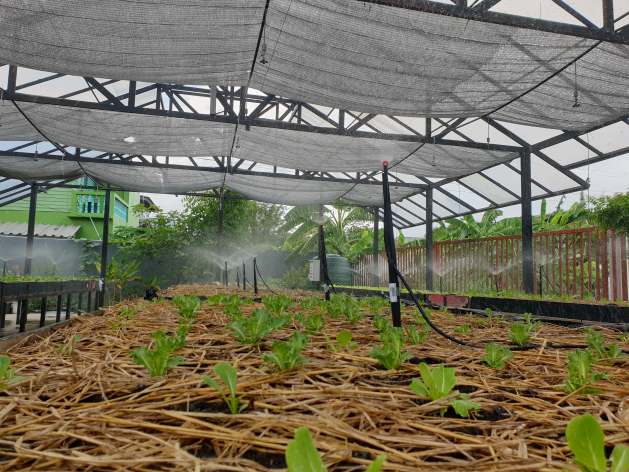 Witsanu says training on agriculture, technology and business will be provided to both Samart Farm farmers and nearby villagers. That information will be collected in a guidebook at the end of the project.

Khoen envisions the association becoming a learning centre with a small café selling healthy drinks and food made from vegetables from the farm. He hopes to set an example for other associations and surrounding communities.

Although it is still in its infancy, “I’m proud (of the farm) because it shows that disabled people can grow vegetables like normal farmers,” he says.

A global initiative inspired by FAO Director-General QU Dongyu, DVI is being piloted in the Asia-Pacific region. This village is among many that are showcasing and sharing their progress with other villages and areas in Asia and the Pacific, as well as in other regions of the world.