“It shouldn’t take a European Court to tell the U.K. government a simple fact: It’s morally repugnant to trade human beings for cash,” said one group in London.

Human rights campaigners celebrated late Tuesday after a European court ruling led to the cancellation of a flight to deport asylum-seekers from the United Kingdom to Rwanda as part of a controversial deal the governments unveiled in April.

“We will continue the fight tomorrow and against every racist deportation”

“We fought back against the government’s racist Rwanda plan and WON,” tweeted the London-based Joint Council for the Welfare of Immigrants (JCWI). “Today’s victory shows that, when we come together, we can beat this government’s toxic anti-migrant agenda.”

While also welcoming the news that “nobody will fly to Rwanda,” the U.K. group Freedom from Torture said on social media that “we know the [government] won’t be giving up. So let’s give this everything we’ve got, starting now. Together we can win.”

Vowing to keep up the fight, JCWI similarly warned that “this is just the beginning” and predicted that U.K. Prime Minister Boris Johnson “will blame anyone but himself for this abhorrent failure of a plan: He will scapegoat refugees and migrants. He will try to scrap the Human Rights Act.”

Referring to the money that the United Kingdom gives Rwanda under the deal, JCWI also said that “it shouldn’t take a European court to tell the U.K. government a simple fact: It’s morally repugnant to trade human beings for cash.”

According to BBC News, “up to seven people had been expected to be removed to the east African country,” but a ruling from the European Court of Human Rights (ECHR) in the case of a 54-year-old Iraqi asylum-seeker “led the remaining men to appeal—some to judges in London.”

The broader policy is set to be reviewed in British court next month. In its decision Tuesday, the ECHR said that “the applicant should not be removed until the expiry of a period of three weeks following the delivery of the final domestic decision in the ongoing judicial review proceedings.”

Plans for the £500,000 ($600,585) chartered deportation flight to depart a military airport in Wiltshire late Tuesday sparked protests against the policy, blasted by human rights experts around the world but championed by top Tories in the United Kingdom, including Johnson and Home Secretary Priti Patel, along with Rwandan leadership.

“Rwandan authorities have said the agreement would initially last for five years, with the British government paying £120 million ($158 million) upfront to pay for housing and integrating the asylum-seekers,” The Associated Press noted. “Britain is expected to pay more as Rwanda accepts more migrants, although the exact number of people the U.K. is expected to send isn’t known.”

Patel on Tuesday described the U.K.-Rwandan deal as “world-leading” and said she was “disappointed” by the ECHR’s decision but “we will not be deterred.” She added that “many of those removed from this flight will be placed on the next,” preparation for which “begins now.”

The New York Times reported that after the flight was canceled, Yolande Makolo, a spokesperson for the Rwandan government, said that “Rwanda remains fully committed to making this partnership work,” and “stands ready to receive the migrants when they do arrive and offer them safety and opportunity in our country.” 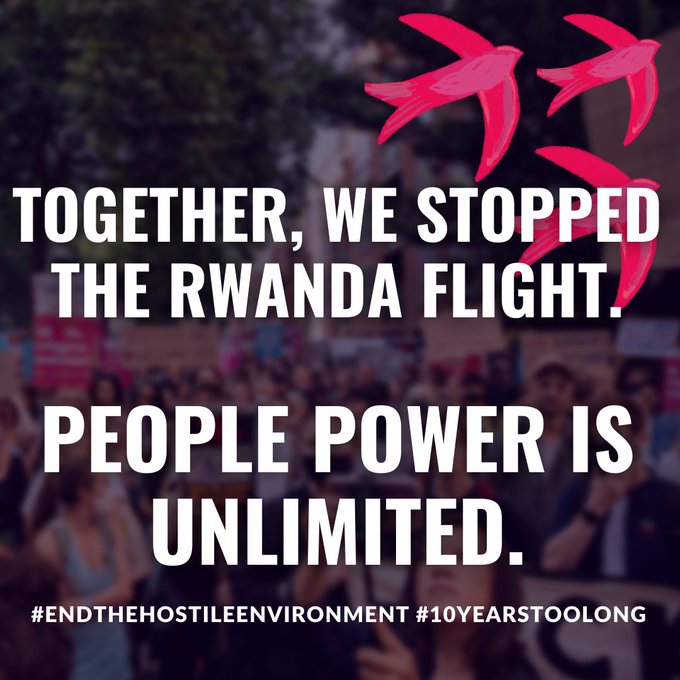 Meanwhile, critics of the deal—from activists across the United Kingdom to members of Parliament—remain determined to defeat it.

“We’re pleased the courts have ruled to stop this flight,” said Mark Serwotka, general secretary of the Public and Commercial Services Union, according to The Guardian. “It’s time for the government to stop this inhumane policy, which is the basest of gesture politics, and start to engage seriously with sorting out the asylum system so those who come to our country seeking refuge are treated fairly and according to the law.”

Following protests outside Patel’s office on Monday, demonstrators with Stop Deportations laid down in the road outside a detention center in an effort to block the transfer of asylum-seekers to the flight—an action that led to some arrests, according to the group. 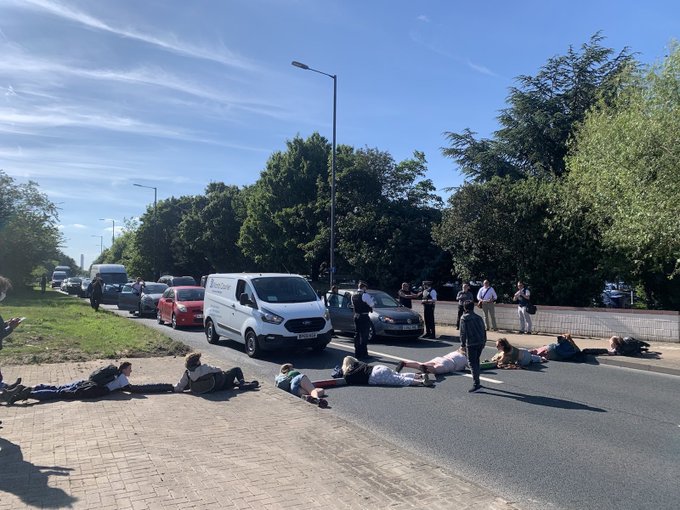 “We have won today,” Stop Deportations said after the flight was grounded, “but we will continue the fight tomorrow and against EVERY racist deportation.”

Some leftists British politicians spoke out in support of the protests and against the policy on Tuesday.

MP Jeremy Corbyn, a former Labour Party leader, called the ECHR’s intervention “a very welcome decision” and “a devastating blow to the government’s inhumane plans to deport refugees to Rwanda.” He also thanked “the many brilliant campaigners who have fought tirelessly for the rights of refugees.”

Labour MP Paula Barker also celebrated the “superb news,” adding: “Well done those involved. The fight against this policy is not over yet, but you can all be proud of what you have achieved tonight.”

Common Dreams
Common Dreams is a non-profit independent newscenter created in 1997 as a new media model. By relying on our readers and tens of thousands of small donations to keep us moving forward—with no advertising, corporate underwriting or government funding—Common Dreams maintains an editorial independence our readers can count on.