From afar, Luna and Yassin look just like any other young couple. Love is what surrounds them and binds them to one another. Luna is 24, with blonde curly hair, hazelnut eyes and lots of freckles all over her face. Yassin is 30, with wavy black hair and darker eyes. If you take a closer look, you will find out that they are getting married soon. However, the society they are immersed in has not always seen them as just a loving couple. Those whose eyes are veiled with hatred and ignorance have made comments on the ‘non-religious, white, girl who has converted to Islam’, and on her partner, ‘the Moroccan Muslim boy living on the outskirts of Turin, Italy’. Ever since they started dating, verbal violence has clouded the love between these two young people. In Italy’s society, it can be challenging to date a man who is subject to intersectional discrimination: racial violence and religious violence.

I believe love can heal violence, and have decided to interview Luna and Yassin, to let their experience of violence and love be heard. When one thinks of violence, the first things that come to mind are physical pain, discomfort, killings, war, and destruction. Violence is more than what is visible to the eye or physical on the skin. It is when violence is invisible that it hurts more. Take, for instance, words that were said by someone who offended you, and caused you pain. That pain might not have been physical, but its wounds kept hurting for a while after those words were spoken. Some of us will therefore agree that violence can present itself in various forms. If a person of no religion offends an individual for their faith, it is violence. When a person of a different culture, insists to impose their traditions on people of another culture, that is violence. Violence is multifaceted, but one will still recognise it when they feel it.

When I asked Luna and her partner Yassin how they would define violence, their answers came out straight away. “Personally, I find verbal violence the most painful. Differently from physical violence, words hurt you on the inside” said Luna, and Yassin agreed “Words, language, hurt you more than blows. [Physical] wounds can heal but once words are spoken, they don’t go back. For me, violence is verbal rather than physical. I think physical violence is less damaging [in the long run]”. For Luna “violence is most painful when you can’t erase it”

Q: Under what other forms do you think violence presents itself?

For Luna, who grew up in a family of diverse religious and spiritual orientations and whose decision to convert was not taken well by some of the people she loves, “indifference” is a form of violence. For Yassin, who has been a victim of racial and religious discrimination ever since he was born, violence is “the violation of the rights of others […] it is anything that insinuates and touches your personal space”.

I then asked a question that sounded a lot like I wanted to get a sneak peek into their wedding vows: Who is Yassin for Luna? Who is Luna for Yassin?

She started by saying he is the “personification of diversity”who has given her the opportunity “to change [her] vision on multiple things” such as her previous view of Islam. “At the beginning of our relationship, I looked at Islam through the stereotypes that very often circulate in our society. A religion based on prohibitions and rules. In reality, Yas and I found common grounds under this point of view”.

Q: So, we could say you and Yassin helped each other to gain different perspectives and have a more open-minded vision of life?

“Yes, you could say that. He, for instance, has helped me discover certain aspects I did not know. Whereas I probably was not the person he had thought of sitting alongside for the rest of his life. But he’s in handcuffs now [laughing]” giggled Luna.

“Luna and I have been able, and are still trying, to achieve results and reach compromises that have led to what [a] marriage [between] a mixed couple, can be. We have proven [that a mixed couple] can live well together” said Yassin, who then continued: “We give each other the right influences and complete each other under various aspects”.

I asked them if they had ever witnessed violence being perpetrated on their partner, respectively. Luna nodded. “Yes still experiences verbal violence from people I know, my grandmother who is a practising Catholic woman. It happens, and I see it”. For his part, Yassin commented,“I don’t think we have ever had these kinds of problems [refers to Luna being subject to violence because of her decision to convert]”.

Luna disagreed on this point, and it showed me how different people, although experiencing the same behaviours can perceive those behaviours differently.

Q: Would you agree that the prejudice in his (Yassin’s) regard comes from their ignorance about Islam, and Yassin himself?

“That is one of the reasons. They don’t know the religion and they don’t know Yas as I know him. Even if they do know I have espoused Islam, and they know me personally. They still have a form of prejudice in his regard” she responded.

Yassin argued “[he] never blames people for words spoken out of ignorance about his religion” as he thinks those who do so do not intend to commit a form of violence.“When you do not understand a different reality, such as Islam, you tend to keep your distance from it and end up stigmatising it. This is very wrong”.

Q: Regardless of the previous religious and/or spiritual beliefs Luna might have had, what has it meant for you to be able to transmit these morals to Luna?

“It’s been a transformation process, for the both of us. It’s an evolving journey. She was fascinated by the values and principles that we, as Muslims, tend to share with each other. These are the visible things one notices when they meet you […] The first things you notice in a person are their values, the way they talk, and how they move. To answer your question, then, yes. Being able to transmit my morals to the person I love has certainly strengthened our relationship”

I guess when someone violates those you love that violence is reflected threefold on yourself. You start getting protective, you need to react, and you would do anything to take onto yourself the pain they are experiencing. Certainly, the way one reacts to a given situation changes according to context, personality, and emotional state.

I asked Yassin whether he thinks his faith has helped him react to racial violence differently than he would if he was not a practising Muslim. He replied that the only disturbing memory of racism he remembers today was being called the N-word in Primary School. “This is an example of how words can sometimes mark you more than physical violence […] It’s been years, but the word stays”

He then went on, with respect to how Islam helps him cope with violence in his daily life. “It’s logical. Religion is 99% of my being. It affects everything I do and say, which I base on respect and according to the dogmas religion has gifted me with”

Q: Do you (Luna) think Islam has changed the way you respond to violence?

“I don’t really mind what people think or say about me, especially if their judgement comes from stereotypes and prejudice. In terms of religion, it has helped me to understand what type of people I want to be encircled by in my life. Regarding the way I react to prejudice, I am still working on it. I think it’s part of my personality to not be able to react well when I am subject to verbal violence. I am different from Yassin on this. I need to learn how to transform my aggressivity and defensiveness into positive energy”.

Yassin intervened and said it has been a journey for himself too.“It’s not being born into a religion that enables you to internalise every aspect of it. It takes time. If you want to do good to yourself, you need to be able to transform that energy, and explosivity [in response to violence] into something positive, something good. Otherwise, you will be the one who suffers in the end.”

Yassin’s wordsare the basis of harmony and nonviolence, not just in Islam or any other religion. Yassin has learnt to respond to violence with non-violence, to “put out the fuse” as he likes to call it. This is a fundamental principle that every human being should internalise to practice nonviolence. In their specific case, they have lived situations in which their love turned them into subjects of violence. However, Luna and Yassin have learnt to fight ignorance with consciousness, prejudice with indifference, and hatred with love. Hopefully, their story will be able to inspire whoever feels violated to stand up for themselves and love themselves first. Remember that violence is never employed in the name of love, but love is able to heal violence. 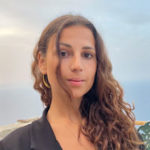 Anita Barbara Gillone
I am an undergraduate student of International Relations at SOAS University of London. I am passionate about diversity of all types. I find writing the best way to communicate my thoughts clearly. I know five languages and play the cello. I love helping others as much as I possibly can. Journalism and humanitarian activism are my main focuses right now.