During the course of election day, there have been some incidents that have clouded Colombians’ right to vote.

The Electoral Observation Mission (MOE) indicated this Sunday that 32 irregularities have been registered in which the electoral constraint has the highest rate of complaints from employees who have been threatened by their employers with dismissal if they do not vote for their candidate.

For this reason, the election watchdog organisation has stressed that this is a crime that is stipulated in article 67 of the Substantive Labour Code. In addition to this, of the polling stations observed, 23.9% did not show that the ballot box handed out was empty; 37% did not have information on how to vote and 67% of the points observed did not have the necessary material to guarantee the voting of transgender persons.

Finally, the authority prevented some election witnesses from entering the polling places located in the localities of Suba and Fontibón in Bogotá, the Colombian capital.

Aggression against the observers of the Historical Pact

During the first hours of the second round of the presidential elections, there have been incidents that have been denounced by the observers of the Historical Pact coalition represented by Gustavo Petro. Several of them were attacked by an agent of the National Police, while carrying out his work at the polling station located in Colón, Génova, Department of Nariño.

According to the complaint, the police officer beat and used excessive force against the observers and injured the right arm of one of the members of the Historical Pact. 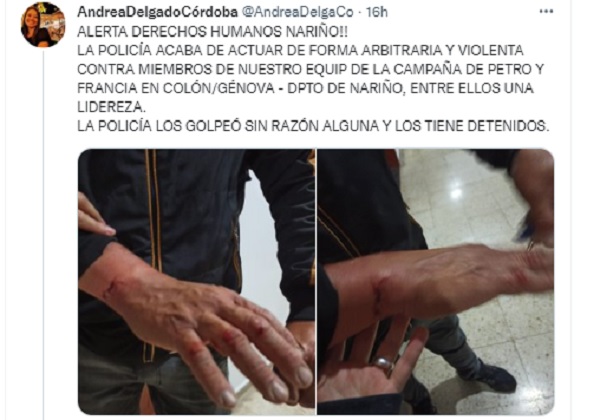 So far, Colonel Edwin Orlando Rojas Chisco, commander of the Department of Nariño, has not made a statement on this incident, which has already been reported to the local authorities.

The campaign of the candidate Gustavo Petro denounced that in the voting tables located in the city of Buenaventura, department of Valle del Cauca, voters were receiving ballots with a mark in the blank ballot box.

Despite having no weight in the second round, the Political Constitution of Colombia indicates that the option of a blank vote must be given. However, by having some kind of prior marking, these ballots are considered invalid and, therefore, the right to vote freely would be violated.

Ethnic and Afro communities come out in search of change

In the midst of the difficulties, the inhabitants of the community located two hours from Riosucio left yesterday, June 18th, in boats, to exercise their right to vote in the municipal capital, located more than 24 hours away by raft.

This is an example of the difficulties faced by a large number of Colombians living in rural and remote areas in the different departments of the country.