It would be quite appropriate for a college professor to assume students know that a tree is alive and a rock is not.

For several summers, I have had the pleasure of teaching biology to Tibetan Buddhist monks exiled in India. This program, called the ETSI (Emory-Tibet Science Initiative), was sparked by discussions the Dalai Lama had with Emory University researchers in the 1990s and has blossomed into a way for monks of all ages to learn about science in the decades since.

The differences between modern biology and traditional Buddhist understandings of nature can seem significant – even in their definitions of what is “living.” Biologists’ understanding of life incorporates animals, plants and bacteria. Traditional Tibetan monastic teachings, on the other hand, base life on the idea of consciousness. Bacteria and animals, including humans, are recognized as having consciousness, and therefore are considered “living” beings. Plants, according to these traditional teachings, do not have consciousness and are thus “nonliving.”

But differences like these have led me to understand what I take for granted in my teaching at the University of Richmond and how much richer learning can be when we step back to explore the most basic – yet biggest – questions together. Thinking about how I would present various topics to the monks has given me concrete lessons to take back to my classroom in Virginia.

Looking at life up close

I study the relationship between bacteria and plants. In most introductory biology courses, college students bring an intuitive sense for what science defines as “life,” one they have built since kindergarten. But what if educators don’t assume that students “know” what defines a living thing – or, better yet, what if we used assumptions to spark inquiry?

Developing a definition of a “living thing” can be an effective way to introduce scientific inquiry. Through an activity in which students place something in “living/nonliving/once-living” categories, students can explore questions at the edges. For instance, is a virus a living thing? How about artificial intelligence? How would we decide when we discovered extraterrestrial life? These philosophical discussions about life spark interesting discussions across both cultures.

In both educational settings, we can use students’ observations of pond water under a microscope to discuss how scientists have built their concept of life, based on the following characteristics: something that is made of cells, has the capacity to reproduce, grows and develops, has evolved, uses energy, responds to stimuli and maintains homeostasis – a way to maintain an appropriate level of all sorts of chemicals and large molecules.

Different biologists will include or exclude some of these properties, and discussing whether to include them in our classroom’s definition can be an exciting process for students. In addition, we often extend this conversation to discuss how the definition of life has changed throughout human history and consider what questions biology may not be able to field, such as the notion of a soul or the Tibetan Buddhist concept of consciousness.

There are seeming contradictions between scientists’ and monks’ perspectives on other topics, as well. For example, traditional Buddhist teachings affirm spontaneous generation – the idea that life can arise from nonlife – which biologists rejected in the 19th century, based on experiments by Louis Pasteur and others.

According to Tibetan Buddhist perspectives, some life, like worms and bacteria, can be created through “dampness.” In the monks’ view, too, all animals are sentient, meaning that they have consciousness, as opposed to plants, which do not. This has traditionally been how Tibetan Buddhism forms a definition of life.

To explain the biologists’ view, we ask ourselves: How can biologists truly show what makes something “living”?

The key is the scientific method, based on testing and analysis. At the monastery, science instructors approach questions about spontaneous generation or sentience through the method’s series of questions: What experiments could you perform that could test your hypothesis that life arises from nonlife? What controls would you include to be confident in your results? How do you increase your confidence in the conclusions? 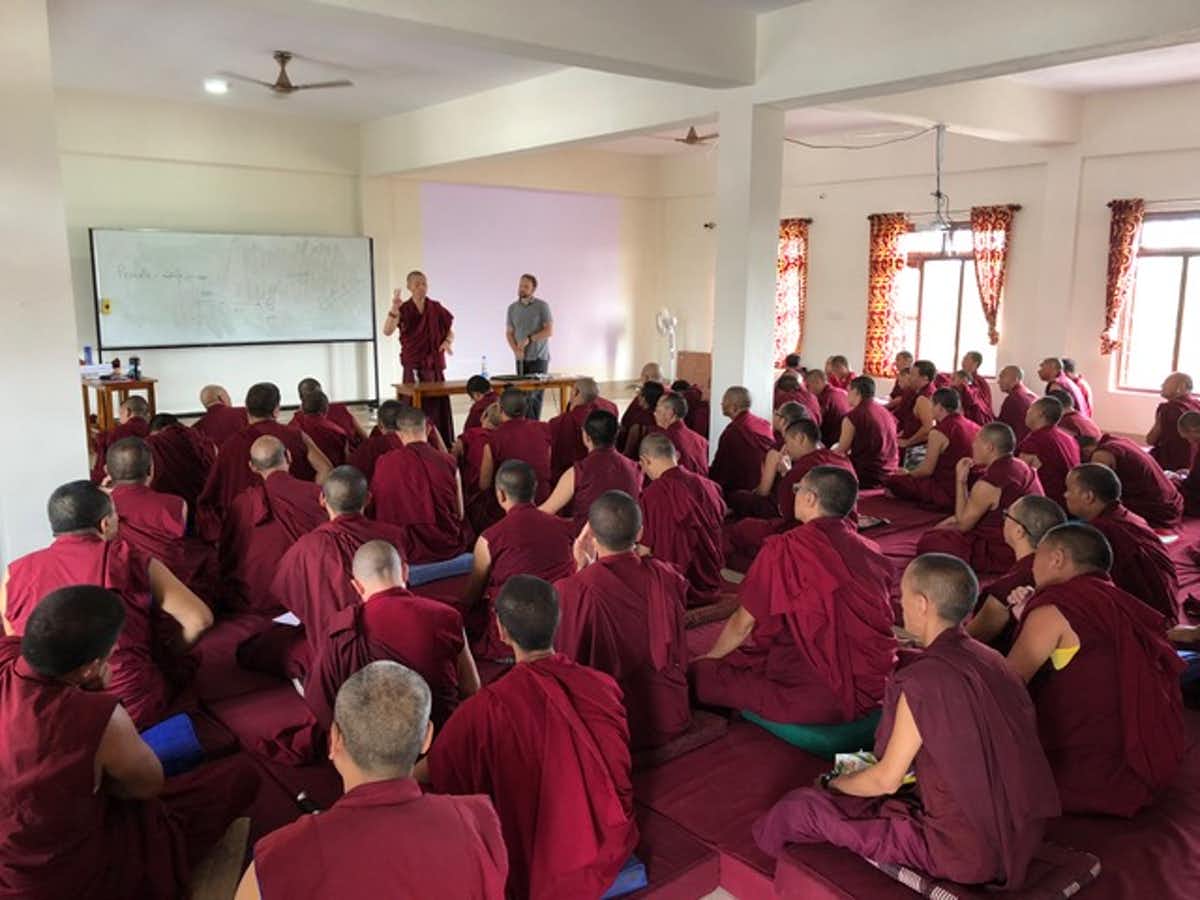 Instructors and interpreters conduct a class with Tibetan monks at Sera Jey Monastery as part of the Emory-Tibet Science Initiative. Courtesy of Dan Pierce

These conversations highlight that the foundation of modern science, this scientific method, is extremely compatible with the Buddhism the monks practice.

In part, this is because debate is central to their monasticism. Like the scientific method, debate requires that the participants approach ideas with skepticism and request “proof.” Tibetan Buddhists practice debate for hours daily. As one monk challenges another, they volley a religious idea back and forth to develop a deeper understanding of the concept.

While scientists don’t practice formal debate, we exercise similar muscles when we try to build a deeper understanding of the processes of life through theory, experimentation and challenging one another’s ideas.

Where science and religion meet

As we go further in any kind of classroom – at the monastery, or at a university – teachers and students sometimes find questions for which biology does not have especially satisfying answers: What are the origins of life? What is the purpose of sleep?

As teachers, we can use those to spark students’ curiosity, along with additional questions about how religion and biology intersect. Though some may bristle at the idea of theological questions entering a biology course, raising them can engage students by integrating science with deep questions they may have about their lives. What does biology have to say about the evolution of religions? How does what we learn in biology influence the concept of a soul? If we believe in the idea of souls, what organisms have them?

For the monks, this last question is critical, as Buddhism teaches that all life is sentient and sacred. When working with the monks, visiting teachers are very careful not to dispose of the microorganisms we inspect using a microscope as I would at the University of Richmond. Out of respect for their views, we simply pour the microorganisms outside in the grass. The monks have given me a new perspective on experimentation, including reconsidering the necessity of using certain organisms in research and teaching.

Scientific inquiry truly crosses cultures. And when we engage our differences head-on, with openness and compassion, it can prompt more meaningful learning for teachers and students alike.

I would like to thank Geshe Sangpo la for insights into Tibetan Buddhism that helped guide this article.