March 1, 2022. Upon the invitation of a youth-led organization known as International World in Korea (IWIK), an affiliated organization of the Seoul Metropolitan Government, Challenge Korea Headquarters, locals and foreigners commemorated the Korean Independence Movement Day, the March 1st movement in Seoul.

On March 1, 1919, a group of Korean intellectuals met at a restaurant in Seoul to formally introduce the Korean Declaration of Independence from colonial Japanese occupation to the world. 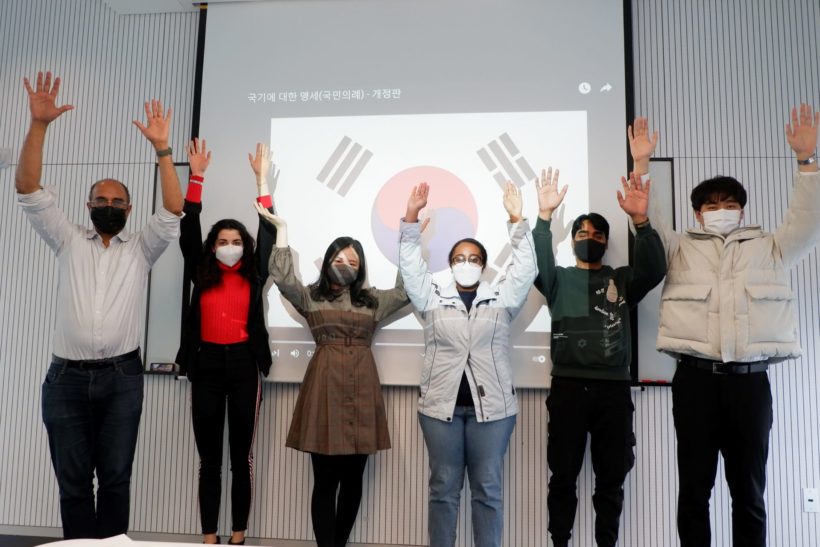 Kalkidan Miheretu, a team leader in the organization and Ethiopian student at Korea University in Seoul, invited the participants to stand to show reverence for the heroes who sacrificed their lives for the independence and freedom of their beloved country from oppressors. This was followed by a moment of silence for the Ukrainian people who are being invaded by the Russian army. 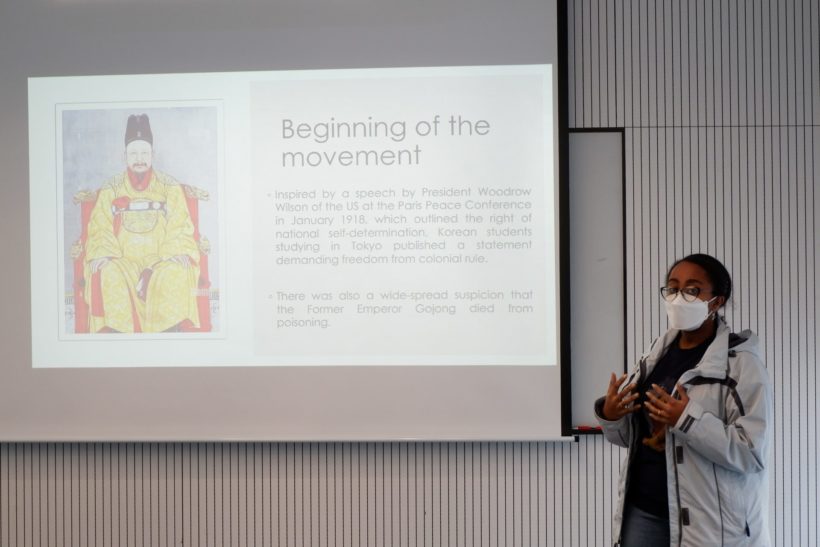 Kalkidan, in her interesting presentation about the March 1st movement’s historical significance for the Koreans’ modern nationalism, reminded us of the historical background of the occupation and the long struggles of the people afterward. The presentation highlighted how the sore relationships of the two countries ended, After years of war, Korea was annexed by the Empire of Japan in 1910. The war on Korean culture continued even after the annexation. Schools and universities forbade speaking Korean. It was declared a crime to teach history from non-approved texts. Authorities burnt more than 200,000 Korean historical documents as an attempt to wipe out the historical memory of Korea. Manual labor and loyalty to the Emperor were emphasized. There was also a widespread suspicion that the former Emperor Gojong died from poisoning.

It was noted that the movement was inspired by a speech by US President Woodrow Wilson at the Paris Peace Conference in January 1918, which outlined the right of national self-determination. Korean students studying in Tokyo published a statement demanding freedom from colonial rule.

On March 1st, 1919, at 2 p.m., 33 activists who formed the core of the movement convened at the Taehwagwan restaurant in Seoul. They read out loud the Korean Declaration of Independence which was drawn by historian Choi Nam-Seon, signed the document, and sent a copy to the Governor-General.

After reading the declaration, the movement leaders phoned the central police station, informed the police of their actions, and were publicly arrested afterward.

Here is a translation of the declaration they made:

“We herewith proclaim the independence of Korea and the liberty of the Korean people. This we proclaim to all the nations of the world in witness of humane quality. This we proclaim to our descendants so that they may enjoy in perpetuity their inherent right to nationhood. In as much as this proclamation originates from our five-thousand-year history, in as much as it springs from the loyalty of twenty million people, in as much as it affirms our everlasting liberty, in as much as it expresses our desire to take part in the global yearning for the advancement reform rooted in human conscience, it is the solemn will of heaven, the great tide of our age, and a just act necessary for the co-existence of all humankind. Therefore, no power in this world can obstruct or suppress it!”

Starting in Seoul and soon spreading throughout the entire country, it was considered a turning point in Korea’s resistance movement since it caused the staging of nationwide anti-Japanese rallies. The suppressed anti-Japanese feelings of Koreans were released in one great explosion, and mass demonstrations took place in many parts of the country, forming the largest national protest rallies against foreign domination in Korean history.

About 7,000 people were killed by the Japanese police and soldiers, and 16,000 were wounded. 715 private houses, 47 churches, and 2 school buildings were destroyed by fire. Approximately 46,000 people were arrested, of whom some 10,000 were tried and convicted. Before the Japanese finally suppressed the movement 12 months later, approximately 2,000,000 Koreans had participated in more than 1,500 demonstrations. 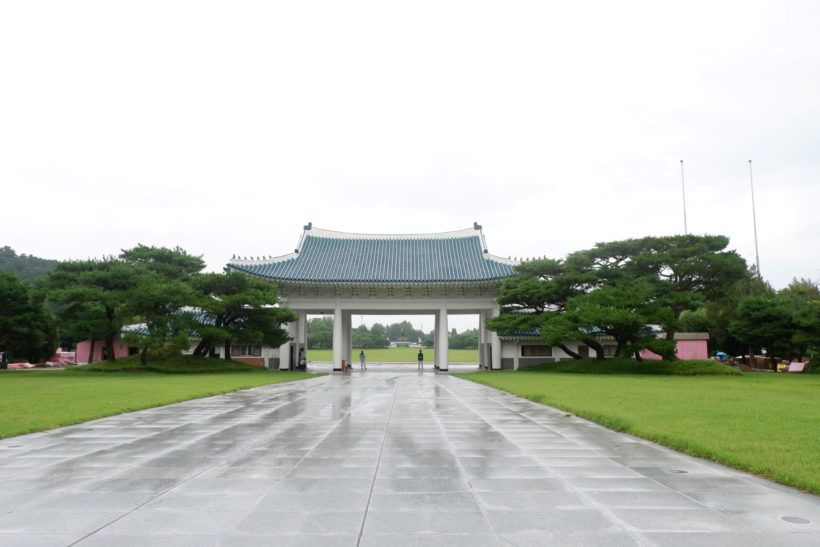 Entrance to the Seoul National Cemetery where the activists are buried.

The presentation noted that, although the movement failed to bring about its paramount goal of national independence, it was significant in the strengthening of national unity, the spread of independence movements in other local governments, and the establishment of the Provisional Government of the Republic of Korea in Shanghai in April 1919 following the exile of Korean movement leaders to different parts of China, where they continued their activities.

On May 24, 1949, the March 1st Movement Day was declared a national holiday in Korea and since then been celebrated by the reading of the Declaration of Independence from 1919 in Seoul’s Pagoda Park, the raising of the태극기(taegeukgi)- the Korean flag in homes, businesses, and institutions and by organizing different parades, concerts, and exhibitions to commemorate the day. 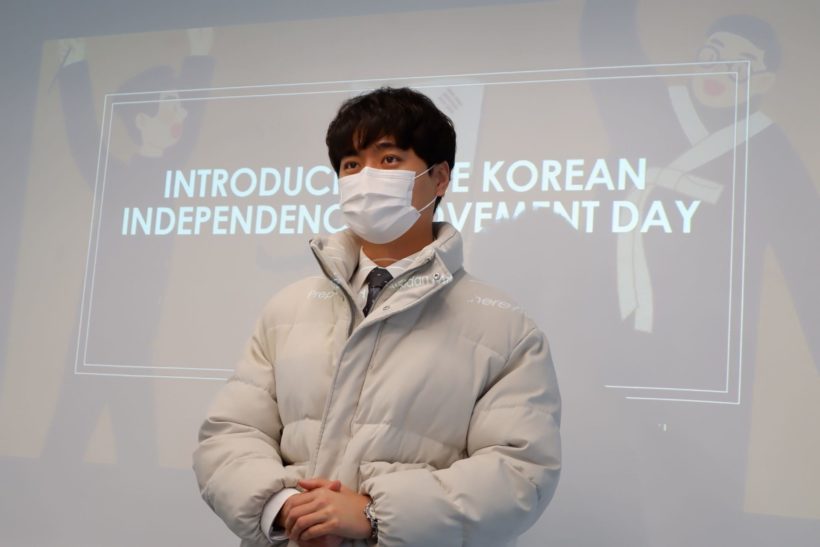 The event was hosted by International World in Korea (IWIK), an international exchange organization made up of foreigners and Korean youth. It was started as a small group in 2012 and currently runs various exchange and cooperation programs through communications with numerous members, locally and internationally. IWIK Representative Sol Kim explained his organization’s mission at the event, that it is striving to promote the spirit of global citizenship through collaborations and exchanges between foreigners in Korea and local youth and fostering cooperation through various volunteer activities. He also added that their organization recently conducted several volunteer activities with foreigners in Korea to spread a positive influence on the society and has strived to strengthen exchanges between Korea and other countries through cooperation with the Korean government, institutions, organizations, broadcast agencies, embassies, and the like.