The free handing over of 12,351 hectares, with an important portion of the Cordillera with strategic natural assets, was formalised through Decree 2138/2021, signed by the governor of Mendoza, Rodolfo Suárez, and the Minister of Government, Victor Ibáñez, on 23 December 2021 and published in the Official Gazette on 7 January. 07/01/2022.

Among the reasons given in the decree, it says: “The firm accredits the realisation of important investments in the land of which it is the assignee, corresponding to the future development of a ski resort”. This means that the lucky individuals benefiting from the solidarity of the Governor of Mendoza would already be installed in the area and in possession of the land.

It is also alleged that they have supposedly bought occupancy permits from settlers, although there are already allegations that the area is included in the survey of native peoples, carried out in compliance with National Law 26.160, as this area is claimed by the Buta Mallín and Pincheira lof, as a grazing area for their cattle and as ancestral occupants of these lands.

There are also allegations that the company El Azufre S.A. has been granted a right to use water from the Valenzuela River (the flow granted is unknown) by the General Department of Irrigation without being the owner of the land, which is unprecedented, since according to the Water Law of Mendoza, this natural resource is inherent to the land.

No environmental study or public hearing

It is a project called “El Azufre”, supposedly a ski resort that they claim to be building or locating in that area of the mountain range, without having carried out or presented any Environmental Impact Study or held any Public Hearing, or made public any project file, which are obligatory instances according to National Law 25.675 and Provincial Law 5961.

The most serious thing is that the Government of Mendoza handed over the property of a sector of the mountain range to a company from Buenos Aires that is carrying out the project, without having previously demanded these obligations established in both national and provincial legislation, and on top of that, it did it for free. In addition to the handover, the official disregard for the rule of law is quite remarkable.

Although the responsibility for this handing over of the territory inescapably lies with the Government of Mendoza, it should not be overlooked that the National Government is aware of the project and has not raised any objection to it, especially considering that the original ownership of the fields called “Potreros de Cordillera” belonged to the Argentine National State and their administration is assigned to the Government of Mendoza. For this reason, it has veto power, both because it is the original owner of the lands that were assigned to the province at its own expense, and because it is a border area. Consequently, the National Government is complicit in these manoeuvres, in clear consonance with the implementation of the extractivist model implemented throughout the territory of the Argentine Nation as a state policy.

On the other hand, a few months ago the government of Mendoza itself rejected the project to build the Punta Negra ski resort, in the mountain range of the Department of Tunuyán (Resolution 141/2011 of the Secretariat of Environment and Territorial Planning), after a disastrous Environmental Impact Study, an unfavourable Public Hearing and having initiated the project illegally before complying with these mandatory instances (no more and no less than what is happening with El Azufre).

This failed project has many points in common with El Azufre, such as the fact that it also belonged to a business group from Buenos Aires, to which the Mendoza government itself had given the fiscal land a few years earlier (in this case not for free, but at a modest price through an official auction). 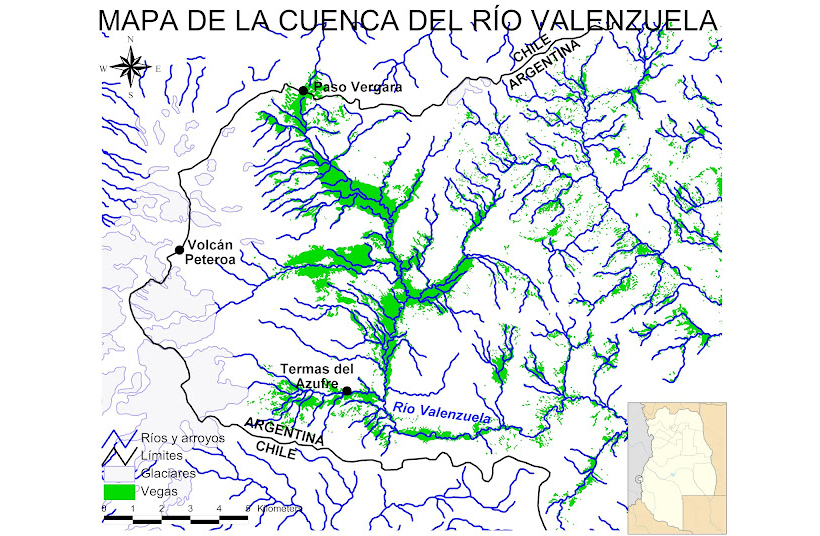 The author’s mapping shows the location of the mountain range area of fiscal land that the Mendoza government has handed over to a Buenos Aires company, and the large number of natural commons it possesses, such as glaciers and high Andean wetlands.

What has just been handed over?

The territory handed over (or ceded, or given away) to the company El Azufre S.A. is located in the department of Malargüe and is almost completely surrounded by Chilean territory, making it supposedly a “border zone” or “national security zone”. It would therefore be essential, in the context of national defence, for territorial sovereignty to be exercised by the specific institutions of the state itself, instead of handing it over free of charge to a business group which, given the economic scale of its project, will surely be quickly handed over to a foreign investment group, as has already happened with the Las Leñas ski resort.

The most serious thing is that this part of the territory that has been handed over contains strategic natural common goods, which nowadays, in a context of global climate change (and its direct local consequence: the water crisis) are of fundamental importance for the life and economy of the population.

The sector of the mountain range is largely covered by glaciers and high Andean wetlands, and also has numerous springs of rivers and streams and even thermal springs.

This is the Valenzuela River basin, one of the most hydraulically active areas in Mendoza, as it has an active surface of 15,000 hectares draining a river with a module of 11 cubic meters per second (m3/sec). To give an idea of the amount of water sources delivered to this private group, the Mendoza River has three times the flow, but its active basin is 40 times larger (590,000 hectares draining a modulus of 33 m3/sec).

Of the 15,000 hectares of active basin of the Valenzuela River, approximately 2500 are covered by glaciers and periglacial environment and 4000 are covered by high Andean wetlands, i.e. half of the territory that was handed over to them. In the first case, this is an area that is protected by National Law 26.639 and cannot be touched. In the second case, it is the largest high Andean wetland in the whole of Mendoza: the vegas, (fertile lands that make up the alluvial plains of the rivers) of Valenzuela, which comprise a wetland of several kilometres in length, made up of thousands of hectares of hygrophilous grasslands and high altitude marshes, and hundreds of lagoons and springs, an enormous source of fresh water.

The Valenzuela river floodplains were studied by professionals from the Directorate of Renewable Natural Resources who technically determined that this environment should be preserved and this was made known in the 2006 Environmental Report and the subsequent 2008 Environmental Plan (the only time that the Government of Mendoza outlined a Biodiversity Conservation strategy). In 2013, a bill to create the Pehuenche National Park was presented in the National Congress, which included the conservation of these territories and was scientifically endorsed by the regional study centres of the Conicet. With this, the territorial vocation of this region is clear and well-founded, given its strategic importance in terms of water and biology, and the fact that its tourist use must go hand in hand with nature conservation and not extractivism, so that the Governor is giving it away to a private group that has not even submitted an environmental report on what it intends to do there.

Instead, there should be a provincial protected natural area or a national park, because that is what science has shown.

The other important detail that is being overlooked is that the place where the supposed city is to be built in the middle of the Cordillera is considered by scientists to be the area with the highest volcanic risk in Argentina, as it is at the foot of the caldera of the Planchón-Peteroa volcanic complex, which has a long geological history of eruptions, some of them major, some of them of catastrophic magnitude, and therefore the area is exposed to the release of toxic gases, lavas, massive tephra fall (solid fragments of volcanic material ejected in the eruption), pyroclastic flows and lahars (flow of sediment and water that moves from the slopes of volcanoes).

The evidence of Peteroa Volcano’s activity and its current risk is widely studied, and continues to be so: there are numerous publications (including at the official level) of the risks that such an eruptive caldera poses to the human population.

El Azufre S.A. is a company that was formed in 2018, based in Buenos Aires and with a share capital of 100,000 pesos. A priceless piece of land has been handed over free of charge to a very new and completely insolvent company.

The owners of the project are no rookies, as they are experienced corporate businessmen: Daniel Alejandro Nofal, Alejandro David Spinello and José Ignacio Beccar Varela are the owners of El Azufre. They are owners of corporate communications companies with global commercial marketing strategies, they are linked to Grupo Clarin and the Beccar Varela family (a well-known oligarchic family from Buenos Aires, which among other things has a law firm dedicated to corporate lobbying and a real estate firm dedicated to large property transactions).

The announced investment is 88 million dollars, money that obviously does not include the value of the land they received for free. That is why, if the project is of the size they are announcing and if it comes to fruition, they will most likely sell it to someone who has that money or can borrow it, plus the value of all that land and everything on it. It should be borne in mind that one of the purposes of El Azufre S.A. is real estate business, according to its articles of association.

By way of a colophon

It happened with the Las Leñas ski resort: an initiative of a group of supposedly visionary businessmen that ended up in the hands of an English corporation, not only the project but also an important sector of the mountain range to which the vast majority is forbidden access because it is “private property”.

The story is a proof of cyclical redundancy and thus is written yet another chapter in the nefarious handing over of the Cordillera, as simple and inconsequential as that, and without anyone batting an eyelid, beyond the odd complaint about a wire fence that prevents access to a mountain lagoon. Because in truth, beyond the occasional handing over, if the public patrimony were properly defended by society, these things would not happen.