The community of Las Barrancas denounces that the mayor of the neighbouring municipality of San Fernando fenced off 60 hectares of communal land, which was used for grazing and as a communal road. After fencing off the land, he started a private monoculture walnut tree plantation, which contaminates the local water with herbicides.

Las Barrancas is a village in the municipality of Pozo de Piedra, in the department of Belén. Some 200 people live in the area and have been dedicated to animal husbandry and food cultivation since ancient times. Many of them pay an annual “grazing fee” to the province’s General Directorate of Cadastre to graze their livestock on community land known as Pampa del Salvial. This 60-hectare property contains plots of land where some neighbours live, roads and a canal that provides drinking water to the population. In 2019, the mayor of the neighbouring municipality of San Fernando, José Figueroa (Frente de Todos), began to use the land for private purposes. The land was fenced off and walnut tree monoculture is currently being developed there. The community is demanding that the land be returned to them and has filed an injunction to stop further work on the property.

The conflict began two years ago, when the mayor of San Fernando, a municipality near Pozo de Piedra and 51 kilometres from Las Barrancas, began to use the community lands. Although for some time the official kept a promise not to deprive the inhabitants of the use of the territory, when the Covid-19 pandemic began – and with it the preventive and obligatory social isolation – he proceeded to close off the land with perimeter wire and wooden posts every two metres.

These tasks were carried out with machinery and employees brought in from the Municipality of San Fernando. On the land, he began to develop a walnut tree monoculture project, with the use of toxic agro-chemicals. Figueroa claims to have a sales contract through his mother-in-law, Teresa del Valle Saadi. “This is the first time that people from outside have come and occupied so much land without any paperwork,” denounce the inhabitants of Las Barrancas.

Not only was the field fenced off, but also the main irrigation channel, an alternative pond, the drinking water cistern, a public road and grazing and animal transport paths were closed off. The impossibility of having a place where the animals could feed themselves meant that many got lost looking for food or died, causing economic damage to the families in the area.

On the other hand, the neighbours denounce that the canal that provides drinking water to the entire community was broken to feed a private pond inside the property. In addition, they warn that, due to the slope, water with herbicides used on the walnut trees drifts into the soil of Las Barrancas, directly affecting the entire population.

“One of the most important points is the use of water. He diverts the irrigation water and takes drinking water for irrigation with the use of toxic agro-chemicals”, denounced Paulina Ramírez, a resident of Las Barrancas, in an interview with Tierra Viva. The situation affects traditions, cultural life, the economy and also the health of those who live in the area. Ramírez says: “Figueroa is a public official who cannot have such large-scale acquisitions, which speaks of corruption and how the political parties support this. The media in Belén don’t want to talk about it.

Enrique Ríos is 33 years old and was born in Las Barrancas. He is also concerned about the use of poisons, an unusual practice among the villagers. “In that fenced-in field they cure the plantations with herbicides, here the people don’t cure with that, and all the water flows into the village. Ríos says that the people who have always lived in Las Barrancas make a living from raising animals in the fields and farming organically. “But because it’s a small town, they want to do what they want,” he laments. 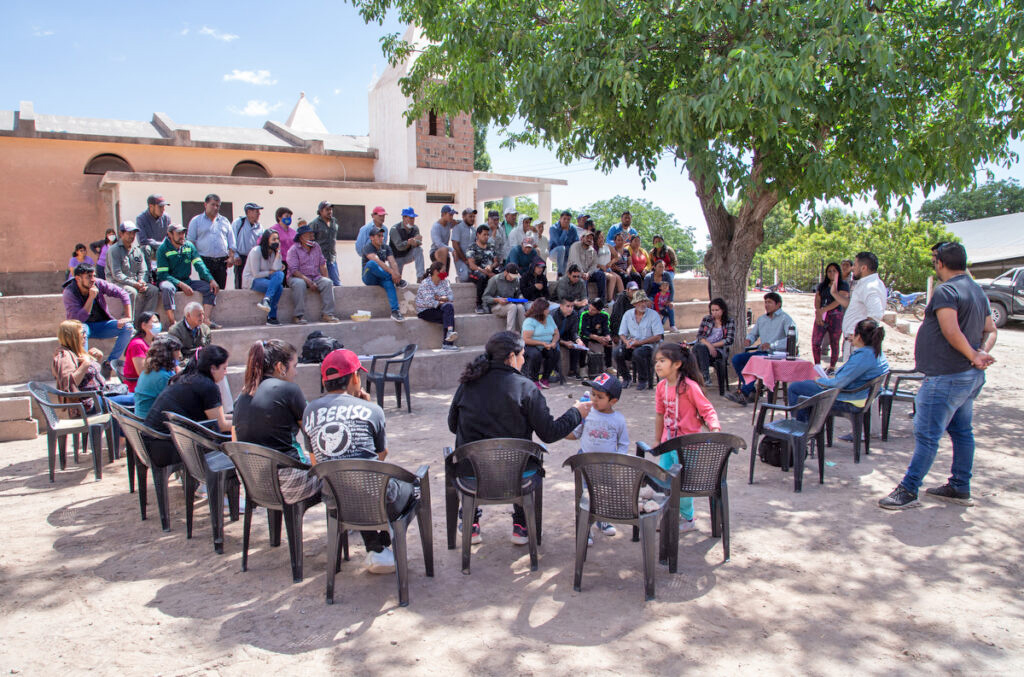 Las Barrancas on the struggle for community lands

Regarding the situation and the response of the people, Paulina Ramírez says: “The people had been telling Figueroa that these were common grazing lands and that he could not fence them off. He gave his word that he was not going to do it and that he was going to leave a way for the people to continue occupying those lands. But he didn’t. Despite the fact that the people began to mobilise to demand what was rightfully theirs, the mayor continued with the work. Ramírez says that 3,000 walnut trees have already been planted, “with the aim of exploiting them for their own benefit”. He also adds another unfulfilled promise by the mayor: to provide work for the local people, something he has not fulfilled either.

In order to be able to use the land and assert their ancestral rights over it, the neighbours built alternative passages to the land. For this, they were denounced and irregularly summoned to testify. As a result, it was the mayor himself who took the situation to court, although he later called for conciliation between the parties. The neighbours decided to go spontaneously to the public prosecutor’s office to assert their right of use and expose the situation they have been living in for two years, as well as the improper behaviour of the Catamarca police and Figueroa.

They also marched in Belén to make the conflict visible. In a meeting, the villagers told this newspaper, the provincial senator for the department of Belén, Jorge Solá Jaís, asked the community not to go to the media or to lawyers and to participate in the mediation. The population filed a precautionary measure against the mayor: they have not yet received any response.

The inhabitants of Las Barrancas also made a presentation to the General Director of Cadastre, Pedro Monferrán. “This gentleman (Figueroa) with total malice aforethought came to this locality and without meeting with the people of the village or any further warning, took possession of an area of 60 hectares, flat land with an extension of two kilometres, which is the largest part of this locality that was used for grazing animals”, they indicated. “Las Barrancas is initiating a permanent plan of struggle to recover and remove this intruder from the place, which by right and culture belongs to us, the Pampa de Salvial field,” said the community during their protests, in which they described the mayor as persona non grata.

The law that assists the neighbours is provincial law No. 3070, which provides for the concept of communal fields for community use. The Civil Association Be.Pe. Bienaventurados Los Pobres, compare what is happening in Las Barrancas with the case of the locality of Amicha in Santiago de Compostela, where after many years the right of common use of a piece of land was asserted. On 18 November, Be. Pe. made a presentation at the Centre for Access to Justice, in support of the villagers. “We have become aware, through members of the community, of the problems caused by the misappropriation and enclosure of the so-called Campo Comunero de las Barrancas or Pampa del Salvial by Mr. José Normando Figueroa”, says the presentation.

“Our organisation has learned through long experience that the difficulties of the peasant sectors in gaining access to property titles are historical, and that these difficulties are taken advantage of by those who enjoy access to and acquiescence in the fictions of the notary and registry system to take possession of land of which they receive no tradition and of which they consequently have no possession whatsoever. This splitting of the real right of ownership between title holders with public deeds and peasants with ancestral possessions, but without title, generates the conflict that is brought to the attention of the courts”, reads the text. 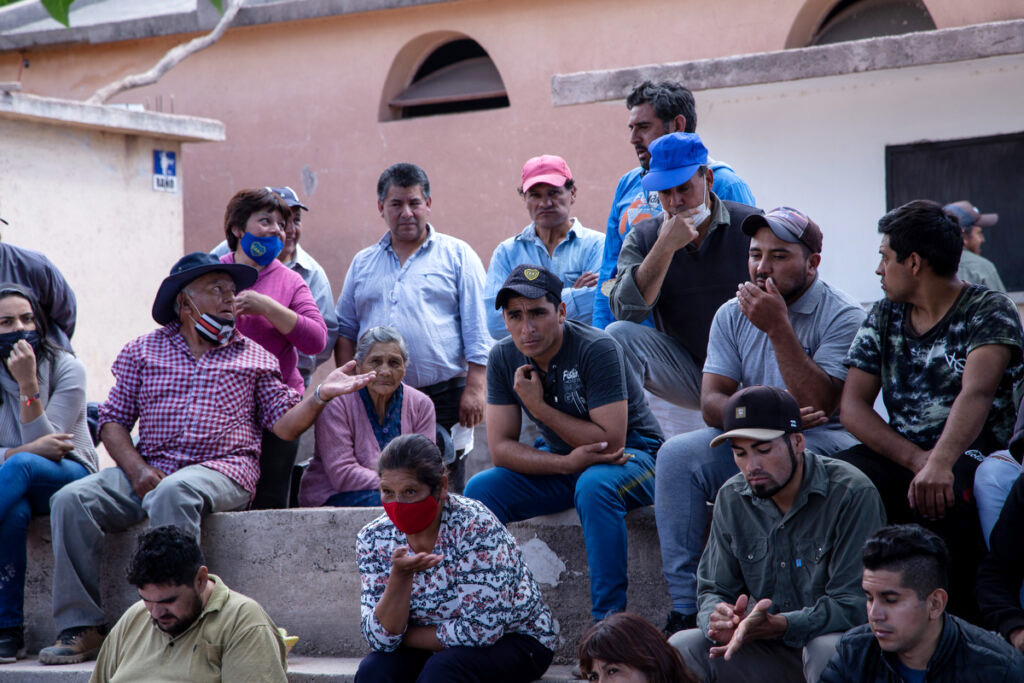 “They don’t have the papers and the people want them to leave”.

The community of Las Barrancas denounces that Figueroa has no control over these lands. “He has no legal or transparent title to the land, but there is a strategy: the more work he does, the more rights he has over the land,” explains Paulina Ramírez. Faced with this situation, the organised neighbours decided to take legal action.

Lawyer Sebastián Vergara, from the Centre for Access to Justice, presented a precautionary measure to stop the work on the site until the conflict is resolved. The document also calls for “the restitution of the property and the reestablishment of the factual situation to the state prior to the criminal conduct denounced” and for an investigation into “alleged crimes against public administration” on the part of the official Figueroa.

Enrique Ríos states: “The situation is very damaging because my family takes their animals to that area, my grandparents have had land and animals there for many years”. Ríos describes the place as “a very nice area, beautiful for tourists”. He says that there are all kinds of animals there: sheep, goats, cows, horses. There is pride in his words, but also sadness: “This is the first time that people from outside have come and occupied so much land without any papers. They have no papers and the people want them to leave.

The interviewee, who is president of the local gauchos’ association, points out how the encroachment is damaging the cultural life of the area. “It makes us angry because it affects us in every way: we used to do yerras there and today we can’t. Those of us who are in the countryside are not allowed to. Those of us who work in the countryside have had our roads cut off to get to other towns or to places where people live that we used to visit with quicker access. And he insists on the importance of these lands being used collectively: “It is also detrimental for people to come and visit.

“Our village is in danger of losing its oldest traditions, as this place was the main source of breeding horses and animals. Today, those of us who in one way or another support the traditions of the people are being subjugated. That is why we repudiate this action and declare this man persona non grata until he leaves the field and frees it”, Las Barrancas said. 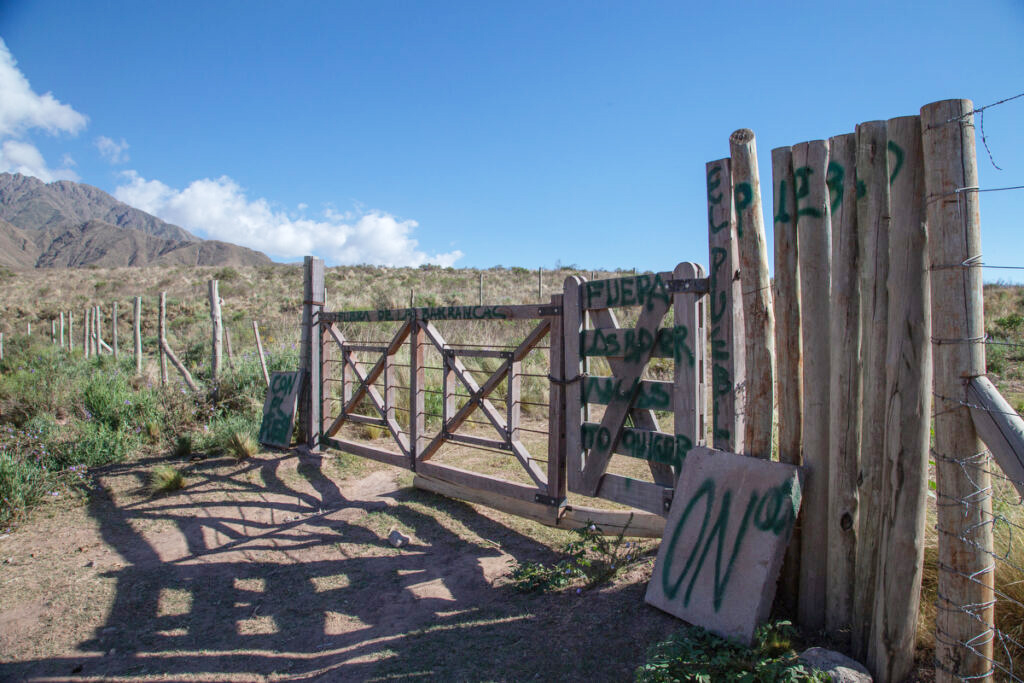