Public reactions against a news item in any newspaper or news channel may be usual in India, but public outrages in digital platforms against the mainstream media outlets for not covering a particular issue is definitely an unusual phenomenon. The Far-eastern Indian State of Assam witnessed such a public fury against some of the editor-journalists for avoiding the press conferences by opposition political parties where they targeted the State chief minister for his family’s alleged land scam.

The organized public uproar in the alternate media was so intense that the celebrity editor-journalists of Assam did not dare to clarify their positions. They preferred to avoid the debates killing time. Shockingly, no media worker’s outfit, civil society groups or readers and viewers came forward defending the otherwise glamourous editor-journalists, when they faced the abusive social media posts for many days.

Assam with over 30 million population supports over 30 morning daily newspapers in different languages along with a large number of Assamese periodicals and magazines. Guwahati also hosts eight satellite news channels (most of them are in the free to air category) with hundreds of news portals. Their cumulative quality readership (and viewership) may reach 3.5 million, but the number of social media users in the State should cross 4.5 million.

The controversy started with a breaking (and elaborate) news, presented by TheWire and TheCrosscurrent in the first week of December 2021, where both the digital media outlets alleged a land-grabbing scam against the family of State chief minister Himanta Biswa Sarma. The content indicated that a real estate company, founded by the saffron leader’s wife, illegally occupied around 18 acres of government land meant for landless farmers.

Based on the specific media contents, three political parties namely Asom Jatiya Parishad, Raijor Dol and the Congress had organized separate press conferences demanding proper investigations into the alleged land scam by the CM’s family. For reasons best known to the editor-journalists of Guwahati-based newspapers and news channels, they did not cover the issue and simply killed the news.

The issue should have died naturally after some time. But a sudden outburst of anti-media posts in the digital platforms surfaced in the morning hours on 9 December. For almost three days, most of the editors were named and shamed for their silence over Sarma’s land grab issue in social media. The news channel’s logos and photographs of some celebrity journalists were made viral with abusive words.

Soon the State legislative assembly began its winter session on 20 December and as usual, the first day’s proceedings were interrupted by the opposition legislators over the issue. They wanted the assembly to discuss it, but speaker Biswajit Daimary did not allow it. Later the opposition MLAs staged a walkout in protest. But shockingly the development was not prominently published by most of the newspapers and news channels.

Assam Congress president Bhupen Bora dared Sarma to clarify his stand on the issue. All the opposition political leaders demanded a probe by the Enforcement Directorate and Central Bureau of Investigation over the alleged land grab by CM’s family. They claimed that Sarma for his personal interest handed over 18 acres of government land worth crores of rupees to his family members without following any rule.

The oldest party of India also organized a press conference in New Delhi, where senior Congress leaders namely Gaurav Vallabh, Jitendra Singh, Ripun Bora and Gaurav Gogoi alleged that Sarma set aside all rules to offer government lands to his family. This time, the issue got national coverage by most of the metro-based morning dailies. At least two news agencies also covered the event.

The Congress leaders (where Bora and Gogoi from Assam) asserted that all unlawful land transfers to the concerned group must be canceled and the alternate land to those deprived landless families should be offered. CM Sarma has not clarified his stand over the matter yet, only alleged that the concerned digital media outlet is Left-aligned (read anti-BJP).

Reluctance for covering such issues by the majority of Guwahati-based mainstream media outlets can be guessed from their dependence on government advertisement revenues for survival. They are lately facing a serious financial crisis since the Covid-19 hit the country. The pandemic resulted in abrupt loss of circulation for newspapers and also commercial advertisement revenues. The news channels also lost their quality viewership drastically.

So, most of the newspaper managements today cannot go against the government policy even if it becomes necessary for sustaining its credibility. Thus, slowly they have turned out to be official organs of the ruling party (read the aggressive chief minister). They are not even confident of getting adequate support in need from their valued readers across the State.

But the question that arises is, why would the readers believe in these media outlets when most of them run their media business enterprises for selfish interest only? They have made it a habit to create news out of nothing even though it may go for character assassinations of many individuals. Moreover, when the affected parties try to clarify their positions, the editor-owners prefer to ignore their views, as if the media fraternity is in no way accountable for that.

Personal corruption of some well-known editors also added complications to the situation, where public goodwill towards the media fraternity continued to erode. A senior Assamese journalist, who has been in the profession for more than three decades, recently made a sensational social media post claiming that at least seven editors (of city-based news channels) possessed more wealth than they can actually earn legally from their jobs. 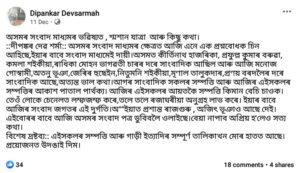 Speaking to this writer to confirm the post, Dipankar Devsarmah lamented that because of some greedy editor-media owners the media industry has lost its credibility (whatever is left). Talking about naming the editors in the post, Devsarmah asserted that it may be unpleasant for many, but it’s true. He even made a declaration in the post that all details about the said editors’ properties and luxury vehicles are with him and would make it public in need.

Motivating news is also synonymous with many Assam media outlets. The readers-viewers could remember that a dramatic news item was circulated among the Guwahati-based newspapers and news channels in March 2020 narrating a fake story about an outgoing secretary of a journalists’ club burning down many documents. Amazingly, the concerned secretary was present on the occasion when the so-called burning took place, but no reporter dared to ask him for reactions (they definitely knew that it was a fabricated item).

Probably, the readers-viewers too did not believe in the content. Hence, even after it was published by most of the newspapers and news channels from Guwahati, the secretary faced not a single question when he roamed around a city’s crowded market the next morning. His relatives, friends and well-wishers remained indifferent to it. So, the issue died naturally. Nonetheless, the media outlets tried their best to defame him. Now the question that arises is, if a seasoned journalist can be targeted by the media in such a way, would they spare an ordinary citizen!