On the occasion of the recent death of the writer Almudena Grandes, we have read numerous articles and obituaries paying tribute to “the narrator of the memory of the forgotten”, a clear reference to the series of novels dedicated to the Spanish Civil War and the anti-Francoist resistance under the title Episodios de una guerra interminable, the literary project on which the author was working throughout the last decade of her life. 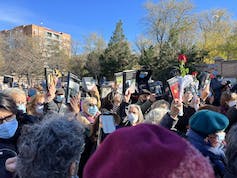 This fundamental contribution to the recovery of the Spanish resistance memory has been one of the most highlighted and praised aspects in the tributes dedicated to the figure of one of the most important narrators of Spanish literature.

But this has not been the only one. In her novels, Grandes has not only vindicated the anti-fascist struggle that remained active for several decades after the Republican defeat, but her literature has also been characterised by her vindication of women’s active participation both in war conflicts and in care work.

The latter has been systematically invisibilised because it belonged to the rearguard and because it was a feminised task, and yet it was fundamental, as it was what made open confrontation possible. For this reason, we can consider that one of the legacies of the writer from Madrid is to give back their rightful place to the women who fought alongside the men.

An affiliative memory: the historical and narrative proposal of the Episodes

Immortal history does strange things when it meets the love of mortal bodies”.

This is the thesis of the first novel in Grandes’ memoir cycle, and it functions as a kind of mantra that seeks to respond to the apparently irrational decisions that great figures in twentieth-century history made that affected the lives of grassroots militants.

However, this phrase also serves to understand Grandes’ bid for remembrance in which women play a primordial role, as they are the ones who created and sustained these fundamental networks to guarantee the possibility of resisting Franco’s regime and to sustain life even in the most adverse situations.

History of affection, the complexification of the narrative of memory

By choosing women and their networks of care as protagonists, Grandes introduces a series of questions that help us to approach the development of the war and its consequences in a more complex and diverse way.

By focusing on personal relationships, she manages to show a range of victims who are not always part of the wartime imaginary: the rearguard in exile, people from the LGTBIQ+ collective, those affected by post-war misery, orphans exploited in institutions controlled by the clergy, patients in mental hospitals, urban and rural links, and a long etcetera.

The series Episodes of an Endless War. Twitter / Almudena Grandes

In the same way, and thanks to the perspective chosen, the portrait of defeated Spain is not reduced to suffering and poverty but to the whole network of support, care and resistance that was created on the margins of Franco’s society.

Thus, the traditional discourse of a fratricidal war is overcome in favour of a more real and fairer conception of the conflict, which takes into account the different factors that intervened in the development and final outcome of the conflict. In short, the war and the dictatorship presented to us in Episodes of an endless war correspond to historical moments in which economic, political, gender identity, sexual orientation, class, etc., issues cannot be separated.

The writer from Madrid has stood out, among other things, for her commitment to the Spanish memorial movement. In this respect, her narrative production has not only echoed her personal involvement but also constitutes her main contribution to the country’s collective memory.

Beyond the importance of the type of narrative he promotes and the social impact his novels have had, it is worth highlighting what the appearance of a cycle such as the Episodes in 2010 meant. Despite the fact that since 2000 what has been called the “memory boom” was taking place, i.e., a cultural explosion of interest in the historical memory of the Spanish Civil War that materialised in the publication of a huge number of novels, film premieres, music, plays, etc., by 2008, due to the global economic crisis and the havoc it caused, attention was redirected towards the extreme situation that was being experienced at the time. The memory and wounds of the past were put on the back burner.

At the same time, in 2007, a text was published that predicted the end of the “memory boom”, due to the “weariness” that was being produced by the conventionalisation of the type of war narrative that had been imposed. We are referring to Isaac Rosa’s ¡Otra maldita novela sobre la Guerra Civil! by Isaac Rosa, a sort of homage to Cortázar’s anti-novel, which literarily destroyed the novel of memory by claiming an uncomfortable remembrance that would serve to mobilise the reading public to join the memorial movement that was fighting for the restoration of dignity to the victims of repression. 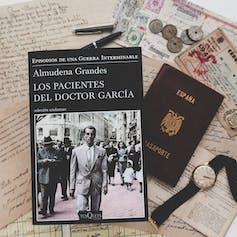 It was in this context that Almudena Grandes’ books appeared. Long, complex and choral novels that proposed a look at the war that encompassed all the victims, and also all the people, men and women, who fought to put an end to Franco’s regime.

In short, Episodes of an Endless War not only revitalised a literary trend in decline but also brought to the centre of the debate the need to recover the stories of the forgotten, of the inhabitants of the margins.

There is a before and after her novels because, after the resounding success of Grandes, it is undeniable that there are still many stories of the war and the resistance left to be told and that the history of women is still incomplete.