The name of Martín Cruz Feilberg is currently making the rounds of all the local media in Chubut and Río Negro, including the national media in Buenos Aires. This man is accused and charged as one of those responsible for the murder of Elías Garay, the young Mapuche who was shot in the chest, at point blank range, inside the lof Quemquentreu, in Cuesta del Ternero, El Bolsón (Río Negro). But who is this man? What links does he have with arms and security companies? What is his relationship with the forestry and mining industry?

In the official bulletin of 12 July 2019, the name of Martín Cruz Feilberg appears together with that of Salvan Irene Ester, as founding partners of the company General Simón S.R.L., a company that in principle presents itself as a forestry company, but which, on closer reading, offers a list of services that is strikingly endless: forestation, reforestation, clearing, felling of natural and artificial forests; transport of loads, materials in general, freight, haulage, removals. “It may carry out all types of financial operations directly or indirectly related to the above-mentioned activities. “Purchase, sale, wholesale and retail, import, export, representation, consignment, and distribution of clothes, garments, uniforms, clothing and accessories, fibres, fabrics, yarns, and the raw materials of which they are composed”. And the list goes on. How did a man like Feilberg obtain such a business opportunity? Who is he and what other companies does he have links with in the province of Chubut? Does he have direct links with the political caste of Rio Negro? Are these links what enabled him to obtain this promising business approval? Can anyone obtain the right to cut down natural forests? 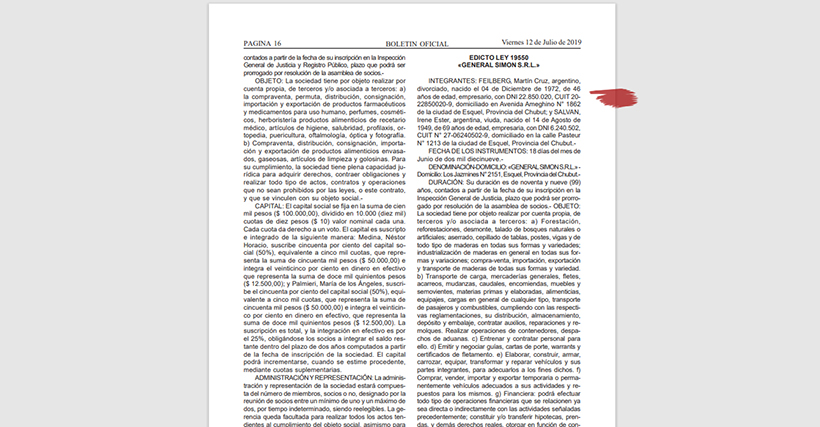 However, despite this insurmountable offer that Martín Cruz Feilberg received in 2019, his facebook page does not have many publications, nor contacts, and it appears to be a poorly elaborated site, without any kind of communication strategy, as if he had never invested time and money in his project. Specifically, like the Rocco brothers, Feilberg and Galvan made, as stated in the official bulletin, an investment of 50,000 pesos to be paid in five easy instalments. All suspicious data. 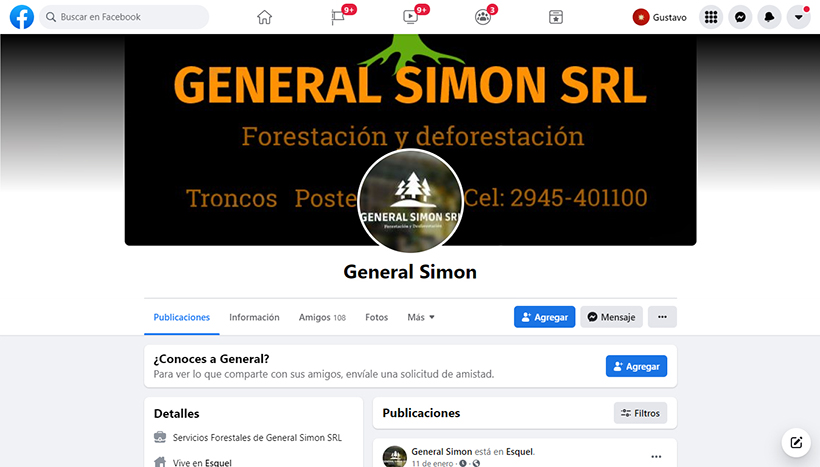 On the other hand, Martín Cruz Filberg appears in two official bulletins on arms registration in 2014 and 2016, working for the security companies Zeus Seguridad S.R.L and Grupo Teamseg S.A. respectively. Strikingly, these two companies are security, surveillance and monitoring companies, located in Buenos Aires. 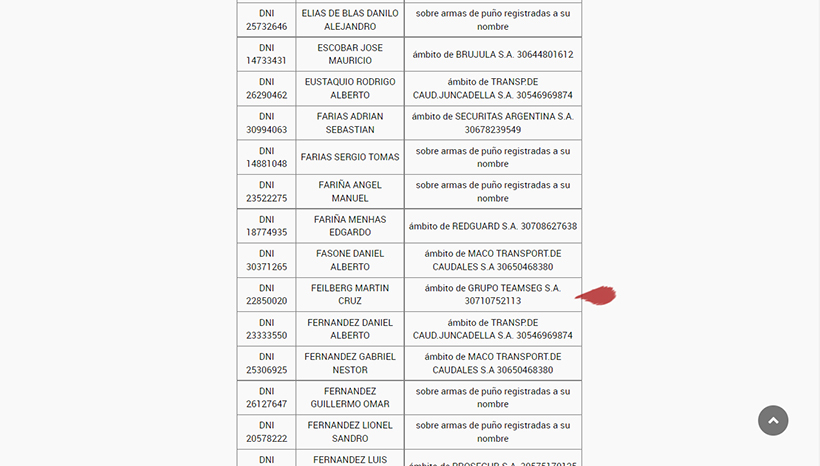 All this information is corroborated by Martín Cruz Feilberg in his personal accounts on LinkedIn, Instagram and Facebook, where in the case of the former he mentions Grupo Teamseg S.A., General Simon S.R.L. and a third company called Alma Fuerte S.R.L., where he presents himself as managing partner (2002 – 2006). In this same social network, one can see a current profile photo of Martín Cruz Feilberg and how, in each of his posts, he expresses and reinvokes his relationship with and “liking” for the extractive industry, specifically the mining industry in the south of the country. Feilberg mentions the companies: Pan American Energy, ArcelorMittal Acindar, Minera Alumbrera. Groups: contactoMinero.com, Mineros en Red. While his skills include the words: contract management, negotiation, project planning. 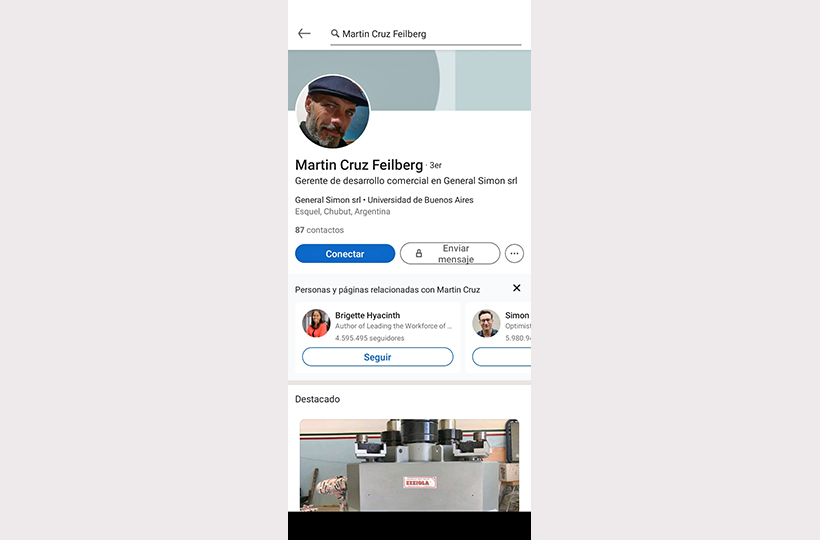 On the other hand, on his Instagram you can find not only pages related to weapons, but others with a fascist tone where you can read phrases in English, with multiple weapons of war and the face of Donald Trump. 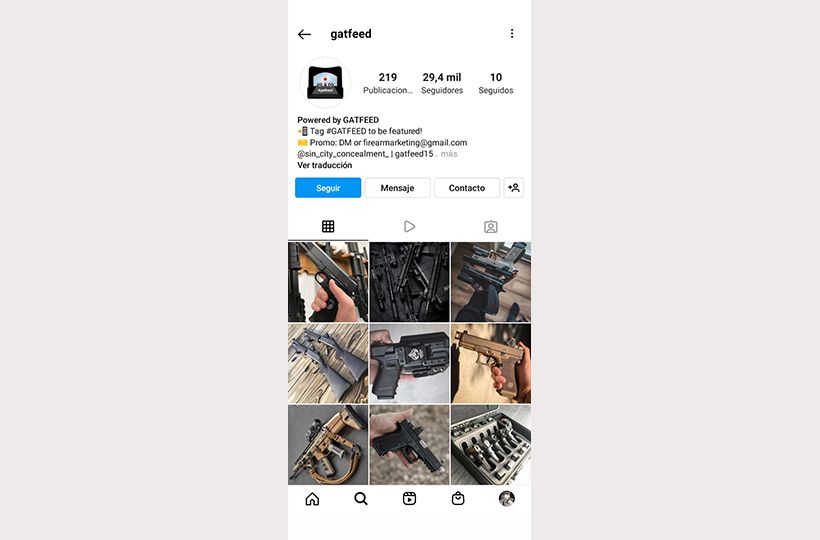 Something that ends, contributing to defining a very specific profile of a person, when Feilberg boasts of being, through a Facebook post, a murderer. A fact that is further deepened by two other users of this network, with whom they exchange opinions and points of view on who it would be good to eliminate from this society: “I have no pity for social trash (thieves, rapists, murderers)”, adds one user to Feilberg’s “murderer” post. 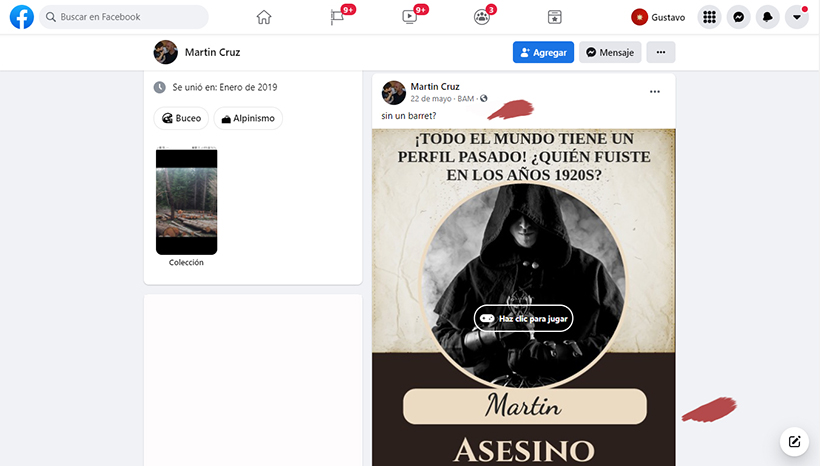 Undoubtedly, an extremely dark profile, but at the same time clear and evident, of a person who acts convinced that there exists in society a group of people who can be extirpated, exterminated, reduced. And that he, as a person, has the right to extirpate this life from society. He says it, exposes it and repeats it on his social networks. A profile of person that unfortunately abounds in our society and tends to massify. That is why, in this case, if his real guilt is proven, if Gonzalo Cabrera himself recognises him as one of the co-authors of firing two shots at him and a third shot in the head at Elías Garay, which killed him almost instantly, the people who share this way of thinking and this view (not only those who exchange messages on Facebook, but also the “gauchos” who want to make the Mapuche in El Bolsón their homeland) should seriously reconsider what is the factual and real basis for thinking in this way.

On the other hand, and considering Feilberg’s complex profile, it is prudent to ask, what was the motive that motivated him to commit this murder? Was it a strictly economic and strategic interest, given that the lof Quemquemtrew community initiated a process of territorial recovery in a space that this businessman uses as part of the forestry industry? Or did he act as a hired killer for someone else? Was this man really a forestry businessman, could he survive economically in this area? Or was he motivated by uncontainable racism? Or were all these motives present at the moment of opening fire, at close range, together with Diego Alejandro Ravasio, against Elias Garay and Gonzalo Cabrera?

The next few hours will be decisive to find out if these two men are really responsible for the murder of Elias Garay and the wounding of Gonzalo Cabrera. In the same way, they will be crucial to know if they acted alone, or if they are the material authors of an act that compromises more people, the possible intellectual authors of a crime that hides multiple and unquantifiable economic interests.