Article II, Section 6 of the Philippine Constitution states that the separation of the Church and State is inviolable. The principle first appeared in the Malolos Constitution of 1899 which was later on sustained in several amendments. Framers must have seen that religion and government are the two strongest forces in the country and might not avoid a disturbing, monumental clash in time.

The 1986 People Power revolution put it to the biggest test. It took the leader of the dominant Catholic church (Jaime Cardinal Sin) to call on the Filipino people to go to Metro Manila’s main highway (EDSA) to support the top two military officers who declared a break from the dictator Ferdinand Marcos who had served as elected president for eight years and then, to stay in power, declared martial law (which went on for 14 years). In four days of vigil on the highway’s stretch between two military camps, among the hordes were nuns who faced army tanks with their rosaries and priests who said masses in open fields over which fighter planes were flying. The historic event resulted in democracy restored, the recent widow of the assassinated nemesis of the dictator installed as the first woman president (Corazon Aquino), and the Marcos family exiled to Hawaii. 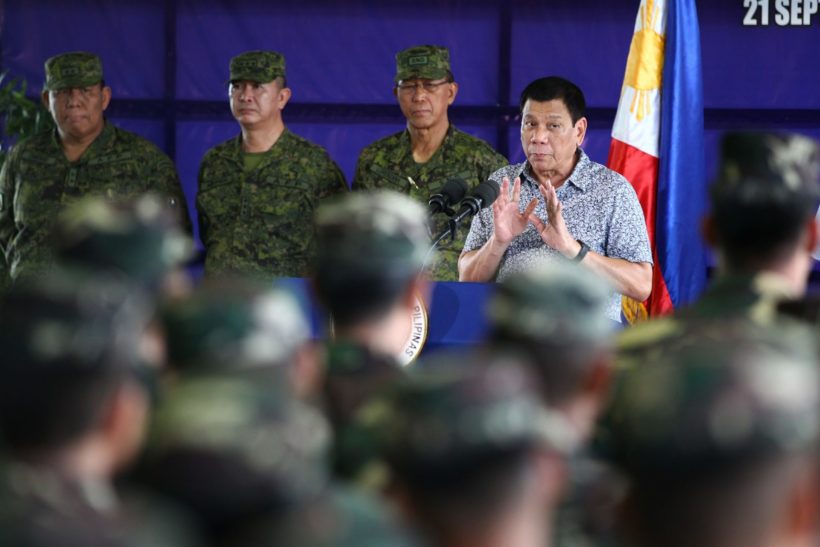 Rodrigo Roa Duterte is the 16th president of the Republic of the Philippines from June 2016 up to June 2022. Photo Credit: Wikimedia Commons.

The coming national elections in May 2022 again draw the Church into the role of political shepherd. In fact, the Catholic Bishops Conference of the Philippines (CBCP) has been on watch since the first year of President Rodrigo Duterte’s term in mid- 2016, when he started habitually speaking dirty and cursing/demeaning people who made critical comments, among them opposition politicians, media institutions and their journalists, other state leaders like POTUS Obama, the Catholic clergy and churchgoers in the country, Pope Francis, and even God whom he called stupid. Issues hurting the prelates hardest included human rights violations especially the bloody extra-judicial killings as the method of the new government’s centerpiece drug war program; weaponization of the law like the anti-terrorism law (where threats and actual apprehensions have been made); and the use of unprecedented foul language, bad jokes, blatant lies, even an army of trolls that offend educated and conservative citizens and are feared to corrupt the vulnerable youth.

Provoked, some priests, senior to young, have chosen to set aside sacred silence and lace their homilies with some vitriol. The eloquent Archbishop Socrates Villegas, former CBCP president, said in his homily on the Feast of Christ the King, November 21: “Clergymen can voice support for politicians and should speak out against social sins like poverty, graft, and corruption, especially when the ignorant and the poor are exploited by politicians. And when nationalism and truth are threatened, clergymen must speak against evil.“ (UCA News, Nov 22, 2021). That somehow clarifies the separation of church and state. 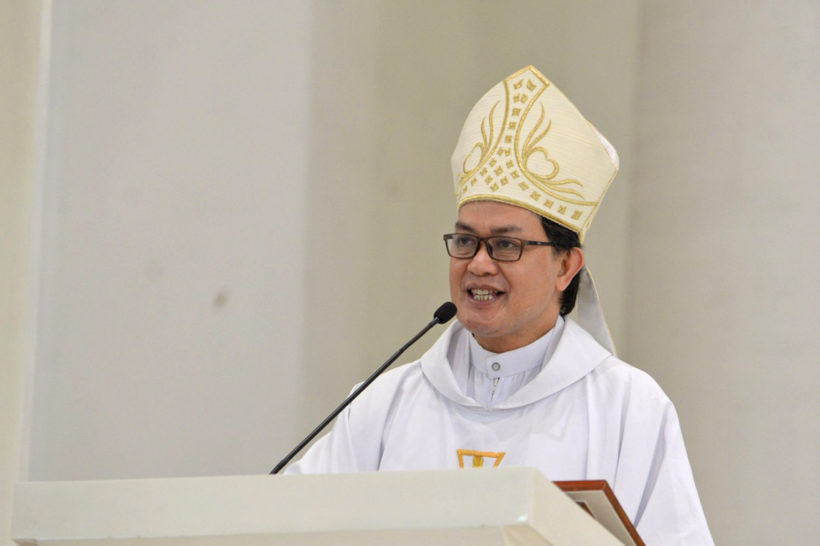 Pablo Virgilio David, 62, Bishop of Caloocan in Metro Manila, and earlier parish priest in his province of Pampanga, is the new president of the Catholic Bishops” Conference of the Philippines, from December 1, 2021 to December 1, 2023. Photo credit: CBCP news website.

Archbishop Pablo “Ambo” David, president of CBCP for a two-year term effective this December 1, has a litany of stinging tirades against Duterte’s bloody and extra-judicial anti-drug war, that can be summed up in this: “the drug war is raw evil.” And recently, the reputed most learned theologian said directly to the faithful, “Don’t call yourselves Christians if you don’t vote trustworthy candidates.” (Inquirer.net, Nov 19, 2021).

Fr. Jett Villarin, SJ, former president of Ateneo de Manila University, in a Sunday homily this year, gave a piece of simple but striking advice on how to choose the next leaders: “Follow the Commandments. Do not kill. Do not steal. Do not lie. And the list of choices will be shortened (the last line in native Tagalog).

Bishop Broderick Pabillo, on candidates who portray themselves as pro-poor: “Don’t believe them… they cannot do anything for the poor if we continue to have a government that takes advantage of the poor especially in times of a pandemic.” (Interaksyon, Nov. 11, 2021).

All this heat from the Church, and the general mood in the social media and the streets, could have last week inspired the Catholic Bishops Conference of the Philippines (CBCP) to endorse the prayer from the Parish Pastoral Council for Responsible Voting (PPCRV) for peaceful, credible, and transparent elections. Called “Prayer for 2022 Elections,” written by Archbishop Soc Villegas, it was first recited in some masses this Sunday (November 28) and from hereon, to be sustained every first and third Sunday till just before the May 9 election. “The prayer is similar to the Oratio Imperata (currently for protection against Covid-19) but its focus is on the 16 values enshrined in the preamble of the Constitution.” said outgoing CBCP president Archbishop Romulo Valles in its circular. The prayer seeks delivery from coercion, intimidation, violence, terrorism; dishonesty, lies, and all distortion of truth; bribery, graft, and all conspiracy for fraud; from gullibility to the deceptive and blindness of perspective; from threats, intimidation, and perverse language. (Circular, election prayer, homilies where writer drew excerpts are in the CBCP website and cited media outlets.)

Such dissonance between church and state has understandably peaked as the coming election is a make or break for the Philippines. Authoritarianism versus democracy; pro-Philippines or pro-China (the invader allowed to creep in by the present government); massive financial resources and machinery of two “dynasties” (Dictator Marcos’s son a frontrunner for president; Duterte daughter for vice-president, and the rest of the two families in the local election races) against volunteerism or people’s campaign (for Vice President Robredo); truth vs fake news.

Historically, many Catholics among their 83% portion of the population, still strictly adhere to the principle of the separation of church and state, that the church should not meddle in political affairs. In the real world, in the rough-and-tumble realm of politics, something else may however glitter more brightly to the bulk of voters, the DE socio-economic classes. Moral versus political: the May 2022 elections will tell which prevails in the dissonant voices.