In the photos below we can see Sandra Décima and Alejandra Vittar from La Comunidad para el Desarrollo Humano, together with Laura del Valle Romano, Universal Ambassador for Peace and in charge of the Defensoría de Géneros, Pueblos Originarios y Derecho Animal, Francisca Cornejo from the Fundación Señales and Rosa Zuleta from the Área de la Mujer de Cerrillos. 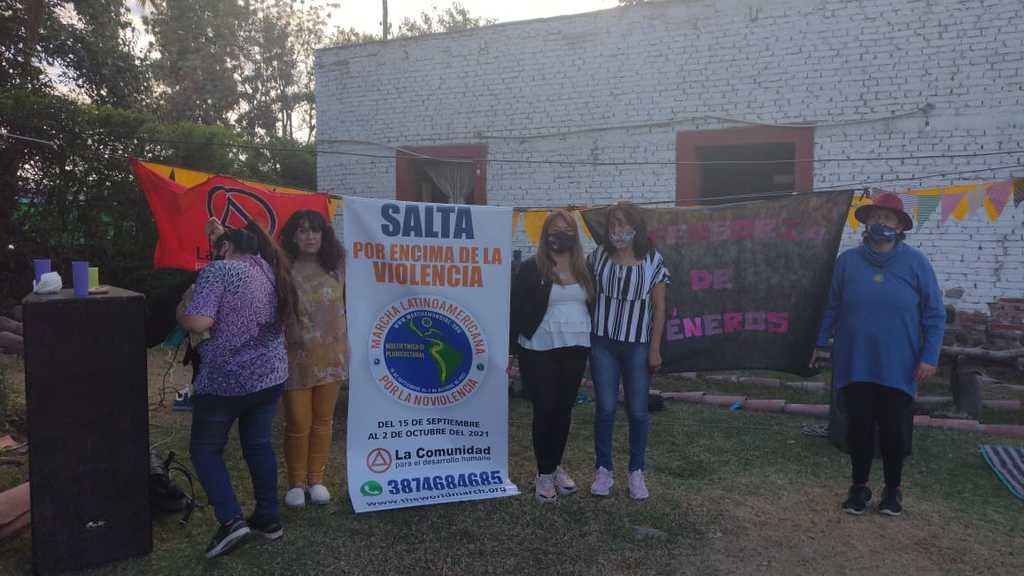 On the 22nd an interview with Maria Angela Masa of the World without Wars and without Violence team was broadcast on “Radio Prensa” of the Tucumán press union.

On September 23rd the San Rafael Park of Study and Reflection joined the Latin American March for non-violence.

On September 24th we all followed the rhythm of the Spring Festival at Club Primavera in B° Villa Primavera, organised by community operators, La Comunidad para el Desarrollo Humano and comisaria octava Salta.

On the 25th, on the other hand, there were several events that we can highlight:

The Conversatorio Intercambio de la Red de Pueblos Originarios del 5to Foro Humanista Latinoamericano in the framework of the Latin American Multiethnic and Pluricultural March and towards the International Forum “Towards a Nonviolent Future in Latin America”.

Likewise, in Cordoba, in the Humanist House, a Painting allusive to the Latin American March for Nonviolence was made.

Finally, on the same day, the Latin American March was presented and participated in the Seasonal Celebration of Spring in the Park of Study and Reflection Paravachasca.