As President Andrzej Duda addressed the 76th session of the General Assembly of the United Nations, activists rallied outside in Dag Hammarskjöld Plaza for human rights in Poland. The activist coalition held Pride flags and stark images of the victims of police violence and anti-LGBT policies in Poland.

“We have gathered here outside the UN to denounce the relentless violation of LGBTQ and women`s rights. Over the last year in Warsaw, I have witnessed systemic violence by police and right-wing hate groups. These graphic images portray my bloodied and beaten friends. The current suppression of community protests and rallies reflects the repressive policies of the PiS regime led by President Andrzej Duda.” said Polish-American activist Ronald Kraszewski, while displaying his Homokomando armband. Homokomando is a grassroots sports and human rights organization at the forefront of LGBTQ activism in Poland.

Fay said “The rainbow is an ancient symbol of hope as well as a universal symbol of equality and justice for the global LGBTQ community. Mary is the universal Mother of ALL humanity- including LGBTQ persons.”

Fay said, “People around the world are shocked at the rise of homophobic prejudice and anti LGBTQ violence in Poland. Villages and towns have been declared ‘LGBT free zones’. LGBTQ persons have been forced to flee their homes and their homeland. I honor the courage of Polish LGBTQ leaders and allies who refuse to be intimidated and continue to advocate for human rights and equality. As we rally for LGBTQ human rights in Poland we honor transgender community pioneers including Anna Grodzka, Ewa Holuszko and a new generation of young leaders who are on the streets of Poland advocating for the human rights of LGBTQ persons, women and refugees.”

Fay first connected with Polish activists after images of his wedding with husband Tom Moulton were used in an anti-gay television address by the late President Lech Kaczynski in March 2008. He has returned many times – most recently in 2019 where he spoke at rallies in Warsaw and in Bialystok following a series of brutal anti LGBT violent assaults .

Catholic leaders have also fueled the violence. In an August 2019 homily, Archbishop Marek Jedraszewski in a homily attacked the LGBT movement. “The red plague is no longer widespread in our country. But a new plague has appeared, a neo-Marxist, who seeks to seize our souls, hearts and spirits, a plague that is not red but rainbow.”

President Duda has echoed this sentiment in a Brzeg campaign speech. He denounced the LGBT civil rights movement as more dangerous than communism saying he agreed that “LGBT is not people, it’s an ideology.”

Standing outside the United Nations among diverse groups calling for human rights in Haiti, China, Iran and Black Lives Matter activists, Fay said, “We are the people of the United Nations. We’re urgently finding new ways of being human together. We have a human responsibility to speak out in the face of hate, prejudice and violence. We raise our voices. We love more openly and express our queer solidarity more visibly. To President Duda – we say welcome to New York, the place of the Stonewall uprising! Welcome to the United Nations, birthplace of the Declaration of Human Rights! To the LGBTQ communities of Poland we hear you. We thank you for your inspiring courage and we send our love and our solidarity.”

In a message of support to the activists, renowned Polish Documentary filmmaker Piotr Piwowarczyk wrote “I would like to express my solidarity and gratefulness to the participants in today’s rally at the UN. As a proud Polish gay man I thank each of you for bringing international attention to the discriminatory policies of the current Polish government and President Duda. Your presence today on behalf of human rights is proof that the world is watching the anti-LGBT policies of Polish authorities and condemns them with full force as undemocratic and against human values. Long live democratic Poland and its allies!”

“At the rally today, I was reminded of growing up in Poland as a young gay man. I hardly imagined that one day I would live my life fully, and happily in New York City with my fiancé, planning my wedding. I want this happiness for today’s queer youth in Poland.” said Piotr Kajstura, Polish filmmaker, who currently works with LGBTQ youth of the Polish diaspora in NYC.

Organizer Kraszewski explained, “Following the rally, we delivered a letter to the Polish Consulate condemning Human Rights violations in Poland. The violence must stop and the perpetrators should be condemned by the international community.“ 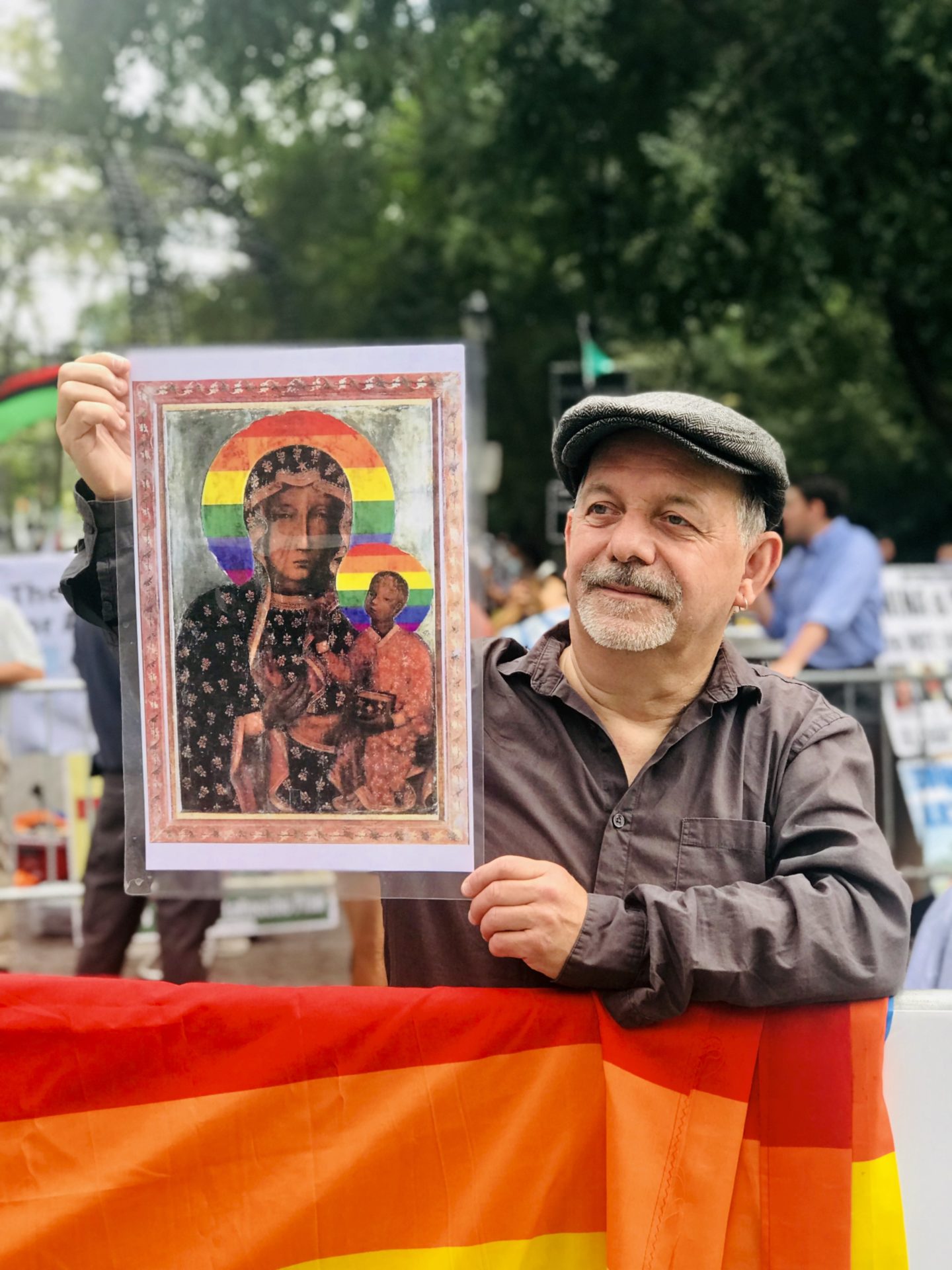 Brendan Fay with image of the Black Madonna of Czestochowa. Fay said “Mary is the universal Mother of ALL humanity- including LGBTQ persons.” 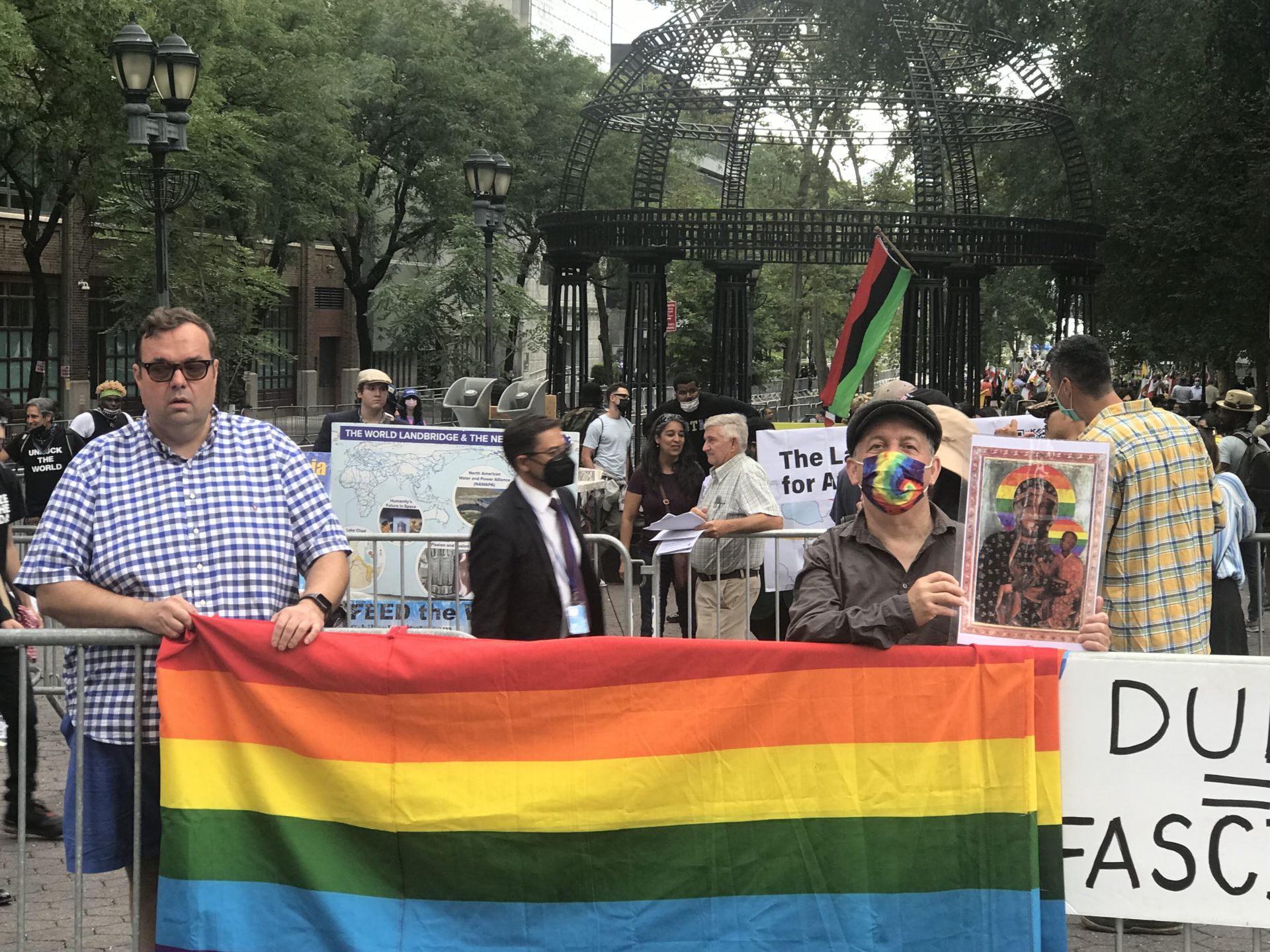 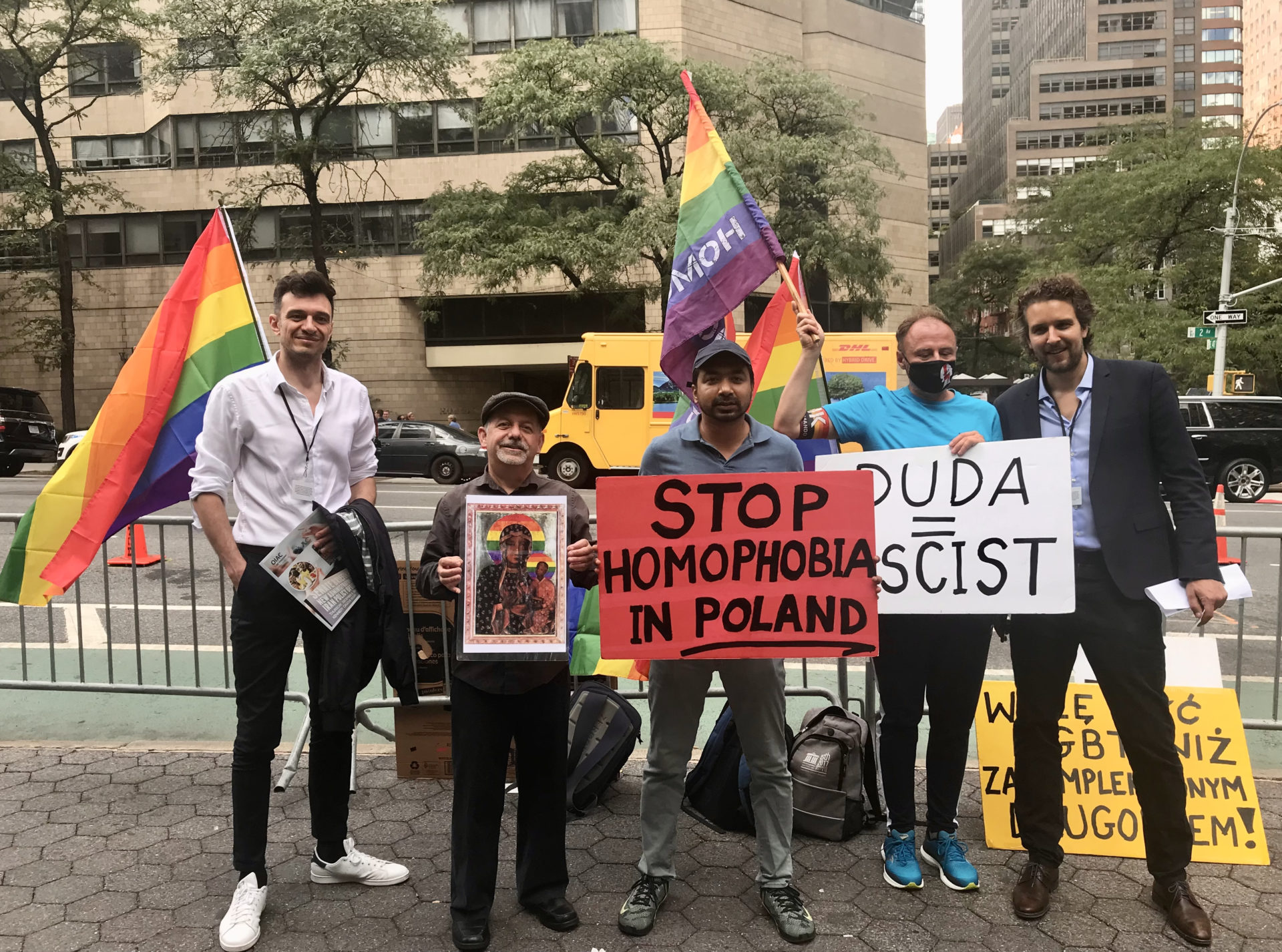 Brendan Fay, Razid Season and Ronald Kraszewski and others rally for human rights in Poland