In a commemoration of the August 6 and August 9, 1945 bombings of Hiroshima and Nagasaki that was both somber and spirited, New York City-based nuclear disarmament advocates assembled outside the Municipal Building in downtown New York City. Advocates joined members of the International Campaign to Abolish Nuclear Weapons (ICAN), 2017 Nobel Peace Laureate in honoring New York nuclear disarmament heroes and urging Council Speaker Corey Johnson to reaffirm NYC as a nuclear weapons free zone.

Dr. Emily Welty reminded the gathering that the site for the Vigil is profound with history, because the development of the atomic bombs began across the street from City Hall at the Manhattan Project headquarters, at 270 Broadway.

Fay said, “As LGBTQ+ New Yorkers we join the rest of the human family this August 6th and August 9th in raising our voices to demand a world without nuclear weapons, for the sake of the children, for a future of hope. On this 76th anniversary of the bombing of Hiroshima and Nagasaki we say there is no Pride in bomb production. There is no Pride in raising the rainbow flag while investing in weapons of death.” 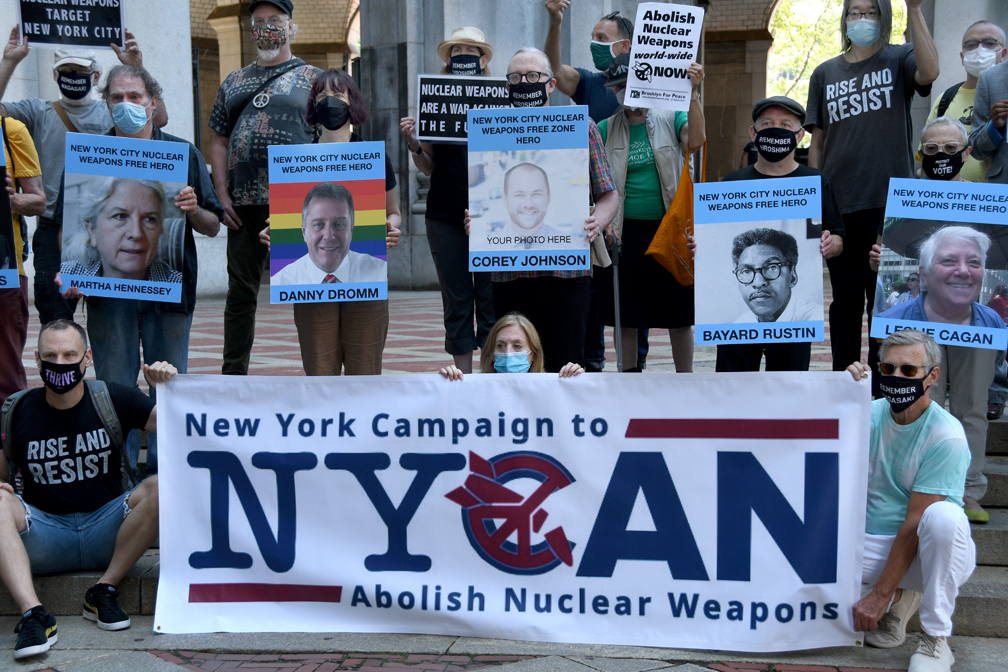 As the LGBTQ+ community honors and remembers the victims of Hiroshima and Nagasaki, we cannot in good conscience participate in the funding and production of nuclear weapons. These funds and resources are needed to care for People with AIDS, for the millions here and around the world waiting for access to life-saving vaccines, for LGBTQ youth in search of a home, for people living with sickle cell disease, for those without a place to call home or enough to eat. We must invest in healing and saving lives rather than threatening lives. … Eyes opened, hearts broken ours is a cry to rise for another world, another way of being human together.

Fay said, “We call on Speaker Corey Johnson and the City Council to vote and urgently pass Res. 976 and Intro.1621 to divest pension funds from nuclear weapon producers and reaffirm New York City as a Nuclear Weapons Free Zone. The legislation introduced by Council member Danny Dromm already inspired a historic hearing in City Hall and has the support of a majority of the City Council. As New Yorkers this is our moment to make hope and peace possible for a new generation.”

Robert Croonquist, retired NYC public school teacher, gay activist and pensioner said, “Speaker Johnson, it is up to you and you alone to realign New York City’s priorities to our progressive values, both fiscally and morally. I spent my career teaching the youth of New York City how to create a better world. My pension must not be invested in their destruction. NYC can send a powerful message to the world that we prioritize human needs over nuclear violence.”

Fay said they are determined to see the legislation pass this session and that it becomes the legacy of New York City in 2021 as Speaker Johnson and CM Dromm end their terms in government.

Resolution 976 calls on the Comptroller to instruct pension funds to divest from companies involved in the production of nuclear weapons (approximately $475 million dollars) and re-affirms New York City as a Nuclear Weapons Free Zone.

The Treaty on the Prohibition of Nuclear Weapons, adopted by 122 countries in 2017, makes nuclear weapons comprehensively illegal and became international law on January 22, 2021. 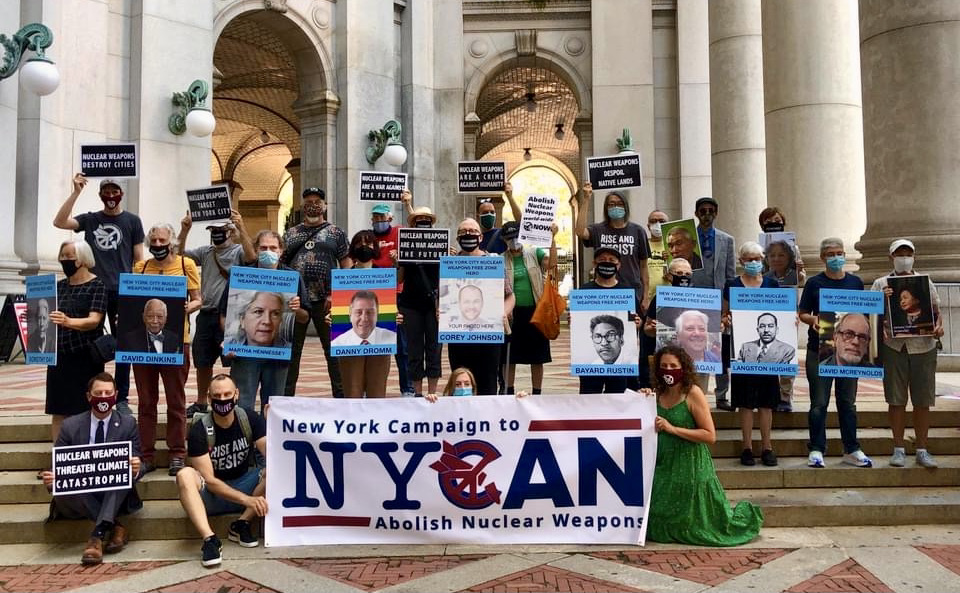