for the healing of the nations. Its arms out reach beyond

the borders of epochs and memories

through their wounds until they are restored to the root and bear great fruit.

with syrup and sorrow, laughter and laments that those

who thirst can drink. there was a man touched in the eyes

by the finger of God and the dirt of the earth. and what did he see?

He said, I see men as trees and again his eyes were revived

where poets perch themselves to pursue the winds with their

such a time to be released. I know of a man strong as tree like this

who has become the arms for eagles and sparrows, and the shade

for the heavy laden and sweat drenched weary. oh, what of a name?

who has become the very poems that were planted deep

within and broke their heads in death that voices may rise

in an off shoot and grow among the wars and wind. If they ask him

what great oak are you? Sycamore or weeping willow? How do you do it?

bleed and still be? give yourself to the weather of things even when you’re weary?

and gives you back semicolon, He places your thought on the road not taken

He softly said, son of sonnet, dactyl daughter : I turn the key

And the kissing booth closes for the night—(1)

buried in the silence of notebook and there came a poem

there came a hand of a man and he said to me what is your name?

He took a pen and wrote to me, like a key and uncuffed me

from the shackles of soiled pages, He said do not be afraid

I have heard your voice. It is a soulful ache like Nina but a sharp

will learn to use it even though you are the least of them, Girl

like Gideon, get up and groan, your sound is a new song.

who in assonance assisted me and affirmed me.

he said, maybe if you could see yourself/ from a distance/

and many poems passed, and he pressed me like an olive for wine

I cried in class many times, but he said, be …the signature on the dotted line,/

after throwing up my thesis He said, there you go now, pick up your crown

there is viciousness in your voice and valor, take off your mask even with

your marred mouth make a sound, pull the papers, taut your pen and push.

So I became. I became what I birthed. I bowed my head to the crown and his

arm lifted me into the tree. He said now you must go but I didn’t want to leave.

Yet in the outstretch of my wings and opening of my beak, these poems pursued the

wind and like an eagle wide as the sky, they became flying scrolls. I give thanks in the ink

because I know in the casting of my crown, in the classroom of many where I was nobody

the seed was watered, and I became somebody. So now, I know someday, the same I will

become, in like manner, the same tree. arms wild and wide with assistance, and discovering

the new sound of voices in the wind setting them flame and forth like a song. You were my teacher and

turned me like page till a tomorrow came. Tested me and tore me from treachery. In my trouble you

always saw the new testament in me. You said write it. Warsh, I will because you were a tree that let

down your branches for me to perch, pushed me to fly and in your arms of assistance I found freedom

from the resistance. You venerated my voice and crowned me continually so I became, and I have

become the poet who once was, am and will become worthy of the crown. To the heavens I give my

medicine in your leaves. Here I am now, a breaking seed. soon to become a likened tree. oak, sycamore,

weeping willow, who knows? but the scrolls yet I bow my soul. to be and become. 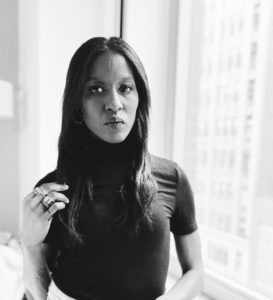 Lydia Flores is a poet, scribe, teacher photographer & a multitude of mysteries with a heart for the nations. Her work has been featured in Quail Bell Mag, Z Publishing House, Pulse Voices & several others.