There are a number of hurdles to clear before you can get people to support banning armed drones or surveillance drones. One is the existence of good drones.

It seems silly, but it is the number one cause of failures to pass local resolutions against drones. Unlike some of the hurdles, this one is fact-based. It’s simple-minded, but fact-based. There really are drones for fire and rescue and science research and toys and lovers of technology and even peace activists tracking weapons shipments. But we can ban selling deadly poisonous mushrooms even though other mushrooms taste great in pasta sauce. We can allow cooking those mushrooms in a frying pan even while banning hitting your neighbor in the head with that frying pan. We can ban killer drones without banning toy drones. We can even devise ways to ban drone surveillance without banning drones with cameras, if we put half as much effort into it as goes into creating drones. 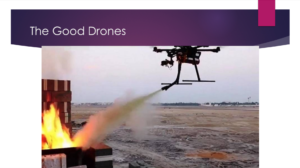 Another big hurdle is what people (at least in the United States) imagine drones do, which is wildly different from what drones actually do. People imagine that killer drones are used against identified targets who have been convicted of horrible crimes in absentia, who cannot possibly be arrested, who are in the very act of committing mass murder of those most valuable beings on earth (U.S. citizens), and who are alone in their nefarious lairs far from any innocent people whom it might be unnecessary to blow up. None of this is true. But we’ll never ban drones as long as people believe this fantasy, co-produced by the Pentagon and Hollywood. 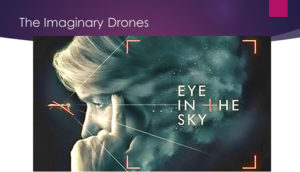 An additional hurdle on the way to banning all killer drones is the idea that all we need to do is ban drones that are fully autonomous. A drone that decides on its own when and where to launch a missile is unacceptable, while a drone that relies on some future suicide risk being ordered to push a button is acceptable. While I’d be happy to ban any particular type of deadly weapon, normalizing non-fully-autonomous drones is simply nuts. It violates laws against murder, laws against war, and the core of basic morality. 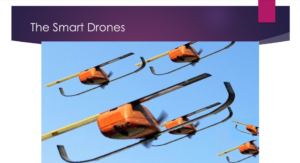 If I search on Google for the words “drones” and “morality” most of the results are from 2012 through 2016. If I search for “drones” and “ethics” I get a bunch of articles from 2017 to 2020. Reading the various websites confirms the obvious hypothesis that (as a rule, with plenty of exceptions) “morality” is what people mention when an evil practice is still shocking and objectionable, whereas “ethics” is what they use when talking about a normal, inevitable part of life that has to be tweaked into the very most proper shape. 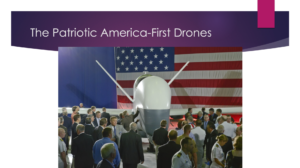 The U.S. exports more weapons than it buys and fights all of its wars against U.S.-made weapons, yet people get teary-eyed, flag-loving, and viciously patriotic at the very mention of the weapons industry. Not only are drones, like other weapons, not uniquely identifiable with star spangled nationalism, but the U.S. military is now in wars with drones on the other side, after having been a leader in the proliferation of drones and the promotion of a drone arms race — including through intentional sales and through the apparent capture and reverse engineering of U.S. drones. One study finds that five nations have now exported armed drones, while dozens of nations and some non-nations have imported them. A report finds over three dozen nations with armed drones. 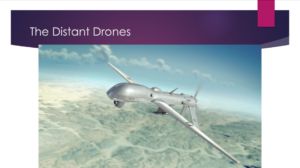 Armed drones are imagined far away. “Would you rather have a real war?” people ask. “At least with a drone war, nobody gets killed.” People who count as nobody are often far away. But, of course, drone bases are attacked. Militaries that use drones generate more enemies than they kill. Drone pilots commit suicide. Drones surveille Black Lives Matters rallies in the Indispensable Nation itself, and its borders, and anywhere within flying distance of those borders, they do test flights and sometimes crash in U.S. towns, and local police departments adore them. 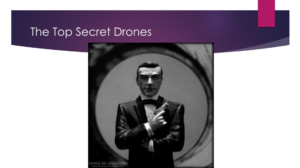 Drones are secretive, presidential, imperial, employed by people wiser and with better information than mere humans have. It’s best for us not to question. If there weren’t a good reason for the drones, why would they be sending people to prison for telling us what the drones do? This, too, is propaganda that must be overcome. 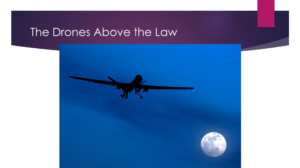 Drones are special, above the law, outside the law. Like Henry V or Karl Rove they make their own laws. War is illegal under the UN Charter and the Kellogg Briand Pact. Murder is illegal in every corner of the world. Why redundantly ban weaponized drones? The answer, or course, is for the possibility of getting that new law adhered to by some parties. Drones offend some people because they’re cowardly or unfair, but they should offend us because they make murder easier, and we should be outraged by the reason they make murder easier, namely the idea that people who don’t matter can be slaughtered without risking the life of anyone who matters. 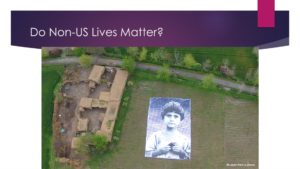 With miles and miles yet to go, we have seen definite movement in U.S. corporate media on respecting the value of black lives as long as those black lives are U.S. black lives. The drone problem could be addressed if the other 96% of human lives were thought to even somewhat matter, and there would be no drone problem to worry about if they were understood to matter fully. 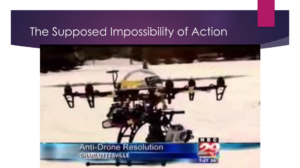 All is not hopeless in the world of anti-drone activism. In my town of Charlottesville, Virginia, in 2013, we successfully urged the city council to pass a resolution against drones. It said: “The City Council of Charlottesville, Virginia, endorses the proposal for a two year moratorium on drones in the state of Virginia; and calls on the United States Congress and the General Assembly of the Commonwealth of Virginia to adopt legislation prohibiting information obtained from the domestic use of drones from being introduced into a Federal or State court, and precluding the domestic use of drones equipped with anti-personnel devices, meaning any projectile, chemical, electrical, directed-energy (visible or invisible), or other device designed to harm, incapacitate, or otherwise negatively impact a human being; and pledges to abstain from similar uses with city-owned, leased, or borrowed drones.”